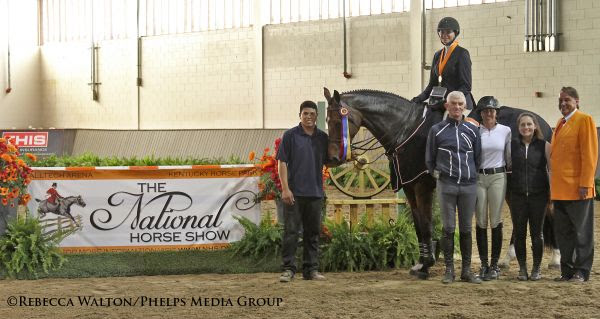 In order to earn their chance to participate in the esteemed finals, the riders first competed to qualify through the Regional Championships held in eight different regions of the United States. Winning their respective regions this year were Katherine Bundy, Maya Nayyar, Grace Boston, Brian Moggre, Trinity Hammerschmidt, Lanie Walkenbach, Rachael Davis and Sydney Hutchins.

The ASPCA Maclay Horsemanship class has been held since 1933, and it is one of the most prestigious competitions for junior riders in the United States. Among previous winners are some of the biggest names in equestrian sport including William Steinkraus (1941), Frank Chapot (1948), George Morris (1952), Leslie Burr Howard (1972) and Nicole Shahinian Simpson (1992). The 2013 ASPCA Maclay Finals winner was Lillie Keenan, while Tori Colvin claimed the title in 2014. Most recently, it was Mckayla Langmeier who earned the championship during the 2015 National Horse Show.

This year, the highly competitive Region 1 Finals were held during the American Gold Cup at Old Salem Farm. The win went to Katherine Bundy of Westport, Connecticut, who, for the second year in a row, edged out the field of 70 contestants to take home the blue ribbon. The second-place ribbon was awarded to Eve Jobs of Palo Alto, California, while Coco Fath of Fairfield, Connecticut, brought home third.

The blue ribbon in the Region 3 Finals went to Grace Boston of Baltimore, Maryland, with Olivia Woodson of Wellington, Florida, taking home second. In third was Elizabeth McKim of Vonore, Tennessee.

Coming away with the Region 4 victory at the Kentucky National Horse Show was Brian Moggre of Flower Mound, Texas, while Emma Kurtz of Hudson, Ohio, earned second and Paige Matthies of Lake Leelanua, Michigan, finished in third.

The Colorado Horse Park hosted the Region 6 Finals, where Lanie Walkenbach bested the field to take the win. Finishing in second was Jaden Olsen, while Allison Zimmerman came in third.

Also on the west coast, Sydney Hutchins won the Region 8 Finals at the Blenheim Fall Tournament. Kayla Lott earned the second-place ribbon, and Emma Marlowe rounded out the top three.

Qualified riders now have their sights set on the 2016 CP National Horse Show, where the ASPCA Maclay Horsemanship Final presented by Chansonette Farm will be held over two days. The first round kicks of at 5:30 a.m. on Saturday, November 5, while the final round will be held on Sunday, November 6.

All riders who qualify for the 2016 ASPCA Maclay Finals are eligible to apply for the Leo Conroy Maclay Grant. Now in its second year, the Leo Conroy Maclay Grant was created to commemorate Conroy’s loyalty and dedication to the National Horse Show and to the ASPCA Maclay Finals. The grant will be awarded to up to five (5) Maclay riders who demonstrate a financial need in order to participate in the Maclay Finals at the 2016 CP National Horse Show.

Beginning September 17, applicants can apply for the Leo Conroy Maclay Grant by clicking here, completing the form with the information outlined above, and attaching their essay. All applications must be completed and submitted through the National Horse Show website. No hard copy applications will be accepted. Applications will be accepted between September 17, 2016 and October 7, 2016. Applicants will receive a confirmation email when their application is received, and will receive a response by October 17, 2016.
For further information on the Leo Conroy Maclay Grant or the CP National Horse Show, click here.

BackGate is Creating Horse Show Technology for a Cause