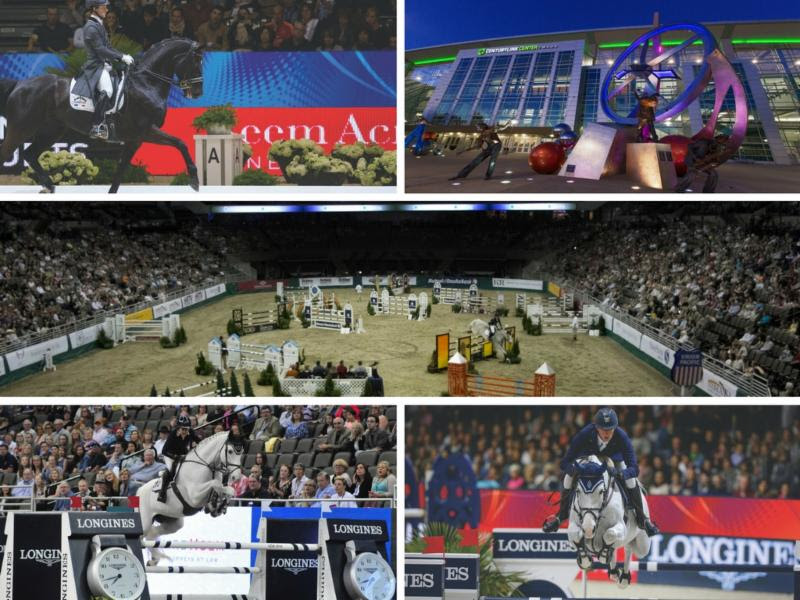 PRESS RELEASE
Omaha, Nebraska – October 4, 2016 – In less than six months, the vibrant city of Omaha will host the 2017 FEI World Cup Finals™, an elite Championship competition that features both the Longines FEI World CupTM Jumping Final and the FEI World CupTM Dressage Final on March 29 – April 2, 2017. It’s not only a unique opportunity to watch the world’s best jumping and dressage horses and riders compete under one roof at the magnificent CenturyLink Center, but it’s also a chance to experience a true Midwestern gem, complete with an abundance of attractions, top restaurants, hotels, museums and much, much more!
“We are so excited to welcome people from all over the world to the 2017 FEI World Cup™ Finals and to show them what an incredible city Omaha really is,” said Lisa Roskens, Chairman of the Omaha Equestrian Foundation which is producing the 2017 FEI World Cup Finals™. “There is so much to do and see in Omaha.  Whether you are a gourmand, fan of the arts or just like to shop, we have it all!”
Just a short walk from the CenturyLink Center is the Old Market Entertainment District, where

Omaha’s legendary steakhouses are guaranteed to satisfy even the most discerning steak-lover. Whether you want flame-broiled, wood fire-grilled or whiskey-doused – Omaha’s got you covered! If you are a foodie and steak isn’t your thing, jump on the Omaha Culinary Tour, featuring signature tasting tours with unique culinary experiences that will have you thinking you’re in heaven as you take a bite out of the city!
Omaha’s Henry Doorly Zoo and Aquarium is consistently ranked as one of the world’s best zoos

and is the ultimate interactive zoo experience. The 130-acre zoo is home to the world’s largest indoor desert and the largest indoor rainforest in North America with more than 7 acres of indoor exhibits. Explore exotic locations and underground caves and see thousands of animals from across the globe in their natural habitat. It’s ‘The Lion King’ come to life!

Omaha’s Craft Beer Breweries are famous all over the world. Taste what everyone is talking about, and even create your own tour of Omaha’s craft breweries by downloading the app on your mobile phone. Cheers!

To find even more for fun in Omaha, just follow the pins! The top 15 Omaha attractions are marked with Giant Blue Push Pins, making the top spots easy to find. Take a stroll across the Bob Kerrey Pedestrian Bridge, the first and longest pedestrian bridge to link two states – Nebraska and Iowa. The 3,000-foot long walkway stretches across the Missouri River, giving pedestrians a spectacular view of Omaha’s skyline.

To find out more exciting things to do in Omaha, visit www.VisitOmaha.com where you will find a list of hotels, restaurants, things to do, events and even an Omaha Savings app! You can also download a free copy of the Omaha Visitor’s Guide.
Started in 1979, the FEI World Cup™ Jumping Final is an annual international showdown among the world’s best show jumping horses and riders. In the 38 Finals held through 2016, Germany (10) and the United States (9) have emerged with the most titles. Previous FEI World Cup™ Jumping Finals held in the United States include Baltimore (1980), Tampa (1989), Del Mar, CA (1992) and Las Vegas (2000, 2003, 2005, 2007, 2009, 2015). Top competitors may include 2012 Olympic gold medalist and two-time FEI World Cup™ Champion Steve Guerdat of Switzerland, who will have the opportunity to defend the back-to-back titles he won in 2015 and 2016, while top U.S. rider Rich Fellers could potentially be making his tenth FEI World Cup™ Final appearance and possibly with the legendary chestnut stallion Flexible, aboard whom Fellers has competed in eight FEI World Cup™ Finals and won the championship in 2012.
The FEI World Cup™ Dressage Final was first held in 1986 and features the world’s best dressage horses and riders. A total of 31 Finals have been held through 2016, and the United States has won the championship twice – in 2003 (Debbie McDonald with Brentina) and 2009 (Steffen Peters with Ravel). The Final has been held in the U.S. six times, in Los Angeles (1995) and Las Vegas (2005, 2007, 2009, 2015).  2016 FEI World Cup™ Dressage Champion Hans-Peter Minderhoud of The Netherlands will have the opportunity to defend his title, but there will be many other top competitors who will be looking to have their name engraved on the trophy. Two-time World Cup Champion Charlotte Dujardin of Great Britain, the reigning Olympic, World and European Champion, may seek to reclaim the titles she won in 2014 and 2015, while top American rider Steffen Peters, could also regain the World Cup Championship that he won in 2009. Fellow U.S. rider Laura Graves may also have a great shot, having placed fourth at the 2015 Final in Las Vegas and again at the 2016 Rio Olympic Games.
Wednesday, March 29, 2017 will feature the Jumping Warm-up at 9:30 AM and the Dressage Warm-up at 2:00 PM.  Actual competition will begin on Thursday, March 30, with the Dressage Grand Prix starting at 1:00 PM and Jumping Speed Class at 7:00 PM.  On Friday, March 31, the Dressage Freestyle Rehearsal will be held at 9:00 AM with the Dressage showcase starting at 3:00 PM followed by the Jumping Grand Prix at 7:00 PM. On Saturday, April 1, the Dressage Freestyle to Music – the event determining the 2017 FEI World Cup™ Champion – will begin at 2:00 PM, with the Jumping Grand Prix competition at 7:00 PM. On Sunday, April 2, the Final Jumping competition will begin at 2:00 PM, which ultimately decide who will be crowned the 2017 FEI World Cup™ Jumping Champion.
For more information about the 2017 FEI World Cup™ Finals, hotels, and ticket information, please go to www.OmahaWorldCup2017.com.
The 2017 FEI World Cup™ Finals are being produced by the Omaha Equestrian Foundation, a certified 501c(3) not-for-profit foundation. The focus of the foundation is to foster and develop international caliber athletes within the equestrian sport as well as supporting and educating the community. Since 2013, The Omaha Equestrian Foundation has donated tickets to local charities and last year created field trips for over 2,400 elementary school students, veterans and local military families. The OEF also runs the International Omaha, an annual top-level jumping and dressage competition also held at the CenturyLink Center in Omaha, Nebraska.  For more information about the Omaha Equestrian Foundation, visit http://www.OmahaEquestrian.comor call 402-444-1630. For more information about International Omaha, please visit www.InternationalOmaha.com.

Betting Expansion Should Enhance The Thrilling Spring Racing Season In The U.S.

Advice to Young Riders: Get an Education

Equestrian Influencer Britt Sabbah is Not Afraid of the DIY Horse...

Adrienne Lyle and Harmony’s Duval Do it Again to Win FEI...