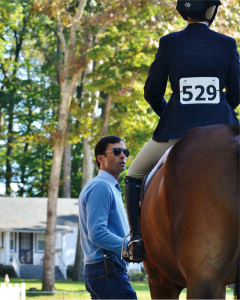 In April of 2016, Andre Dignelli took a small group of riders to a local, one- day show. He could not remember the last time he had done that, and it may have changed his professional future. Most of the public knows Andre as a superlative, elite trainer. His resume is a who’s who of current and rising stars: Kent Farrington, Tori Colvin, Lillie Keenan, Reed Kessler. But, those of us who have been in the business for decades remember Andre’s story. As Andre states, “I have never forgotten where I came from.” One of three sons of a middle class family, a young Dignelli kept his horses in his back yard and did all of the work himself. As a junior rider, he arrived at Judy Richter’s Coker Farm with abundant talent and excess work ethic. He and his brother, Michael, drove their two horse trailer with a borrowed horse of Richter’s to the 1985 USEF Talent Search Finals. An unknown and a dark horse favorite, he drove home with a blue ribbon.

A star is born and a career is launched. Fast forward 31 years and multiple national championships, and the king of big equitation wants to turn the clock back. Sort of. The experience of the day at the local horse show was an awakening for Dignelli. He was dismayed to find a huge disparity in the quality of competitors between the local and top levels. He discovered that the local show circuit was no longer the training grounds for young riders and green horses to obtain the good skills and positive experience that would lead them to the next level. The modern horse show circuit is one of “box shows,” large events with multiple divisions that offer something for everyone. Short stirrup and green riders go to the same shows as the higher level hunter, jumper, and equitation riders. Who is cultivating the local show circuit? Who is creating solid fundamentals and an educated start to the sport of riding? For Dignelli, the need was apparent.

“I am part of the problem,” he explains. “I don’t go to many local shows anymore.” He was struck by what he labels the “Great Divide” between the skills of kids competing at lower level shows and kids competing in comparable divisions at the larger horse shows.

Excellence, talent, and hard work are indisputably the ingredients of success. But, the clay that molds the cast is opportunity. Not opportunity to buy expensive horses and equipment, but opportunity to learn. In any endeavor- academic, athletic, artistic- great instruction is an essential component. For Dignelli, it is the piece missing for many young riders across the country. And, so, the Heritage Fundamentals Program is born. The excitement in Dignelli’s voice when he describes the program is palpable. “I am inspired by talent and motivation and good horses and good people. I always have been.” The Heritage Fundamentals Program

is Dignelli’s attempt to reach out to young riders whom he calls “the middles.” These are kids who are committed to the sport, have a level of family support, and wish to attend primarily local horse shows and a few travel shows. They are not the kids who spend their entire winter in Wellington, FL, or their summer break traveling up and down the east coast circuit. The riders that this program targets are the very ones Dignelli saw at the local horse show. He is offering to riders who need a more regional presence the opportunity to benefit from the unparalleled excellence in coaching and facility offered at Heritage Farm. “I would like to give these kids a program and a place.”

Within a few days in August, 2016, Andre Dignelli watched Caroline Passarelli win the USEF Pony Medal Finals and Kent Farrington jump two clear rounds in the Olympic Games. What did the performances in Lexington, Kentucky and Rio de Janeiro, Brazil have in common? Heritage Farm shaped the careers of both riders. The significance of the parallel arc of success for these riders on a hot week in August was not lost on Dignelli. In the case of both Farrington and Passarelli, Heritage Farm provided a place and a program for them as developing riders. Farrington was a working student for Dignelli and rose to the top of the junior ranks, including winning the Washington International Equitation Medal Finals and the Pessoa/USEF Medal Finals. His career has remained on the same trajectory of excellence, as he was the highest placed American show jumper at the Rio Olympic Games. Passarelli is a fifteen year old rider who has blossomed under the tutelage of the Heritage staff, specifically Patricia Griffith and Dottie Barnwell-Areson. Joining Heritage in 2015, Passarelli found a place to hone her skills and gain experience, as evidenced by dual championships at the 2016 USEF Pony Finals.

Dignelli calls Passarelli the “poster child for the [Fundamentals] program. When I watched her win the Pony Medal Finals out of all those kids, I thought, here we go. Here was a kid who fell through the cracks and needed a place and a program. We gave her that and the results speak volumes.” The Heritage Fundamentals Program is offered as a full care boarding situation with all lessons and training included. The participants will have the opportunity to train with Dignelli and Griffith on a clinician basis, while benefitting daily under the tutelage of Hertitage’s other talented young trainers. In addition to riding lessons, the program will offer horsemanship clinics on weekends to educate the riders on the essentials of horse care, conditioning, and management.