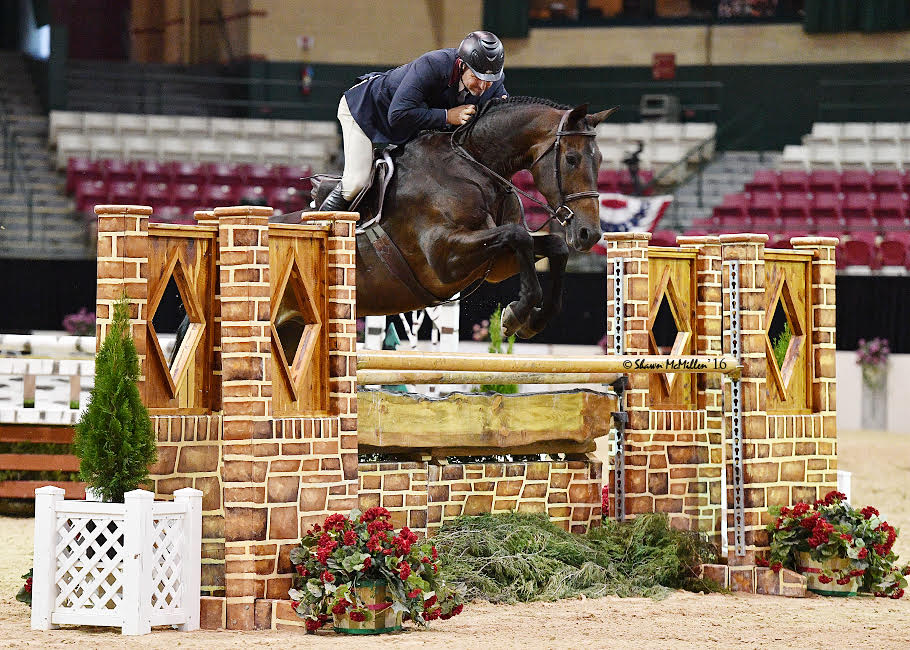 Athleticism, style, look and attitude are the attributes that every horseman looks for in a prospect. While it is difficult enough to assess these qualities while standing in front of a horse, it is formidable from a videotape. Yet, John Bragg saw all of those qualities in a video of an eight-year-old brown gelding from Germany that was to become Early August. Bragg received the video from his trusted contact in Germany, Johnson Horses and immediately was drawn to the horse. “Even with heavy shoes on, he had a beautiful gallop. And, with every jump, he had his knees under his chin.”

Bragg approached his friend and client, Ann Thornton, about purchasing the horse. Thornton has owned successful horses with Bragg throughout the years and trusted her trainer’s acumen. It was a leap of faith that was to pay off in spades.  Thornton explains, “John has such an eye for finding talented horses. Even though we had only seen him on a video, I trusted that. I remember him saying, ‘If you don’t buy him, I will!’ That pretty much sealed the deal.” Early August arrived at Bragg’s facility in San Juan Capistrano, CA in the spring of 2015. The horse relaxed into Bragg’s program of slow and careful training and began his show career in the Pre-Green Hunters in June of 2015. The horse was quiet, careful, and scopey. “[Early August] figured out the hunter thing very quickly. He moved right into a rubber snaffle and was always easy.” The pair was immediately successful in the 3’ and 3’3” divisions as Bragg looked toward moving up to higher jumps in the coming year.

In January, 2016, Early August was promoted to the 3’6” hunter divisions. The larger jumps and longer lines revealed the horse’s exceptional talent.  After making sure the horse was solid at the 3’6”, Bragg made the bold move up to the High Performance division in April. “I wanted to catch his interest a little more because we go to the same shows week in and week out. He hit the first two jumps and never touched a jump after that. He was Champion at that first show and he loves it.”

Competing in both the First Year Green division and the High Performance division, the duo earned Championship honors at almost every horse show.

Inspired by the talent and success of his mount, Bragg brought the horse east to contest the formidable fall indoor show circuit. Beginning the tour at the Rolex Central Park Horse Show, Early August placed third in the Duchossois Cup. Shipping to Maryland for the Capital Challenge Horse Show, they were contenders in both the First Year and High Performance divisions, earning top placings in each. Bragg qualified to participate in the WCHR Pro- Challenge that pits the best hunter riders in the country against each other in a two round head to head competition. “I was pleased and honored to be in the class against that group of professionals.” His fifth place finish aboard his young horse was tremendously rewarding, although Bragg feels he could have given Early August a better ride. Humbly, he claims, “I got a little hurried thinking that I had to do too much. I didn’t show him off as well as I could have.” Buoyed by success, Bragg and Early August travelled to Harrisburg for the Pennsylvania National Horse Show. The horse continued to perform in his beautiful relaxed style and was rewarded by the judges with top ribbons.” The horse just got better and better each week. He figured it out and got such a good education throughout the indoor circuit.” Early August was Champion in the High Performance and Reserve Champion in the First Year Green division, a masterful feat. Heading south to the Washington International Horse Show, he bested his own record and was Champion in both divisions with numerous scores in the 90’s.

For both Thornton and Bragg, Washington International was the culmination of a lifetime of dedication and hard work. As an owner, Thornton was thrilled. “Never in my life did I imagine having a horse that I felt would be worthy of sending back to Indoors, much less with such success. Finishing up champion in both the First Years and the High Performance Hunters at Washington was so amazing! I was happy for John…he is so deserving, and I’m thrilled he got to go out on such a high.”