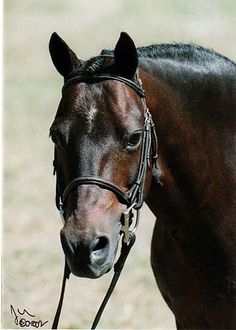 With the face of an angel and a devilish look in his eye, Farnley Dolphin was an iconic show pony. Bred by the famous Joan Dunning at Farnley Farm in Virginia, Farnley Dolphin carried many young equestrians in his thirty two years. He formed the foundation for success in riders such as Kaitlin Campbell, Daisy Farish, and Sophie Gochman. Talented and opinionated, Dolphin made sure that his kids did it right. His value was not measured solely in the ribbons he won, but in the invaluable lessons he taught. He was the consummate first pony. Campbell went to her first USEF Pony Finals in 2000 on Dolphin, Daisy Farish went to her first horse show on Dolphin, and Hannah Levick began doing the Pony Hunters on him. In November, Dolphin died at the Farish’s Kentucky farm at the age of 32. Upon his passing, we heard from several past riders and trainers of the special small Welsh pony.

“Dolphin came into my life in 1999. My trainer at the time, Patty Miller, called me on a Saturday morning and told us we had to drive to Harrisburg to try a pony immediately. He had shown in the small pony division and we were able to get him only because he had a drive by at an in and out. The rider only jumped the out of the in and out instead of the whole thing, and Patty told us that had that never happened before. She would have known to jump the whole thing, but never did!

[Dolphin] didn’t get a hack prize and had splints the size of golf balls, but I am grateful that he taught me the foundations of riding. My favorite part about riding Dolphin was that no matter where you went, there was always someone who had a Dolphin story, too.”

Kaitlin Campbell rode Farnley Dolphin for several years in the early 2000’s to tremendous success at all major horse shows. Kaitlin has since gone on to become a professional hunter, jumper, and Grand Prix rider.

“More than a decade ago, I had the pleasure of having Farnley Dolphin for a year. I say that I had him, when in actuality, he decided to have us. Dolphin was very opinionated in every aspect of his life, and did not suffer fools well.

Having Dolphin was like being the curator in a museum- you cared for him, admired him, and learned from the experience. He was with us for a year and then off to the next kid, four inch spurs and all.

For Hannah Levick and me, the year of Dolphin held many ups and downs. That season at WEF saw two sections of small ponies. Hannah was just starting out in the Regular Division and learning the ropes of pace and timing. What better teacher than Dolphin? If you could wind him up in the courtesy circle and make him use the end of the ring, he could win anywhere. And, he did. I will always remember the look on that quiet, lovely child’s face when she won her first class on him. As a trainer, it was one of the greatest moments.”

Sissy Wickes trained Hannah Levick on Dolphin in 2004, where she learned the ropes of riding in the rated pony divisions. “I leased Dolphin when I was 5 years old. I was always around horses, but was against riding them- until I had Dolphin. I just started learning how to trot and we were planning to go to a show two weeks after I had started riding him. There were no classes below the short stirrup, so I just went in a kicked around! He was honestly the best pony a kid could have to learn on. After I literally kicked and screamed when they told me another kid was going to lease him, I was fortunate enough to have him come back and retire at my farm in Kentucky. Being able to spend all of his last years feeding him lots of McDonald’s Apple Pies (yes, those were his absolute favorite), grass, and treats was more than I could ask for.”

Daisy Farish began her riding career on Dolphin and showed him in the Short Stirrup hunters through 2008. Daisy has since gone on to be a successful rider in the Junior Jumpers and Equitation divisions. “Thank you, Dolphin, for the being the best pony a girl could ask for. Whether it was accidentally jumping roll tops to flying around cross rails, you were the sweetest pony. Have a good time eating hot apple pies in heaven, you will be missed by many.”

Sophie Gochman began riding Dolphin 2009, winning Devon’s Four and Five Year Old Leadline and moving on to crossrails and short stirrup. Since then, Sophie has become a very successful pony rider, winning championships at Devon, USEF Pony Finals, and all major indoor finals. This year, she moved up to horses and has had success in the Junior Hunter and Children’s Jumper divisions.

Farnley Dolphin is a pony that will not soon be forgotten. Some final words from Sissy Wickes: “Godspeed, Dolphin. I am sad to hear of your passing, but comforted by the knowledge that you were loved every day of your life. From Hannah and me, and all of those whose lives you touched, thank you and kick on.”