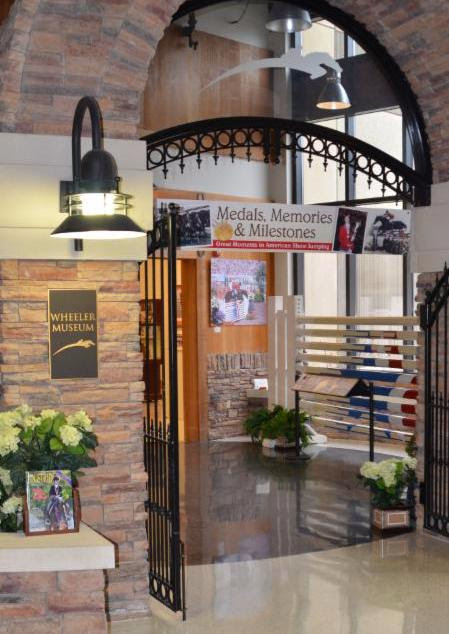 Entrance of the USHJA Wheeler Museum in Lexington, Kentucky.

Exhibit will run through November 2018

Lexington, Ky.—– Dec. 7, 2016 —– The first phase of the new United States Hunter Jumper Association Wheeler Museum exhibit, “Medals, Memories & Milestones: Great Moments in American Show Jumping,” is now open at the USHJA Headquarters in Lexington, Kentucky. The USHJA plans to continue expanding the exhibit into early 2017 to include interactive features, audio, video, and a catalog of books and articles on show jumping.

The exhibit is open to the public and features items and stories from the Show Jumping Hall of Fame, as well as new materials loaned by riders, owners, grooms, and fans, telling the stories of legendary horses and people who have helped shape show jumping as an international and national sport. “This exhibit offers something for everyone” said Kevin Price, USHJA executive director. “Providing both an educational experience and an opportunity for visitors to enjoy some of the greatest moments in show jumping history, we look forward to this phenomenal exhibit drawing many visitors to the USHJA headquarters. Many thanks to the many donors and volunteers who helped make this exhibit possible.”

Artifacts on display include original photos and personal mementos of horses such as Idle Dice, Calypso, and Gem Twist; commemorative plaques and coolers; ribbons and medals from U.S. riders’ successes at the Olympics and the World Equestrian Games; and trophies and medals from signature national events such as the Cleveland Grand Prix, the American Gold Cup, the American Invitational, and the International Jumping Derby. A special section featuring film excerpts from “Harry & Snowman” will include mementos loaned by Harry de Leyer and the film’s production team.

The exhibit follows the history of the United States Equestrian Team from its founding in 1950 through the 2016 Rio Olympic Games. On the national scene, the exhibit highlights the growth and importance for riders, owners and spectators of grand prix series, such as those organized by the American Grandprix Association and the United States Grand Prix League. The exhibit will also feature the history of course design and fun facts about special classes such as the Puissance and bygone pairs and “doubles and trebles” classes.

The USHJA Wheeler Museum is supported by individual donors to the USHJA Foundation, especially USHJA Foundation Legacy Circle Founders Kenneth and Selma Garber, the Gochman Family, the Hallman Family and Merrylegs South, the Oberkircher Family, and Roger and Jennifer Smith.

The exhibit is open weekdays during USHJA office hours and on weekends in conjunction with special events. For more information, please visit www.ushja.org/wheelermuseum.

Clintano Captures the Blue with Ki-Juan Minors in $2,500 USHJA National...