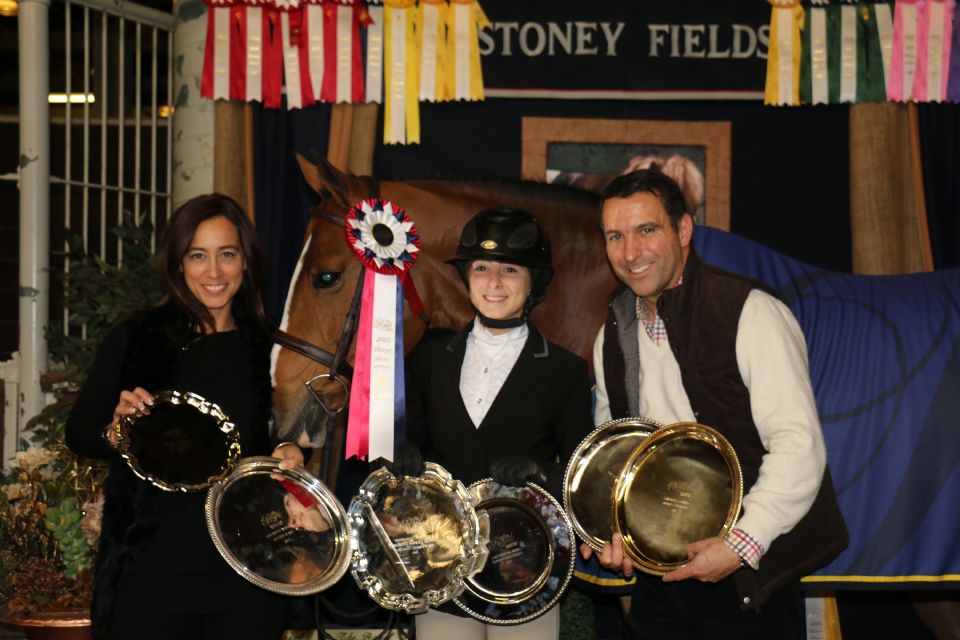 Leanna Lazzari (center) and Socialite with her parents, Dorothy and Paul, at the Royal Horse Show.
Photo Courtesy of the Lazzari Family

Leanna Lazzari, 15, of Mississauga, ON, was crowned the Children’s Hunter Champion and accepted the Rowfantina Collage “Skippy” Memorial Trophy as Best Junior Rider for the second year in a row at the 94th annual Royal Agricultural Winter Fair held from November 4 to 13 in Toronto, ON.

Lazzari began competing on the A-circuit at nine years of age and was soon climbing the ranks in pony and children’s hunter competition.  In 2013, she started training under the tutelage of Lois and Peter Mulligan and their daughter, Francesca, at Stoney Fields in Schomberg, ON.  Since then, Lazzari has proven to be a consistent winner, including earning five Royal Horse Show championship titles over the past four years.

“From the first day that she arrived at Stoney Fields, she demonstrated a work ethic far beyond her years,” said Lois Mulligan of Lazzari’s quest to continually improve.  “I’ve taught a lot of kids, and I’ve never had one with the dedication and eagerness to learn that she has.  Her drive is turning her into a horsewoman as well as a rider.”

Fellow trainer Francesca Mulligan wholeheartedly agreed, saying, “Leanna is always looking to improve her riding and educate herself, whether it’s by sitting down to watch 200 trips on-line from Harrisburg or studying videos of her own riding.  She always puts forth 150% effort, and that is one of my favourite things about her.”

Lazzari’s dedication has paid off with a long list of accomplishments to her credit.  In both 2013 and 2014, she was named the Ontario Hunter Jumper Association (OHJA) Medium Pony Champion riding Cherrybrook Just Blue In, owned by David Dowler.  In 2013, she won the Small Pony Championship title at the Royal Horse Show riding Morwel Hightide, a feat she would repeat in 2014 aboard Hillin Eira, owned by Cara Whitham.  Adding to her accolades at the 2014 Royal Horse Show, Lazzari also won the Medium Pony Championship aboard Cherrybrook Just Blue In.

Also in 2014, Lazzari was the OHJA Pony Power Handy Series Winner and made her debut at the United Stated Equestrian Federation (USEF) Pony Finals in Lexington, KY, with two mounts, Cherrybrook Just Blue In and Goldhills Arresting Charm, owned by Kelly Traver.

Success continued for Lazzari in 2015 when she won Children’s Hunter, Children’s Medal, and Children’s Pony Championship titles from the OHJA.  At the 2015 Royal Horse Show, she was named Children’s Hunter Champion after winning all three classes over fences and earning a score of 90 in the stake class riding Socialite, owned by Sidney Jefferson.  Her commanding performance earned Lazzari the prestigious title of Best Junior Rider.

Lazzari’s 2016 season got off to a slow start when she suffered an unfortunate ligament injury to her wrist that required surgery.  Not able to return to the show ring until August, Lazzari had only a few short months to prepare for the 2016 Royal Horse Show.  Despite the setback, Lazzari successfully defended her 2015 titles and was again named Children’s Hunter Champion riding Socialite as well as Best Junior Rider for the second year in a row.

“I only showed four times before The Royal,” said Lazzari, who divides her time between riding and her high school studies.  “To accomplish something like what we did this year at The Royal, after having not ridden all summer, was really exciting and unexpected.

“Winning at The Royal is so unique; it’s special to be part of something so grand!” continued Lazzari. “It’s a long running tradition that attracts so many people from so many different backgrounds. They all enjoy the horseshow. it’s exciting for everyone.”

Coach Francesca Mulligan added, “The atmosphere at The Royal is one that can’t be replicated at any other horse show.  There is nothing like the feeling that runs through you when you are standing in that chute.  Competing at The Royal is such a historic part of our industry in Canada, and is a real rite of passage.  This year’s honours truly embody Leanna’s entire year of hard work.”

Following her significant success riding ponies and children’s hunters, Lazzari now plans to transition into the junior hunter and equitation rings.  One of her mounts will be Cavallino, a horse that joined her string in the fall of 2014 as a green project.

“In the future, I would like to get into the big equitation in Canada and the U.S.,” said Lazzari of her goal for her three remaining years as a junior rider.

The Mulligan family and Stoney Fields specialize in developing young riders and ponies and, according to Francesca Mulligan, Lazzari has been a vital part of their program thanks to her ability to catch ride and bring along green horses and ponies.  The role is one Lazzari hopes to continue as she ages out of pony competition and moves up to the junior hunter ranks.

“To be able to bring along the young ones is always an accomplishment,” said Lazzari.  “To see how ponies and horses develop over the course of time helps you to build a relationship and a bond with them.  It has been a great experience and has taught me a lot.  I look forward to continuing to help the Mulligans and other people develop their ponies.  It is a big part of my riding, and continues to teach me a lot.”

With such enormous success to her credit as a pony and children’s hunter competitor, Lazzari will officially make the step up to junior competition in January when Stoney Fields resumes competition at the World Equestrian Center in Wilmington, OH.