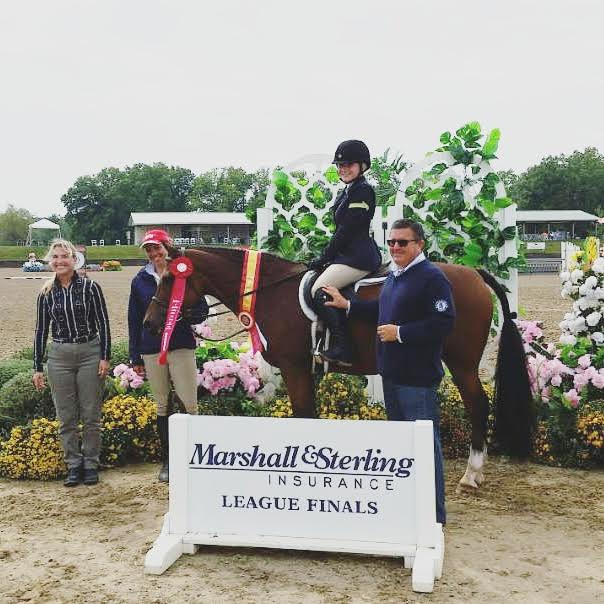 Leaving the ring at the Mid Atlantic Equestrian Festival with the title of the champion collegiate rider, Tempe Salatiello finished her junior year with a total of three championships in one week on her pony “Salham’s Biddle Bug,” or Boomer. What is perhaps unseen to spectators nearby is the path that Salatiello and Boomer took to MAEF and the short time in which she ascended to these victories. Growing up on a farm where her mother bred horses and ponies, Salatiello was accustomed to breaking and riding the “greenies,” in her words, from a young age. “I’ve always had a couple training projects to work on at once,” she says.

Boomer was different, though, as he was just regarded as a “backyard pony”. However, she saw something different in him, and broke him when he was eight years old and she was sixteen. She trained him herself for two years, and she was able to climb the ranks of the hunters in two years, culminating in the many championships in November of 2016.

Now, she and Boomer compete in the 2’6’’ equitation division and novice division after working hard on consistency while competing in horse shows around New Jersey.

Her success was not confined to MAEF, though, as she was champion at Garden State Horse Show in New Jersey, reserve champion at the Marshall & Sterling Finals, overall grand champion at HITS Pony Finals, ribboned in Zone 2 Finals, and placed ninth out of 90 riders at the Monmouth Hunter Derby in New Jersey.  The list of accomplishments that Salatiello and Boomer have racked up over the past two years is impressive.

Her story continues behind the scenes, where her work does not end. She says, “I have never had a groom,” implying the work she has done in order to hang all of those ribbons in her room. It doesn’t end with the ribbon award. Rather, it ends with mucking Boomer’s stall, feeding him, and leaving the barn after almost all of the other competitors. She reflects on her experience. “Boomer has helped me conquer [my challenges]. I never knew how far hard work could bring me and my backyard pony; that we could build up a name for ourselves and just focus on the fun of showing at the same time.”

Salatiello’s path to victory was clearly special, breaking her pony at an older age, doing all her grooming herself, and becoming a fierce competitor to the ready-made ponies at horse shows around the country. She is proof that it takes hard work and long nights to become successful in this sport, and she did it all herself: “I hope all equestrians can hear and learn from my experience, and especially my fellow junior riders.”

Walking out of the ring at MAEF and ending her junior career, Salatiello looks back upon victory after victory with the pony that no one thought had enough quality to show. “It’s amazing how much you can accomplish with hard work,” she concludes.

The Less Than Ideal Show Environment