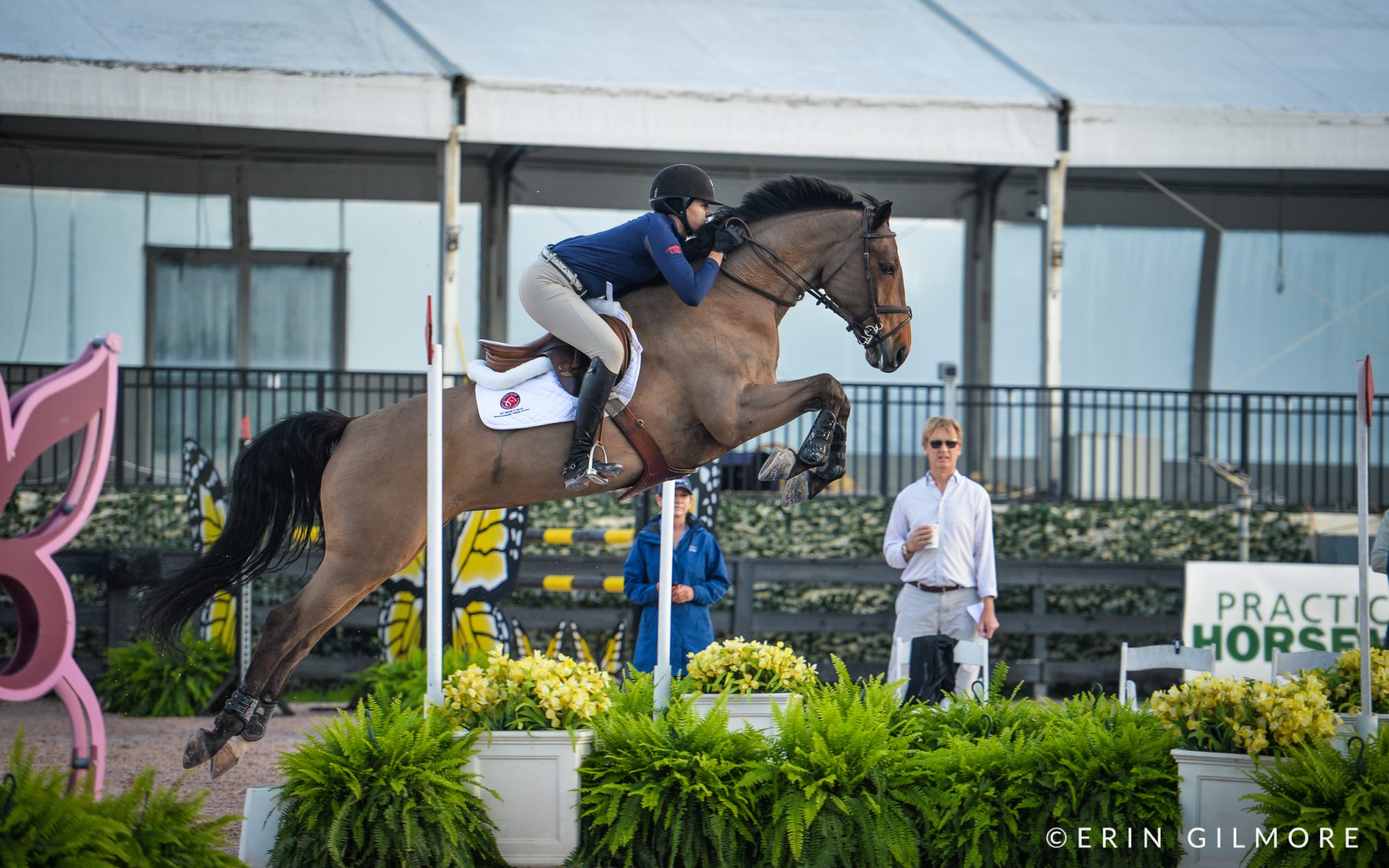 Riders had to kick into high gear or fall behind on the third and final day of the George H. Morris Horsemastership Session in Wellington, Florida. Laura Kraut led a mock Nations Cup competition that served up a tough, two round track and plenty of teachable moments.

Imagine being a junior rider and having Olympic veteran Conrad Homfeld design your course. Imagine that Anne Kursinski is your coach, and Laura Kraut is watching every move you make, in order to publicly critique your ride after you’re done.

This was the reality for the 12 participants in the GHM Horsemastership Session, and whether they jumped clear or fell off, all were subject to the same attention and analysis in the main arena of the Global Dressage Festival show ground.

With impending rainfall on the way, the assembled crowd of spectators was thin but the energy of the morning was much more intense as riders warmed up and rode in a rotational order to mimic a Nations Cup competition. Split into three, teams of four, Beezie Madden coached Team Red: Michael Williamson, Gracie Marlowe, Riders were as prepared as they could be to jump the Nations Cup track after being put through their paces during the previous two days of flatwork, and gymnastic jumping exercises. But with some riders on borrowed horses and some handling quirky rides, a simple day of jumping this was not. Clear rounds were few and far between in Round 1, and a tight time allowed instantly became a factor. TJ O’Mara, who was the only rider attending the clinic for the second year in a row, started things off with a clear round. But from there, riders rode too conservatively and picked up time faults, earning plenty of feedback from Kraut.

“When you’re too slow, you have to attack the next fence and be aggressive,” she told Gracie Marlowe.

“When you have the back rail of an oxer the first thing that should go through your mind is – I am weak. I need more leg. I want to see a lot more aggressive riding from you.” An open water midway through the track rode directly to a skinny vertical, and tested riders’ ability to stay focused, whether or not the water jump had gone well. That and a bending eight strides from a big oxer with Liverpool, to a double combination proved to be some of the most technical elements of the course.

Kraut came down on Cooper Dean for giving up and overriding when his horse had faults early on course, and quickly unraveled to take down three more fences.

“When you the last half of your course was overridden, it made the horse worried about you, and not about the course,” she explained.

However, those riders who didn’t have the Round 1 that they wanted—including Halie Robinson, who took a tumble at that double combination—showed impressive improvements when they returned for Round 2 after a short break. Halie’s horse, which was borrowed and which she didn’t know at all, was spooky in both rounds, but when she came back for Round 2, she was determined to get around the course.

“You learned that you can be tough and make something happen,” Laura complimented her.

“When something goes wrong, don’t give up. Dig in and make it work.” Cooper showed similar gumption when he returned with renewed focus, and a softer feel of his horse. While Anne
Kursinski’s teamed came out the winners and earned their tickets to the World Cup Finals, the day wasn’t about how many rails down a rider had or who jumped the best clear round. For every accurate distance and every big miss, Laura was there to break it down and point out what could be learned from the moment. By and large, it’s that added value that makes the annual GHM Horsemastership Session such a rich, valuable experience, not only for the riders, but for every one watching and listening along. You can watch the entirety of the 2017 GHM Horsemastership Session online for free at usefnetwork.com. Horses, Life and Change: Stepping Away From the Sand Box