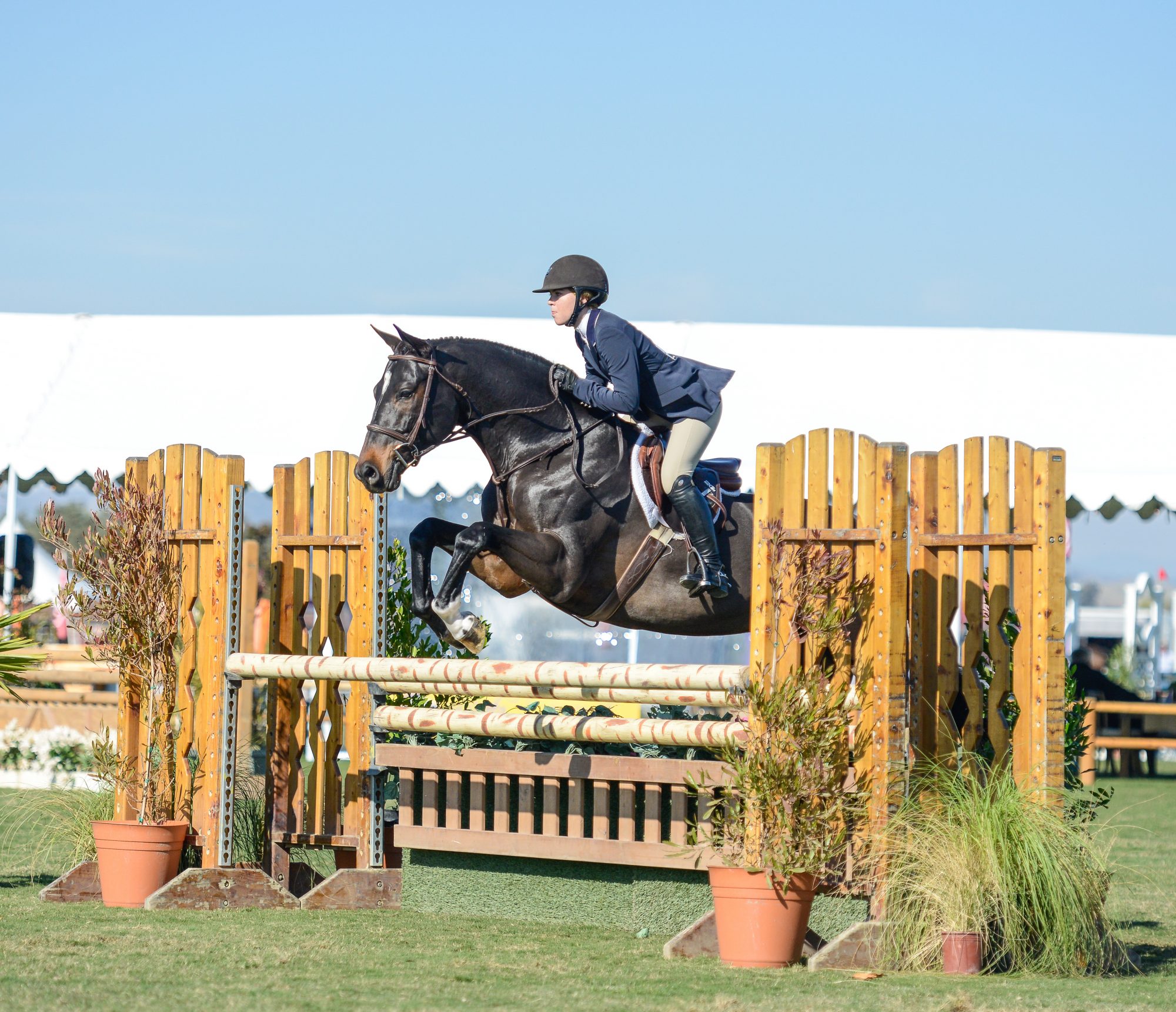 At the age of just 15 years old, Jillian Stuart, Rancho Santa Fe resident has taken multiple championships this past year, including Grand National Champion in the Junior Hunter’s 15 and Under division.   Dominating the national division composed of 430 horses across the country, Jillian took the combined national title for the Large and Small Junior Hunters, all of this in her first year competing at this height.

This past weekend, in Lexington, Kentucky, Jillian accepted the two trophies at the US Equestrian National Awards Banquet where the nations’ top owners and riders gathered to celebrate the sport.  Jillian also won the United States Equestrian Foundation’s Zone 10 award for the Top Junior Rider.

Jillian’s horse, Andover took the coveted title of Horse of The Year.  Andover has been a part of the Stuart Family’s stable, Magnolia Farms, for the past 4 years, with all the Stuart sisters riding him at one point.  Andy, as he is called in the barn, was originally purchased as a 5-year-old for Savanah Stuart and they went on to take the national title of World Champion Hunter Rider in 2014.   Mikayla Stuart, piloted Andy in his first year of the 3’6” division before turning him over to Jillian.

Skip the hassle and get more money when you sell your totaled car easier and faster with the experts.

Two weeks ago, Jillian traveled to the Pacific Coast Horse Show banquet in Las Vegas to take home the Large Junior Hunter 15 and Under trophy, Grand Junior Hunter Champion, as well as the JJ. Smith Perpetual trophy given to the high score rider out of the Junior Hunters and the Amateur Owners.

Jillian’s riding career started at the age of 5 and she immediately showed a natural talent, accumulating awards on ponies and the last few years graduating to showing horses.  Jillian is currently training with Philip Cillis of Westwood Show Jumping Stables.  Philip is an accomplished rider and trainer who has worked in the industry for over 30 years, competed in the Nations Cup representing the US, and is considered one of the best horsemen in the country.  “Jillian and Andover have been great to work with.  Both are true competitors and have the desire to win, and it shows.  I have been very lucky to be a part of this winning team,” said Cillis.

Of course the team that makes this all happen would not be complete without recognizing the time and talent of the Magnolia Farms Barn Manager and Groom,

Martin Rodriguez.  Martin maintains Andover’s health and fitness and is instrumental in making sure all goes as planned in the show ring.  A properly turned out horse is key to success.

This first year in the Junior hunters proved to be an outstanding one for Jillian, one that she never expected.  “It has been such a surreal year. I couldn’t have done any of it without the best partner I could ask for, Andover,” said Jillian.

This junior rider shows no sign of stopping.  Continuing to ride in the junior hunter division and now stepping into the jumper ring on her new ride Je Revé Van’t Merelsnest owned by Guillermo Obligado.