Home Blogs THE WITHERS WINERY- A Toast to Inspiration 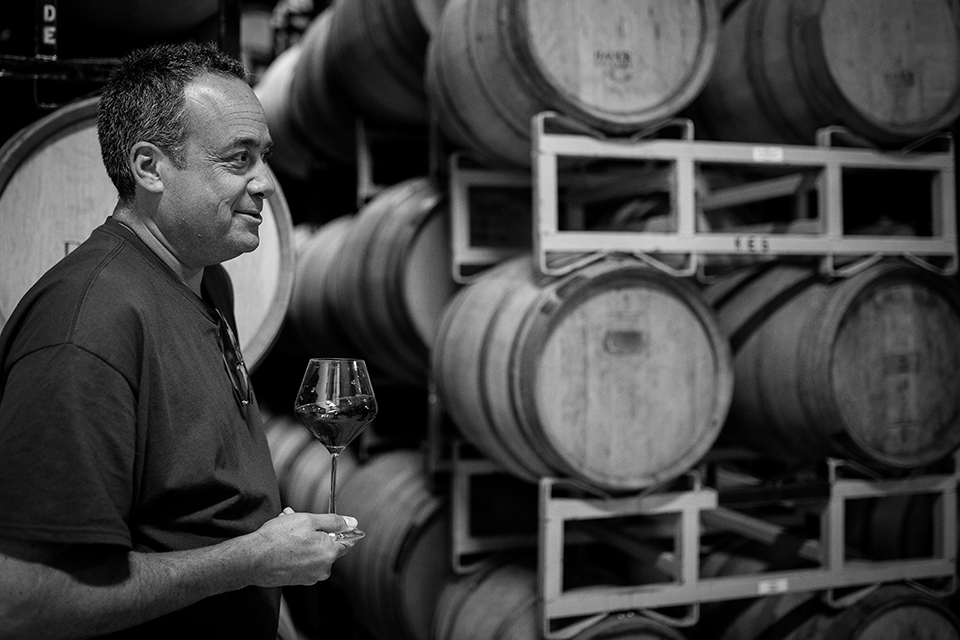 Find this story and more HERE in the TPH Feb. 2017 Stallion Issue!

For horse people perusing the wine racks of their favorite upscale wine store or paging through Wine Spectator, The Withers label will cause you to pause. A term recognizable to us all on a label displaying a beautiful grey horse in a snaffle bridle? What is this new wine and who is that horse? Meet Andrew Tow, self-identified “horse husband” and premium wine maker, whose wife Kathleen is owner of Mr. Burgess, the beautiful Connemara pony featured on the label. Mr. Tow is founder and owner of The Withers Winery based in Healdsburg, Calif. A lifelong wine enthusiast, Tow became a wine entrepreneur through what he calls a “happy accident” of timing and opportunity. Mr. Tow met David Low, a renowned winemaker, in California in 2006. After establishing a close friendship, Mr. Tow and Mr. Low together created “home brew” wines with fruit sourced from great vineyards on the Sonoma Coast and the Sierra Foothills. The collaboration between the two friends produced delicious Pinot Noir and Rhone- style blends. Tow made the wine for personal consumption, to share and enjoy with his friends. It was never intended for commercial use.

Consistently and repeatedly, Tow was asked, “Where can I buy this?” Often hearing rave reviews from friends, Tow decided to solicit an evaluation of his wine from industry experts. Residing in Westchester County, NY, Tow has easy access to New York City and the best restaurants and wine merchants in the world. Toting his label-less bottles of “home brew,” he trekked from store to store for wine tastings. “I brought the bottles with just Sharpie marks on them to tell us what they were. I showed them to people I knew who would give me honest answers and unvarnished opinions. I wasn’t dreaming about being in the wine business; I was just curious.”

The reaction was universally positive. Major retailers and restaurateurs raved about the wine, all wanting to purchase it. Tow was shocked. Intrigued with the prospect of entering the commercial wine business, he excitedly called his friend and winemaking expert, David Low. “Don’t do it!” was Low’s reaction. “Don’t start a winery. You will never make any money. People think that it’s easy and it’s incredibly difficult!” Prior to forming the winery, Tow was an entrepreneur in the media and telecommunications industries and accustomed to creating and building new companies. As he puts it, “I am used to hearing the word ‘no,’ and practiced at getting around barriers.” Despite Low’s attempts to discourage him, Tow put together a partnership and launched his own winery -just several years after producing label-less bottles for his own dinner table. Using his business acumen, his first success was convincing the talented, proven David Low to be his winemaker. Together, the friends have found meteoric success in the wine industry.

In 2013, The Withers label was launched and their first wines presented to the public. Drawing on years of marketing experience as well as passion for the wine itself, Tow devotes a large personal presence to the sales efforts. “I will never release a wine that I would not want to buy myself… We make a number of different wines, all high quality. When I go out and present them to top retailers and restaurants, I do not have a single doubt in my mind about the quality of our product, which allows me to rest at ease when I am pouring. Many of these people are among the most critical in the wine industry, yet we receive nearly universal respect from them. Most often, they agree to carry our wines.”

Since its inception in 2013, The Withers has grown from zero to produce 5000 cases of wine in 2016. Their Rosé, a wine lobbied for by Tow initially against the advice of Low, has garnered tremendous praise and received a score of 91 points from Vinous Media, among the most influential wine publications. The wine was also an Editor’s Choice selection from Wine Spectator and a Best Buys choice of the Wine Enthusiast. In 2014, it was named one of the five best Rosés from around the world by Lettie Teague, the highly influential wine critic for The Wall Street Journal, who later wrote a feature article on Tow and the winery. The Wither’s label is as beautiful as its wine is luscious. The horse featured is the handsome Connemara pony, Mr. Burgess. At twenty years old, Mr. Burgess became a member of the Tow family 15 years ago after he was given to the family by the owner of a local equestrian facility. Tow’s wife, Kathleen, is an accomplished equestrian who has studied dressage under storied greats Lendon Gray and Courtney King-Dye. Mr. Burgess, 14.2 hands of heart and athleticism, made an immediate impression on Tow for his temperament, willingness, and conformation. Initially, the pony was used for lessons for their daughters by a local trainer. When the trainer informed the family that Mr. Burgess was to be sold at auction, they were devastated. At that point in their lives, they were unable to put together a lump sum to buy the young pony, and offered a payment plan to keep him out of the auction ring. In a gesture of largess, the owner gave the pony to the Tow family who were shocked and overjoyed.

Mr. Burgess is a force to be reckoned with. He has the scope of a jumper, the movement and agility of a dressage horse, and the heart of a lion. “He is amazing- spirited, beautiful and elegant,” gushes Tow. “Kathleen says riding him is like driving a little sports car.”

When contemplating the name for his new winery, Tow thought of combining his passion for wine with the family’s passion for horses. He heard the term “the withers” years ago and liked the unique sound of the phrase. As the point from which horses are measured for height, Tow thinks that the symbolism mirrors his endeavors in the wine industry. “I do not measure wine numerically, as in with a score. For me, it is an experiential evaluation. I remember wine by where we were when we popped the cork, what we were eating, and whom we were with.” He sees the analogy of a place from which horses are measured for height and striving for qualitative height in his wines. The font is a nod to ancient winemaking and equestrian traditions, yet with a modern twist. The image of Mr. Burgess on the label is painted by accomplished artist Alanna Purdy, family friend and former babysitter for the Tow’s children.

The Withers Winery currently offers eight varieties of wines, including the Mr. Burgess El Dorado Syrah Blend. The price points range from $20-$48 and are available for shipping anywhere in the U.S. at thewithers.com. Andrew Tow has been happily “swallowed up” by the wine business and is currently planning to expand his offerings. From passing unmarked bottles around his own table to crafting nationally acclaimed elegant reds, whites, and Rosés, Andrew Tow proclaims, “I am having the time of my life.” Cheers!

noun, (used with a plural verb)

1. the highest part of the back at the base of the neck of a horse, cow, sheep, etc.

Battle of the Burgundy: What Coat Colors Belong In The Hunter...