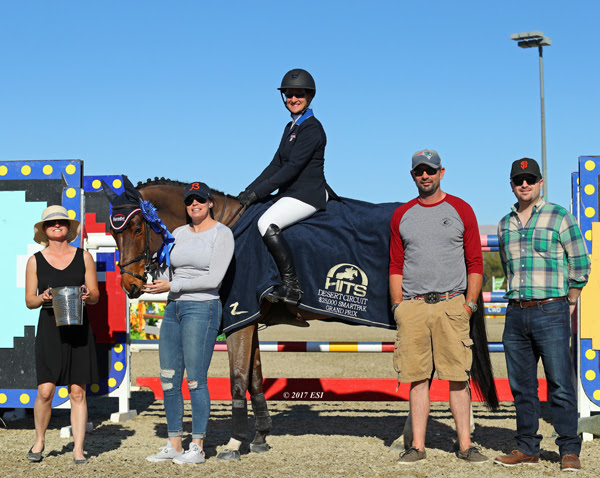 Thermal, CA (February 13, 2017): As Week IV of the HITS Coachella Desert Circuit came to a close, 34 riders and horses descended on the Grand Prix Ring at HITS Desert Horse Park for a change to close out the first half of the Desert Circuit with a bang.

The winner of the $25,000 SmartPak Grand Prix would prove to be Encinitas, California equestrian Mandy Porter riding Milano, owned by Abigail Weese. Porter won first and fourth place earlier in the week in the FEI HITS Desert Classic, and returned to close out the week on top.

The weather was perfect for an exciting finale to the week, with abundant sunshine in sunny Southern California, riders came to escape the rainy conditions in other parts of the state, and the weather did not disappoint. Course designer, Marina Azevedo of Sao Paulo, Brazil, set an exciting track that included a few different questions that riders and horses had to answer.

“It was a nice 1.45m track.Iit was what I was expecting for this class and I thought it was very fair,” said Porter post-win. “There were the double verticals across the middle with the line coming towards the gate, and quite a short line to end the course. It was a good course that allowed for a few different ridability techniques.”

Eleven would advance over the first-round course to move on to the jump-off. The shortened course utilized the entire ring and snaked from one end of arena to the other, ensuring a great view for all of the spectators.

First to contest the abbreviated course was Chenoa McElvain of Lemitar, New Mexico, riding Wallstreet RC, owned by Guy McElvain. They sped through the course and conquered each fence, stopping the timers fault-free in 35.99 to set the tone for the remaining field. The round would ultimately land them with the fifth-place prize.

Mandy Porter entered with Milano as the seventh pair in the jump-off order, and they put the pedal to the metal to put down the quickest round that would hold up for the remainder of the class— a clear trip in a lightning-fast 33.21.

“We’re taking it one day at a time with Milano,” said Porter. “He’s very talented but we are still learning more about him and what he is capable of at this level. He has certainly performed very well this week and we’re excited to see what’s to come.”

Next to go clear after Porter was Karl Cook of Woodside, California, riding Caillou 24, owned by Signe Ostby. Their time of 35.37 would be good enough for the eventual fourth-place ribbon.

Vani Khosla and her mount, Billy Mexico, were next to power through the course untamed and with no rails in sight. The seconds wound down as they soared through the final chapters of the course, a long gallop to a mid-ring oxer followed by a rollback turn to the final fence coming home to the crowd. They crossed the timers in 34.93 for the ultimate third place.

Chris Pratt entered second-to-last in the jump-off aboard Cruise, owned by Indigo Farms, LLC.  They were chasing Porter’s leading time and put in a valiant round. They crossed the finish in a cool, clear 33.90 for second-place.

A Plethora of Pony Fun at Blenheim June Classic 3