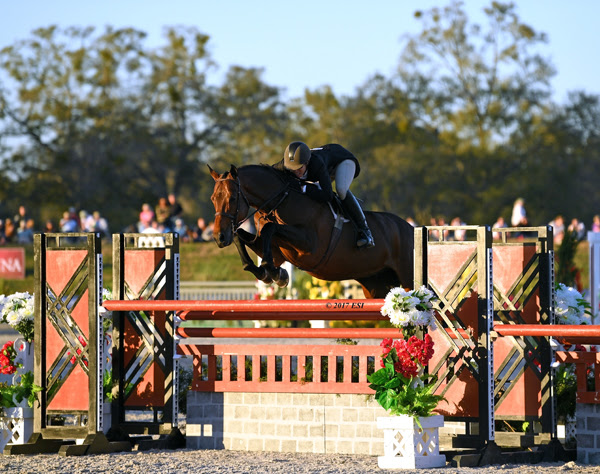 Ocala, FL (February 12, 2017): The first of two $50,000 USHJA International Hunter Derbies at HITS Post Time Farm commenced on Saturday during Week IV of the HITS Ocala Winter Circuit. As the sun set, and the lights in Ocala Horse Properties Stadium came to life, the crowd watched in anticipation to witness who could master the course with finesse and the highest caliber of precision.

Kristy Herrera and Miss Lucy, owned by Helen Lenahan, finished the first round on top with a score of 185.5, but a talented list of contenders ready to rally for blue still filled the second-round Order. They would ultimately settle for sixth place with a second round score of 169 for an overall total of 354.5.

Patricia Griffith entered second in the order with fifth-place ride, Charisma. Opting for all four height options and getting a handy bonus score of 15, they received the highest total of the second round to boost them up in the standings with a 190.5. Their first round score, 165, added to the mix gave them an overall total of 355.5.

Sixth in the order to return, Holloway and Any Given Sunday were meticulous in their pursuit of a win, coming back seventh after the first round, they opted for three height options and received a combined total of 13 Handy Bonus Points. It was quite the comeback, but not enough to garner the lead. A first-round score of 171.5 combined with a second-round score of 197 totaled 368.5 would give them the red ribbon.

Two trips later, Holloway would return with her second mount, The Governor. They earned a second-round score of 186.5, which combined with their first-round score of 173.5, gave them a total of 360 for the eventual fourth-place.

Griffith and Clearline Z entered the second round ninth in the order and in the current fourth place. They opted for all four height options and received 15 handy bonus points, giving them a high second-round total of 203. Combined with their first round total of 177, they topped the field for the eventual win with an overall total of 380.

Westminster, Maryland equestrian Samantha Schaefer was the final contestant of the eventual top five to return to the second round. She piloted In The Know, owned by Madeline Schaefer, to the second highest score of a 188.5, added to their first round total of 179 that gave them a 367.5 for the ultimate third-place prize.

The $50,000 USHJA International Hunter Derby will make several more visits to HITS this year including once more at the Ocala Winter Circuit during Week X, Coachella Desert Circuit in Week VIII, two at HITS Saugerties (Week IV & VI) and HITS Chicago (Week III & II). The extra opportunity for a prestigious hunter victory and top-level prize money has hunters in high pursuit of a Derby victory

Junior riders turned out for the $1,500 USHJA Pony Hunter Derby at HITS Post Time Farm in Ocala, Florida. The Pony Hunter Derby took place during Week IV of the Ocala Winter Circuit and exhibitors were chomping at the bit to compete.

The team to beat was Maddie Tosh of Milton, Georgia, and Flashback, owned by Madeline Schaefer. They finished the first round with a score of 84, earning a 76 in the second round for a total of 160.

Not only would Tosh win first place, but she would take home third place as well, taking the yellow ribbon with Cozy Up—their scores of 75 and 77 gave them a total of 152.

Second in the ribbons went to Avery Zwim, riding out of Tampa, Florida, piloting Rapunzel. The pair came in with a total score just one point behind Tosh’s winning score, a 159, combined by their scores of 78 and 81, respectively.

The final five would round out with Sophia Ayers of Reddick, Florida, who took home both fourth and fifth place prizes. Ayers piloted Prima Ballerina to fourth place with a first round score of 63, improving to an 84 in the second round for a total of 147.

Her fifth place ribbon with Bianca, came after being awarded a score of 80 in the first round and 60 in the second for a total of 146.