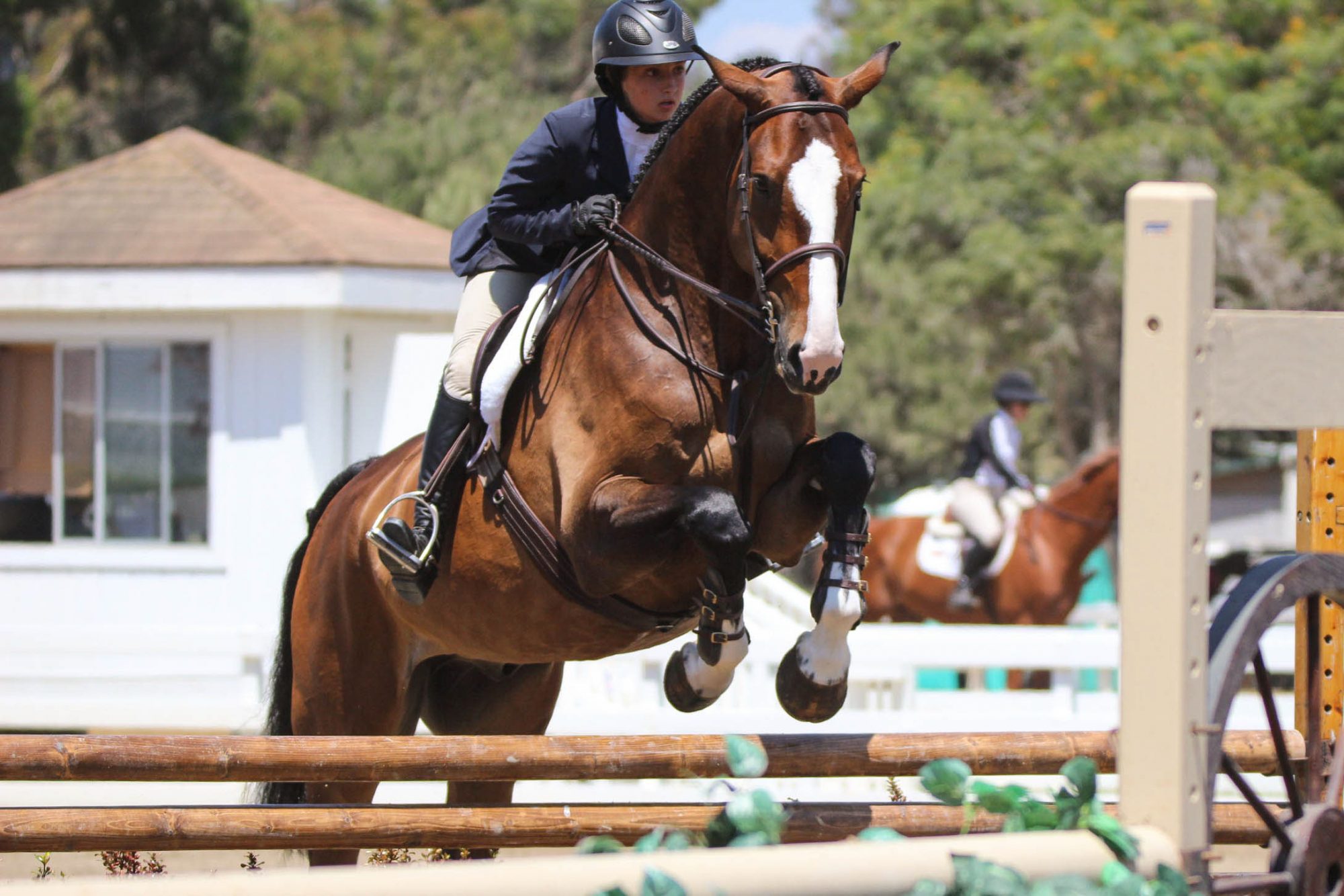 Above photo: High Eagel and Kinnison competing in the Equitation, Photo by Irene Powlick Photography

A hard worker and student of the sport, Katherine Kinnison is a young rider to emulate.  While climbing the ranks of the junior divisions on the West Coast, Kinnison learned from the very best, despite beginning her show career later than most riders.

Born in Salt Lake City, Utah, Kinnison began riding at Mary Lee Brighton’s Brighton Meadows, a farm in Holladay, Utah, that focused on teaching students to learn to ride on once-wild Mustangs. Not only did the experience of riding Mustangs teach Kinnison how to really ride, but the farm also focused on teaching young riders proper horsemanship. When she was twelve years old Kinnison bought her first pony, Acorn, a mare which she had leased since she was nine. Kinnison competed at her first horse shows on the Mustang, and it was quickly apparent that the young rider was going to be successful.

After two years of successful competition on the local circuits on Acorn and her new horse, Sultan, Kinnison was pushed out of her comfort zone. A clinic with Bernie Traurig opened up the idea to move to California to pursue riding, an idea that was influenced by her father’s diagnosis of ALS. Just over a year after his diagnosis, the Kinnisons moved to Encinitas, California, where Kinnison began training with Hanna Mauritzson and Bernie Traurig. Only one month after the move, Mats Kinnison passed away from the degenerative disease.

“If it weren’t for horses, I honestly probably wouldn’t be here,” said Kinnison. “I was so depressed after my dad passed, the horses really saved me.”

After her father’s death, Kinnison became consumed with horses like never before. High Eagel, an imported Swedish Warmblood, joined Sultan, and Kinnison began competing in the Big Equitation and the Modified Junior Jumpers, thereby learning about the upper levels of show jumping. “Bernie [Traurig] really focused on form directly relating to function,” Kinnison explained. “I learned so much about the mechanics of riding from him.”

After two years of competing Sultan on the A circuit, the older gelding was ready to leave his career on the circuit. “Sultan was the one who got me through the passing of my dad. He made riding so fun, even if he gave me a run for my money at times!” Kinnison explained. Not being able to bring herself to sell him, Kinnison made the decision to retire Sultan to the farm in Colorado where she originally found him and where he had lived for 13 years.

Shortly before retiring Sultan, Kinnison began training at Alicia Saxton’s Oceancrest Farms, where she went to focus on equitation. Later, when her desires were set on getting back in the jumper ring, she sold High Eagel, and acquired two new horses: Zillions Dos Fidalgos, who she purchased from Hap Hansen, and Viareggio, a gelding owned by Guillermo Obligado whom Kinnison leased. A few months after acquiring her new horses, the opportunity arose to begin riding with accomplished Egyptian rider, Nayel Nassar.

Kinnison had always been passionate, but being exposed to a horseman that truly focused on horses being healthy and happy enhanced her commitment.  Success followed Kinnison in   her move to Nassar. Winning numerous championships, along with finishing sixth in the NAL Junior/Amateur Finals and finishing fourth in the overall standings, she was also scouted out by Simon Nizri, with whom she worked  before joining Nassar at the Wellington Winter Equestrian Festival in January of this year.

Combining the natural horsemanship that she learned from working with Mustangs with the formal training of her coaches creates a dynamic combination of success and knowledge. Living by the words of Ronald Duncan, Kinnison sees the horse having “nobility without conceit, friendship without envy, beauty without vanity. A willing servant yet never a slave.”

The young and talented rider is not one to be caught up in the drama of the A circuit, nor would she likely be found anywhere but in the barn. “I’m just not much of a party kid!” exclaimed Kinnison. “I have a couple really good friends on the circuit and I think that I’m nice to everyone, but I’d rather go home and spend time with my mother or work on school than go out.”

Kinnison has a laser-like focus that keeps her grounded and when many of her age may be celebrating their wins, she is more likely to be found with her equine companions. Her automatic release, softness on the horse’s mouth and back, and great understanding of how to get the horse to work best through positive reinforcement are hallmarks of Kinnison’s riding and will carry her to success in the future.

An Aging Equestrian’s Journey Back To Horses After Injury