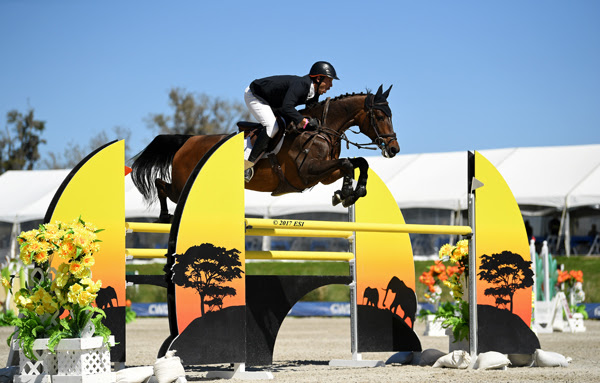 Ocala, FL (February 27, 2017): The grand finale of another FEI week at HITS Post Time Farm ensued on Sunday beneath a beautiful, sunny sky. Forty-three competitors turned out for a shot at the top title, including seasoned Grand Prix vets and a new blend of young, talented equestrians.

After two Grand Prix wins and several top ribbon placings in the Ocala Horse Properties Stadium during the Ocala Winter Circuit, Andy Kocher of Lake St. Louis, Missouri, returned to the iconic stadium to once again snag a win, this time in the $50,000 KindredBio Grand Prix.

Kocher piloted Ciana, owned by Eagle Valley Partners, LLC, to the win in a nine-horse jump-off over the course designed by Manuel Esparza of Mexico. Five would produce clear rounds over the abbreviated course in contingency for the win.

Most of the top five would go back-to-back in the jump-off setting the top scores within the first half of the jump-off, aside from one speedy round as the second-to-last challenger.

McCrea and Special Lux crossed the timers with all of the rails up in 36.32, which would ultimately give them the second-place prize.

Immediately following McCrea in the order were victors Kocher and Ciana. They took to the course no holds barred, chasing McCrea’s time and determined to put in a quicker clean effort. They did just that, stopping the clock in a blazing-fast 35.31, where the lead would remain.

Next in was Andrea Torres Guerreiro, a fiery, Columbian-equestrian with several top finishes in HITS Ocala’s featured Grand Prix. Guerreiro proved herself a force to be reckoned with, powering through the course aboard her horse, Fifty Shades. They passed the timers in 37.44, a few seconds shy of the lead, but a round that would hold up for the rest of the class to ultimately give them fifth place.

Devin Ryan and Eddie Blue, owned by LL Show Jumpers, LLC, won last week’s $5,000 FEI Welcome Stake during the CSIO4* Nations Cup week at HITS Ocala. This week they scored a fourth-place prize in the $25,000 SmartPak FEI Grand Prix, and returned to once again claim fourth place in Sunday’s Grand Prix. Ryan and Eddie Blue stopped the clock in 36.88 with no faults for the white ribbon.

Another clear round would not be seen until the second-to-last horse in the order, Conthendrix owned and ridden by Andre Thieme of Germany. Thieme and his mount laid down a valiant effort to catch Kocher’s leading time, leaving all of the rails up. Their time of 36.54 moved them ahead of Ryan and Torres-Guerreiro and into the third place slot.