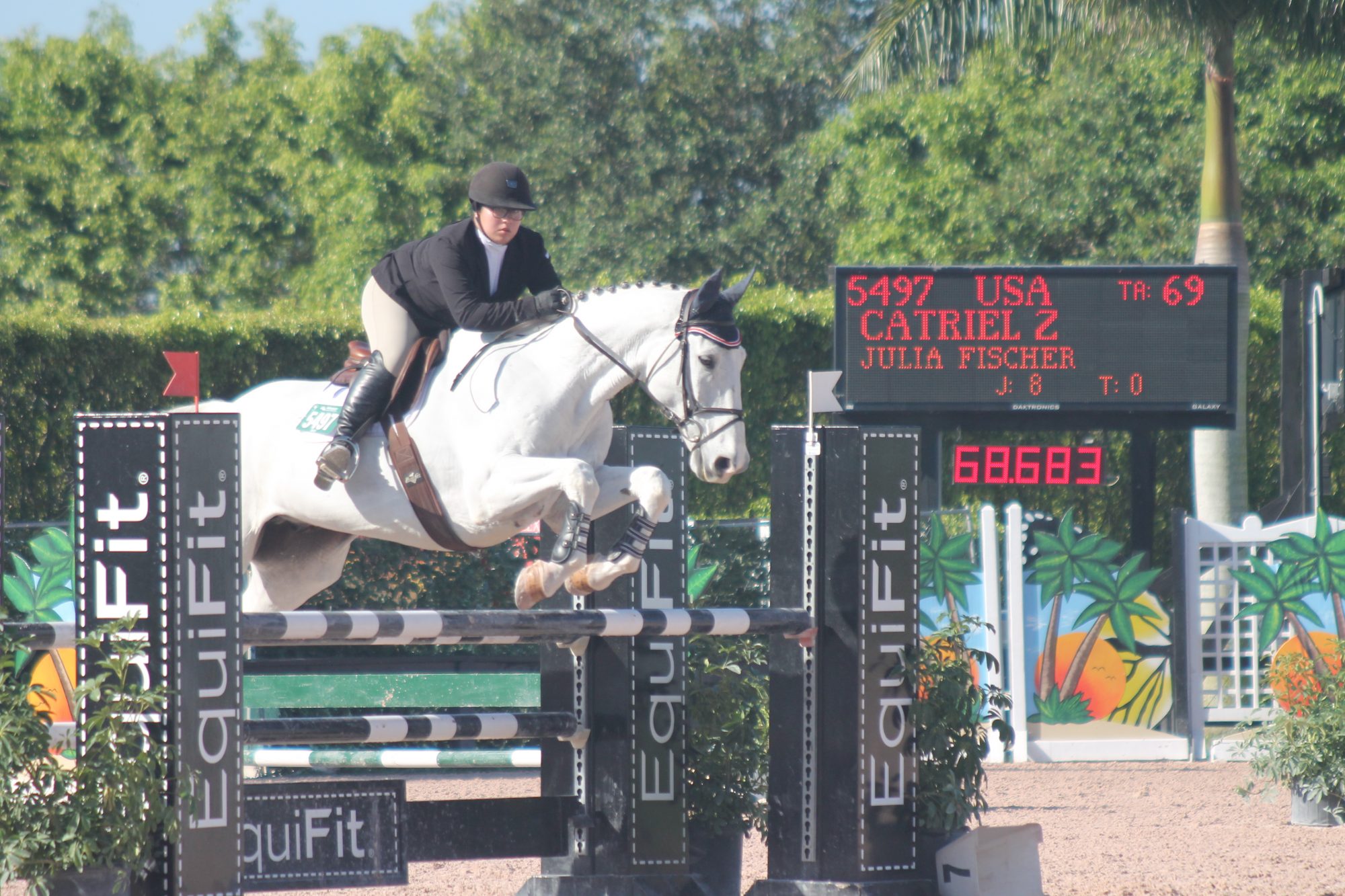 On a winter morning at the Winter Equestrian Festival in Wellington, FL, several horses were escorted through the bridle path near a local road, an ordinary day for them. The horses were groomed perfectly, wearing only the top brands of the sport, and taken from the most elite barns in the country to the show grounds at The Palm Beach International Equestrian Center. While the show had already been running for six weeks and many riders and horses were already accustomed to the drill, I was star struck and lost as I arrived at the event during Week 7. I am a rider who had grown up in the usual horsemanship camps and begged to be entered in local schooling shows in my home state of Colorado. Having slowly but surely advanced in my riding show career, I currently compete on the A/AA show circuit. I was now at one of the most prestigious horse shows, ready to show my leased horse, Catriel Z, or “Z”. My trainer, Courtney Frederick, was able to find me an accomplished jumper who had previously competed in Grand Prix’s, and was ready to be my partner in the Children’s Jumpers. Entering the show grounds, I had my eyes pinned to the view outside of the car. Horses passing on either side of the road, some incredibly stunning barns on my right, and the bridle path filled with beautiful horses being led to the show grounds on my left. I wanted to stop and to watch everyone pass. Yet, walking on to the show grounds was even more impressive. Many equestrians like me spend lots of time watching the show through the eyes of top professional, junior, and amateur riders on social media. But who would actually expect to see every rider on the show grounds look so pristine, as if they were all ready to snap a picture to put up on their Snapchat story? I certainly did not. Passing by barns decked in sponsors or top rider names was quite intimidating, especially since the show had already been running for six weeks and many banners of the barns were covered in top placing ribbons. It was as if I were walking through my current Instagram feed, seeing all the pictures come to life, not to mention the warm-up and show arenas filled with competitors from across the world. It was quite easy for a rider like me to be awestruck simply walking from ring to ring. Spending the majority of my first couple days in the Lounge placed close to Vendor Village and at the International Ring, I was able to learn from some of the top riders just by watching. I truly felt inspired after watching the International Ring riders for the first two days and was motivated to do well in my classes. Competing in my first class at WEF, my trainer placed my horse and me in a 1.10 class. Coming back to the hotel that evening with a blue ribbon was an added bonus. Having never shown in Florida, or on the horse I was leasing, I wore a smile the rest of my day. Continuing my show week in the Children’s Jumpers, I still remained nervous. Falling off in the schooling arena before my first class on Saturday was no help either! I walked into my first class and forgot my course part way through after making a wrong turn, but eventually found my way back on course. We decided that I would do a second jumper class and Catriel Z took me around an amazing course and boosted my confidence. With one more class to go on Sunday, my Classic, I felt ready and prepared. Both my trainer and horse gave me the heart I needed for the challenging class. My NAL/WIHS Children’s Jumper Classic was by far the best round I had all week. Even though I came out of the arena with four faults from my initial round, I could not have been happier. We made clear improvements throughout the week, and we were able to finish my first week at WEF on a high note. Even though my Children’s Jumper classes were never clean, I could not be happier with how my rounds finished. In addition to competing during week 7 of WEF, I was able to watch the $380,000 Suncast Grand Prix, in which the top three riders in the world were competing against each other. But, rather than finding a seat next to the giant International Ring, (yes the arena is giant, even more so than you would think) my trainer and family headed to a much better viewing area: the warm-up arena. It was fascinating to watch how the top riders prepare their horses for such a large and competitive class, and to listen to them. Listening to Lauren Hough talk to Eric Lamaze after his speedy jump off, Cian O’Connor discuss the course with others, as well as McLain Ward’s somewhat constant conversations in the first couple minutes of warming up, was an amazing opportunity to study the greats.  Finding the top riders in the world being friendly towards each other was quite uplifting, as well as their sportsmanship.

Although my time spent in Florida was short due to school, I am elated to have spent a fantastic week at the Winter Equestrian Festival. Being surrounded by some of the top riders in the world has sparked a new fire in me to become better. It has reminded me that we do not always receive ribbons in our classes, but we may learn instead. I know that line is a bit cliché in the world of riding horses, but I feel it fits in perfectly with my experience at WEF.  Winning a ribbon is not always the best value in a class. I found that watching how riders execute turns and courses helps one become a better rider. It influences one to go home and be better- make the tighter turns, create more difficult courses, and execute them correctly. The top riders are the best for a reason. They can perform what is asked, exactly how it is presented. The opportunity to watch that in person makes me want to strive for better. Maybe I won’t have a clean round or ribbon at my next show either. But, I do hope to be a better rider than yesterday, so I may continue improving and, hopefully, someday become one of America’s top riders.

Want to contribute to The Plaid Horse?

We want you, too! Whether you are an aspiring photographer, journalist, short story writer, product reviewer, graphic designer, veterinarian, horse trainer…you name it! We would love to hear from you, and help you thrive in the horse show community. E-mail info@theplaidhorse.com today!

20 Motivational Quotes to Use at the Barn