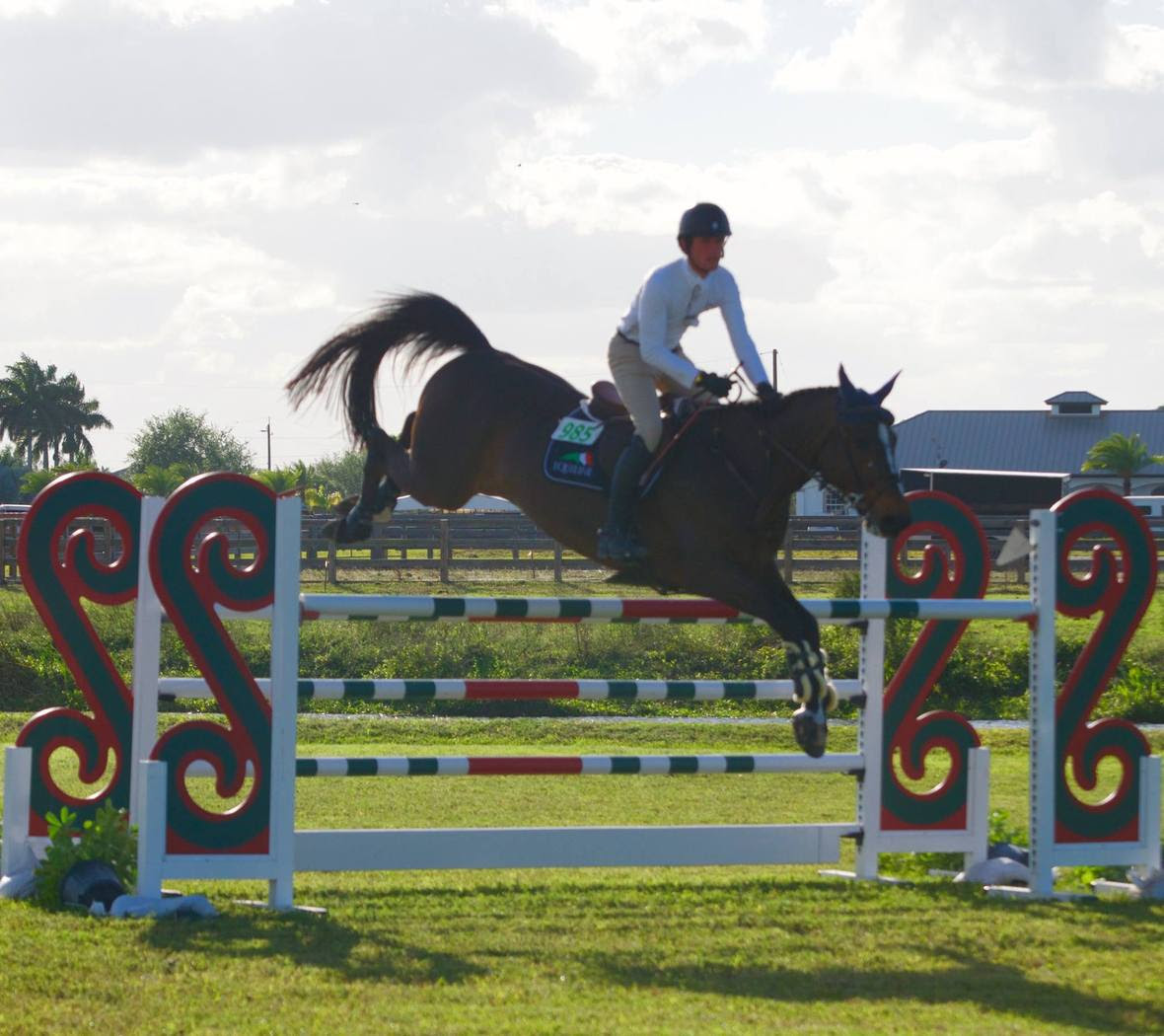 Wellington, Florida (March 11, 2017) – Ireland’s Darragh Kenny and Canada’s Kevin Crosby leapt to victory during the ninth week of competition at The Ridge Palm Beach Series, where five days of competition over varied surfaces and venues continued The Ridge’s tradition of elite horse shows in a welcoming, relaxed atmosphere. From leadline and Pony Jumpers to the Grand Prix with top ranked FEI competitors, the Palm Beach Series offers a unique show experience designed to act as a catalyst for developing horses and riders.

Darragh Kenny and Diamond D Shine in $15,000 1.40m Turf Tour Grand Prix at The Ridge at Wellington
Crossing the utopian flair of old world horse shows with the competition and excitement of modern showjumping, The Ridge at Wellington’s grass jumping field welcomed a cross section of riders for its 1.30m division and $15,000 Turf Tour 1.40m Grand Prix on Saturday, March 4th. Low, Medium, and High Schooling Jumpers worked in tandem with the main ring’s flow of competitors, which included some of the top names in the sport.

The USA’s Kent Farrington, who as of late February 2017 is #2 in the Longines FEI World Rankings, brought a group of young, up and coming horses to the Turf Tour, and quickly set the standard with the elegant Baltic Star 2. Despite a casual ride, the pair topped the class early with a jump-off time of 49.972.

“He’s a new horse for me, and a bit green but he shows terrific potential,” said Farrington of the 8-year-old Baltic Star 2. “Today we were just cruising around, its great to bring the horses someplace new and he showed a lot of bravery on the grass. I like the atmosphere for young horses [at The Ridge] and its a less expensive, less hectic alternative to bring highly strung or green horses and to ride in a low key environment.”

Farrington’s laid back round with Baltic Star wouldn’t last as the rest of the class took the field. Week 8’s Turf Tour champions, Taylor Land and Nepal, made easy work of the Chris Jones course putting in a double clear effort to finish on 44.630 seconds. Land, who rides her family’s veteran Grand Prix horse Nepal under the guidance of her father, Jay Land, refers to the gelding as a family heirloom.

“Nepal loves grass and jumped very well today,” said Land. “It was a big, long course and I think I was a slightly more conservative just because of how he felt today. The Ridge is a great break for both me and the horses and jumping on grass is such a nice change, especially for Nepal as he prefers it to sand.”

An impressive effort by Canada’s Kevin Crosby and Casino put them into third behind Land and Nepal. The relatively new partnership took to the grass, and Crosby chose the Turf Tour and Palm Beach Series’ laid back atmospheres to show a number of horses in the past few weeks. “I’ve been riding Casino for about a month and half, and this was a great experience for both of us for a change of scenery,” said Crosby. “He’s an experienced horse but seemed to enjoy jumping on the grass. I’ve become more and more familiar with The Ridge and its organizers, and they do a great job creating a relaxing environment and providing an opportunity to develop horses.”

With Land and Nepal leading, Emmanuel Andrade and Gaverdi Z edged out Crosby and Casino for third, and Ireland’s Darragh Kenny ultimately claimed the top prize with Diamond D, with a late in the day effort finishing on 42.984 to win the class. The decorated Irish rider brought a number of horses to capitalize on the pristine turf course.

“He [Diamond D] is a new horse for me, he arrived last week and I was impressed with him today,” said Kenny of the 10-year-old gelding. “We jumped Wednesday and Thursday in the 1.30 divisions [on the Palm Beach Series] at Jim Brandon, and he felt really good and jumped brilliant today on the grass. I really like the show and the concept especially for horses getting going again. It’s not a huge pressure situation for them and a nice, different environment especially for younger horses that are being developed for the bigger, more intense classes. It’s also a nice change to show on the grass. Their [the organizers’] idea is super and its a great concept for the horses and riders.”

The Turf Tour continues March 17 at Carben Farms and March 24 at Wolfstone Stables with Low, Medium and High Jumpers, 1.30m division and the $15,000 1.40m Grand Prix, and concludes April 1st at Polo West.

For full schedules, prize lists, and entry blanks for all of the Palm Beach Series events, visit www.TheRidgeFarm.com.

Friday, March 3rd saw the main jumping ring at Jim Brandon set for the a $5,000 1.30m Open Stake, as wellas the full jumper divisions that run Wednesday through Sunday.Combining a dynamic course, exceptional footing, and a generous purse for the division, the Open Stake lured a number of top riders to vie for its prize before the Turf Tour. A few of the Turf Tour’s top riders took advantage of the opportunity to tune up their rides for the bigger classes, including Saturday’s winners, Darragh Kenny and Diamond D.

In only his second outing on the gelding, Kevin Crosby captured the win aboard Stanley Stone, with a precise and fast double clear effort. Finishing on a jump off time of 40.408 seconds, Crosby’s prime goal was to develop their partnership but finishing at the top of a money class was a nice bonus.

“I chose the class as a tune up for Stanley Stone, to get to know him better and develop our camaraderie in the ring,” said Crosby. “It’s fantastic to be able to win a little money as it wasn’t really the goal as he’s a new horse for me. The facility [at Jim Brandon Equestrian Center] is a great change of scenery and a great show experience. I enjoyed being able to jump on different footing and have the options of challenging the horses, getting used to a new horse, or bringing a young horse for the experience.”

Andres Soto and Lorenza set an early pace in the class with a quick jump-off time of 44.900. Darragh Kenny and Diamond D swept the course to challenge Soto with a double clear effort, but slipped into second on 44.457. Within a few rounds Kenny had been edged out for second by Andrew Welles and Serpico. Crosby’s effort with Stanley nearly wrapped up the class, as he topped the leaderboard with his 40.408.

The 2017 Palm Beach Series
The 2017 Palm Beach Series includes 13-weeks of hunter, jumper, dressage, and equitation competition, including a diverse offering of divisions and classes, National and International USHJA Hunter Derbies, a weekly 1.40-1.45M Grand Prix and $5,000 1.30m Open Stake, USEF Equitation Tuesdays hosted at The Ridge at Wellington, and the exceptional venues and all natural surfaces on the Turf Tour. With the series’ main grounds at the Jim Brandon Equestrian Center, just two miles from Wellington’s center, the Palm Beach Series also offers stabling packages which include a covered arena, multiple all weather arenas, permanent barns, and a variety of amenities for horses and riders.

The Ridge Farm
The Ridge, which is based out of New Jersey in the summer and Wellington in the winter, hosts a unique and diverse show circuit owned and organized US Olympic showjumper Nona Garson and George D’ Ambrosio. With a resume that includes the 1998 World Championships and 2000 Olympic games, wins at the Nations Cup Finals at Spruce Meadows, and multiple leading lady rider titles at Aachen, Royan, Gijon, and Helsinki, Garson founded The Ridge as an elite hunter, jumper, and equitation paradise for riders of all levels. Her hands on experience at the top international levels and effective teaching style make her a sought after clinician and coach. Along with a team of industry experts, she launched The Ridge’s show circuits, which include the Spring Series, Summer Spectacular, Asbury Classics, and Palm Beach Series, as well as a number of schooling shows. In their design, the shows were meant to provide a haven to nurture young horses and developing riders on an elite circuit with world-class amenities paired with a laid back, relaxed atmosphere.

Follow Nona Garson/The Ridge Farm, The Ridge at Wellington on Facebook, and the Palm Beach Series on Instagram (@palmbeachseries for up to the minute news and info!