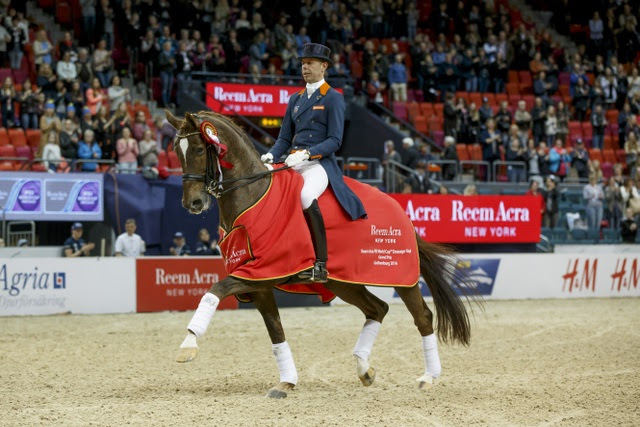 Omaha, Nebraska – March 16, 2017 – A stellar lineup of the world’s elite dressage riders and horses have qualified for and indicated their intention to compete in the 2017 FEI World Cup™ Dressage Final in Omaha, Nebraska. An impressive field of 18 of the world’s top dressage athletes, including Olympic, World Cup, European and World Champions, will vie for the championship title when the Final is held concurrently with the Longines FEI World Cup™ Jumping Final Omaha 2017 at the CenturyLink Center, March 29 – April 2.

Lisa Roskens, Chairman of the Omaha Equestrian Foundation, which is producing the Finals, commented, “Now that the qualifiers around the globe have ended and we know who is coming to Omaha to compete in the Finals, the excitement is reaching a fever-pitch! The Finals are less than two weeks away and it’s still not too late to get a ticket – come join us to see the best dressage athletes in the world and watch history in the making!”

The FEI has four World Cup™ Leagues in dressage – the North American League (NAL), the Western European League (WEL), the Central European League (CEL), and the Pacific League (Australia and New Zealand) (PAL). With just 18 horse/rider combinations qualifying for the Finals, spectators are guaranteed to see the best the sport has to offer.

Those who have qualified and indicated their intention to compete include:

Reigning FEI World Cup™ Dressage Champion, Hans-Peter Minderhoud of The Netherlands, is a two-time Olympian with a Team Silver medal. He will be defending his 2016 title with Glock’s Flirt, a 16 year-old Swiss Warmblood gelding. The pair have been very competitive in this season’s qualifiers, winning in ‘s-Hertogenbosch, taking second place in London (England), and fifth in Amsterdam.

Top U.S. rider Laura Graves will be competing on her Olympic mount, Verdades. Ranked fourth in the world, the pair topped the NAL after winning two qualifiers in Wellington, Florida. Graves was the highest-placed American rider at the 2016 Rio Olympic Games where she finished fourth individually and secured the Team Bronze medal for the U.S. The pair competed at the 2014 FEI World Equestrian Games™ (WEG) and took fourth at the 2015 FEI World Cup™ Finals in Las Vegas before winning Team Gold and Individual Silver medals at the 2015 Pan American Games.

Graves’s U.S. Olympic teammate Kasey Perry-Glass, ranked second in the NAL, will compete her Olympic horse Goerklintgaards Dublet. The pair were also part of the U.S.’s Bronze-medal team at the 2016 Rio Olympics. Last year Perry-Glass and Dublet were members of the U.S. Team that won the gold medal in the FEI Nations Cup competition in in Compiegne, France, and the Silver medal at the FEI Nations Cup in Rotterdam, The Netherlands. They earned their spot in Omaha after taking first and second places at two qualifiers held this season in Wellington, and they recently topped the elusive 80% score in a Grand Prix Freestyle in Wellington.

Joining Graves and Perry-Glass in the Final will be four-time U.S. Olympic veteran Steffen Peters, their 2016 Bronze-medal Olympic teammate. Peters won the 2009 FEI World Cup Finals in Las Vegas, and has competed in three World Championships, winning a Team Bronze medal. He also won Individual and Team Gold medals at both the 2011 and 2015 Pan American Games. Ranked ninth in the world and third in the NAL, Peters will compete Rosamunde, a 10-year-old Rhinelander mare.

Germany’s Jessica von Bredow-Werndl will be competing on either Unee BB, a 16-year-old Dutch Warmblood stallion, the horse on whom she won a Team Bronze medal at the 2015 FEI European Championships, or another top mount, Zaire-E, a 13-year-old Dutch Warmblood mare. Together, Bredow-Werndl and Unee BB have competed at three FEI World Cup™ Finals, taking third place at the 2015 Las Vegas Final and the 2016 Gothenburg Final. Ranked second in the WEL, the pair took third place at the qualifiers held at Salzburg, Gothenburg and ‘s-Hertogenbosch as well as fourth place in Lyon.Two-time FEI World Cup™ champion Isabell Werth of Germany, the most decorated dressage rider in Olympic history with a total of 10 medals, is seeking her third World Cup championship title in Omaha. Currently ranked number one in the world, she also topped the WEL after winning qualifiers in Lyon, Stuttgart, Amsterdam, Neumunster, and Gothenburg.  Werth will be riding either her 2016 Olympic mount, Weihegold OLD, a 12-year-old Oldenburg mare, or Emilio 107, an 11-year-old Westphalian gelding with whom she has had great success. Werth is also headlining The Dressage Showcase on Friday afternoon in Omaha, an educational event titled “Young Horses to Grand Prix with Olympic Champion Isabell Werth Presented by the Dressage Foundation.”

Ireland’s Judy Reynolds made history last year by becoming the first Irish rider ever to qualify for a Dressage World Cup™ Final. She and Vancouver K competed at the 2016 Finals in Gothenburg, finishing in 8th place and went on to compete at the 2016 Rio Olympics. Ranked third in the WEL, Reynolds and Vancouver K, a 15-year-old Dutch Warmblood gelding, won the qualifier at Devon (USA) last fall, placed seventh at Stuttgart, fourth at London Olympia where Reynolds earned a personal best score, and sixth at ‘s-Hertogenbosch.

Four-time Olympic veteran Kristy Oatley of Australia, ranked fourth in the WEL, will be competing her top horse Du Soleil, a 13-year-old Hanoverian gelding. The pair won the qualifier in Zakrzow, placed fourth in Odense, and took sixth place at both the Salzburg and Neumunster qualifiers. Oatley has also competed at three FEI World Equestrian Games™ and two FEI World Cup™ Finals (2001, 2004).

Great Britain’s Carl Hester, a five-time Olympian with Gold and Silver medals to his credit, will be competing Nip Tuck, a 13-year-old Dutch Warmblood gelding, the horse with whom he won a Team Silver medal at the 2016 Rio Olympic Games. The pair won the qualifier on home turf at the London Olympia Horse Show and took second place at both the Lyon and Amsterdam qualifiers. They also won Team Silver medals at the 2014 WEG and 2015 FEI European Championships. Hester is ranked fifth in the world and fifth in the WEL.

Marcela Krinke Susmelj of Switzerland, a 2016 Rio Olympian, has competed at three FEI World Cup™ Finals, finishing 10th at the 2016 Gothenburg Final. She is also a three-time WEG and five-time FEI European Championship veteran. Ranked sixth in the WEL, Susmelj won the Lipica qualifier and placed in the top-ten at Lyon, Stuttgart, and Neumunster. She will be riding her Olympic horse Smeyers Molberg, a 16-year-old Danish Warmblood gelding.

Ranked seventh on the WEL, Madeleine Witte-Vrees of The Netherlands will be competing her top horse Cennin, a 10-year-old Dutch Warmblood gelding. The pair took third place at the Neumunster qualifier, fourth in Stuttgart, fifth in Salzburg, and seventh in Amsterdam, earning them their first-ever FEI World Cup™ Final appearance.

Olympic Bronze medalist Edward Gal of The Netherlands, a two-time Olympian and the 2010 FEI World Cup™ Champion, will be riding Glock’s Voice, a 15-year-old Dutch Warmblood stallion. Their start in Omaha will mark Gal’s 10th World Cup Final appearance. He has competed at three World Championships, winning two Individual Gold medals, along with Team Gold, Silver and Bronze medals. He was also crowned European Champion in 2009. Ranked eighth in the WEL, he and Glock’s Voice earned top qualifier placings at London Olympia, Amsterdam, and ‘s-Hertogenbosch.

Denmark’s Mai Tofte Olesen will be competing in her first-ever World Cup Final aboard Rustique, a 15-year-old Danish Warmblood gelding. Ranked ninth in the WEL, the pair have five qualifier placings in their first year of World Cup competition together including Augustowek, Odense, London Olympia, Amsterdam, and Gothenburg.

Russia’s Inessa Merkulova, leader of the CEL, will be competing her 2016 Olympic mount Mister X, a 13-year-old Trakehner gelding. The duo are Olympic, WEG and European Championship veterans. They claimed four victories at World Cup™ qualifiers this year including Minsk, Nizhniy, and two in Moscow. This will be their fourth FEI World Cup™ Final together.

Hanna Karasiova of Belarus, second in the CEL, will be competing Arlekino, a 11-year-old Latvian Warmblood gelding. The pair won three World Cup™ qualifiers this season, including two at Ruila in Estonia, and one in Moscow. They also took second place at Nizhniy.

Wendy Williamson of New Zealand has made history as the first dressage rider from New Zealand ever to earn a spot at a FEI World Cup™ Final. Ranked number one in the PAL, she will be competing Dejavu MH, a 12-year-old Hanoverian gelding, whom she just started competing on the international circuit in 2016. The pair won two qualifiers, including the World Cup™ Pacific/Asia League Final where she earned a personal best score and her spot in Omaha.

Another rider making World Cup history is Maria Florencia Manfredi of Argentina. She is the first Argentine rider to earn a starting place at a Dressage World Cup™ Final and she will be competing her own Bandurria Kacero, an 11-year-old Argentine gelding. A three-time Pan American Games competitor, Manfredi and Bandurria Kacero won a Team Silver medal at the 2014 South American Games in Quillota, Chile. The pair earned a starting spot after earning three good results at qualifiers held in Wellington.

At just 21 year-old, Brazil’s Joao Victor Marcari Oliva will be the youngest rider competing at the Finals. He will be riding his 2016 Rio Olympic mount Xama Dos Pinhais, a 14-year-old Lusitano stallion. The pair won Individual and Team Gold medals at the 2014 South American Games as well as a Team Bronze medal at the 2015 Pan Am Games. They earned their spot in Omaha after placing at both the Neumunster and ‘s-Hertogenbosch qualifiers.

A range of ticket packages are still available for the Finals in Omaha! Single-Session tickets for either Jumping or Dressage range from $45 – $85 depending on the session and location. All-Session ticket packages include seats for five events in either jumping or dressage. The best seats in the house are the VIP Tickets in the first 5 rows which include access to the VIP Hospitality Lounge throughout the event! The VIP Hospitality Lounge will feature full meals, open bar, live music, concierge service and other amenities, all included with each VIP ticket.

For more information about the FEI World Cup™ Finals Omaha 2017 and to purchase tickets, please go to www.OmahaWorldCup2017.com, charge by phone at 402-930-3079 or at the CenturyLink Center Omaha box office.