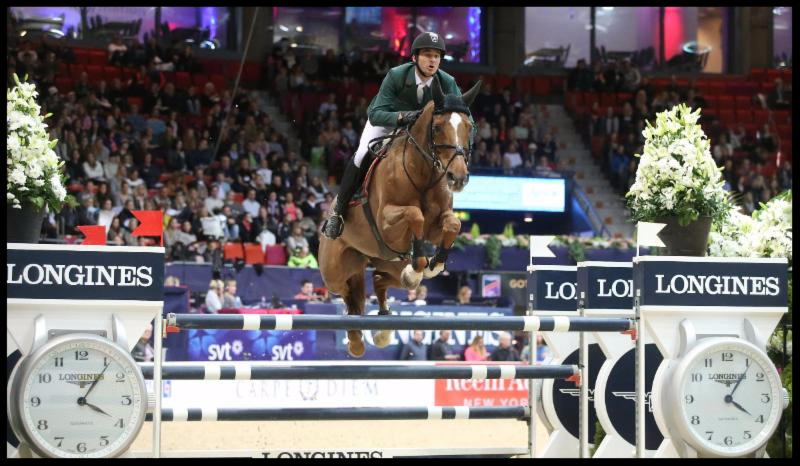 Switzerland’s Steve Guerdat Seeking to “Three-Peat”
Omaha, Nebraska – March 20, 2017 – An impressive lineup of the world’s best show jumping riders and horses is set to compete in the 2017 Longines FEI World Cup™ Final in Omaha, Nebraska. A total of 38 of the world’s best show jumping stars, including Olympic, World Cup, European and World Champions, have qualified and indicated their intention to compete for the championship title at the CenturyLink Center Omaha, March 29 – April 2. The Final is being held concurrently with the FEI World Cup™ Dressage Final Omaha 2017.

“There is no question that this will be the most exciting equestrian event of the year,” said Lisa Roskens, Chairman of the Omaha Equestrian Foundation, which is producing the Finals. “The Finals offer an opportunity to see the sport’s best horses and riders and we encourage everyone to get their tickets now and join us for this history-making event!”
Some of the sport’s biggest names headline a star-studded line-up coming to Omaha from Europe. Among them are two-time Olympic veteran Kevin Staut, who was part of France’s gold medal team at the 2016 Rio Olympics. Staut topped the Western European League rankings. He is currently ranked sixth in the world.
Heading the list of entries is two-time defending World Cup champion, Steve Guerdat of Switzerland.  Guerdat, individual Gold Medalist at the 2012 London Olympic Games, is seeking to tie the record of Rodrigo Pessoa of Brazil with his third consecutive title.

A strong U.S. contingent is headed by Olympic gold medalists Laura Kraut and McLain Ward.  Kraut, who will be competing on Zeremonie, took second place against top fields at qualifiers at both the Washington International Horse Show and Palm Beach Masters.  Ward, a two-time U.S. Olympic Team gold medalist who is ranked fourth in the world, is set to compete in his 17th FEI World Cup Final aboard his 2016 Rio Olympic mount HH Azur. He has placed as high as second in the World Cup Finals (2009).

Joining Kraut and Ward out of the North American League – USA East are Todd Minikus,who will be riding in his 6th FEI World Cup Final aboard Babalou 41 after winning the $100,000 Longines FEI World Cup Qualifier at the Live Oak International in Ocala, FL; Audrey Coulter, aboard Alex, whom she rode at the FEI World Cup™ Final in Gothenburg, Sweden in 2016; Charlie Jacobs, whowill be riding in his third World Cup Final, competing on Calenta or Cassinja S; and Christian Heineking of Germany who returns to the scene of some of his greatest accomplishments, having been Grand Prix champion at International Omaha four times in the last five years.

In the North American League – USA West, Karl Cook was the top-ranked U.S. rider after winning the qualifier at Thunderbird Park in Canada and finishing fifth at Del Mar. He will be riding in his third FEI World Cup Final on Tembla.  He is joined by Jenni McAllister who is competing in her second Finalon Legis Touch the Sun or Legis Venice and Jamie Barge who will be making her first appearance in the Final on Luebbo. Also qualified out of this League are Egypt’s Nayel Nassar, a two-time FEI World Cup™ final competitor, who won the qualifier at the Palm Beach Masters along with three top-ten placings in qualifiers at Las Vegas, Del Mar, and the American Gold Cup; and three-time Olympic veteran and 1990 World Show Jumping Champion Eric Navet of France.

Also on their way to Omaha are German veteransLudger Beerbaum and Marcus Ehning. Beerbaum, a seven-time Olympian with one individual and three team gold medals, will be competing in his 21st World Cup Final. He won the Final in 1993 and has seven other top 5 finishes to his credit. Ehning, one of only three riders (along with Rodrigo Pessoa and Meredith Michaels-Beerbaum) to have won the Final three times (2003, 2006, 2010), is an Olympic and World Equestrian Games team gold medalist and is competing in the World Cup Final for the 17th consecutive year!

Others who qualified out of the Western European League include 2012 Olympic team Gold Medalist Scott Brash of Great Britain who placed third in the 2014 FEI World Cup Final in Lyon, France; Italy’s Lorenzo de Luca who earned several top-ten placings with different horses and will be competing aboard Limestone Grey; Denis Lynch of Ireland who earned the majority of his qualifications aboard his top horse All Star 5; Sweden’s Henrik von Eckermann; Guido Jun. Klatte and Markus Brinkmann of Germany; Belgium’s Gregory Wathelet and Nicola Philippaerts; Leopold van Asten and Maikel van der Vleuten of The Netherlands; France’s Simon Delestre and Olivier Robert; Romain Duguet and Martin Fuchs of Switzerland; Max Kϋher of Austria; and Sergio Alvarez Moya of Spain.

Coming from the Central European League Northern Sub-league are Dawid Kubiak of Poland, Gábor Szabó Jr. of Hungary, and Rein Pill of Estonia.

Canada will be represented by Christopher Surbey, making his first World Cup appearance aboard Chalacorada, and Keean White who will be making his second appearance in the Final aboard For Freedom Z.

2016 Rio Olympian Sheikh Ali Al Thani of Qatar will be competing in his fourth FEI World Cup Final and Martin Rodriquez Vanni of Uruguayrounds out the field.

A range of ticket packages are still available for the Finals in Omaha! Single-Session tickets for either Jumping or Dressage range from $45 – $85 depending on the session and location. All-Session ticket packages include seats for five events in either jumping or dressage. The best seats in the house are the VIP Tickets in the first 5 rows which include access to the VIP Hospitality Lounge throughout the event! The VIP Hospitality Lounge will feature full meals, open bar, live music, concierge service and other amenities, all included with each VIP ticket.