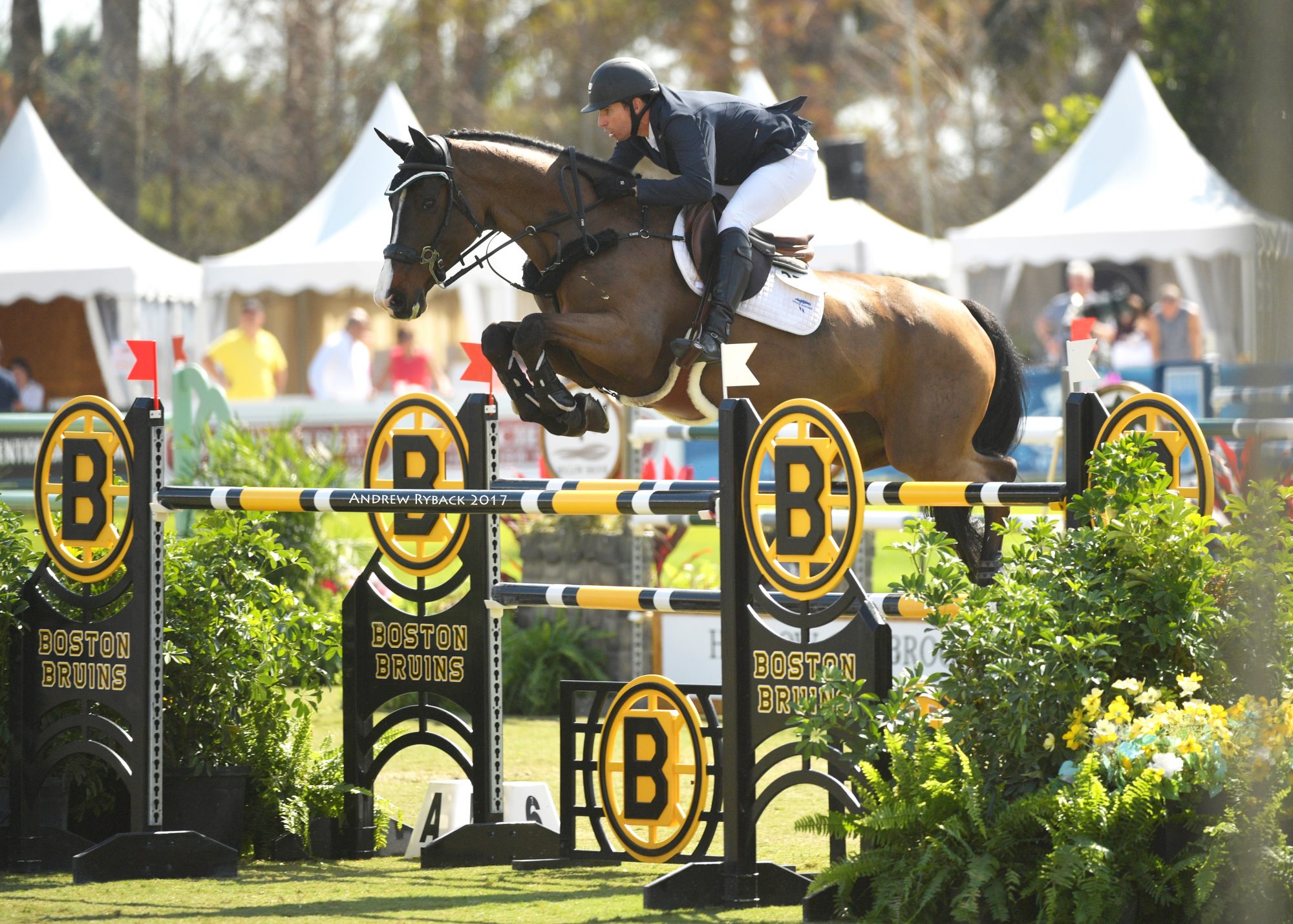 Young Canadian Rider Chris Surbey has a cut a swathe of success through Wellington, FL during this 2017 show circuit. As one of the top riders for The Southern Family and Spruce Meadows’ talented and extensive string of show jumpers, Surbey has consistently placed well against top riders this winter. Most recently, he rode Linda Southern-Heathcott’s Chalacorada to a ninth place finish in Longine’s FEI World Cup Jumping Wellington. While not yet a household name in the United States, he is a rising star in Canada.

Surbey, age 29, was born in Calgary, Alberta, Canada to a non-horse oriented family. Chris remembers horses as being “part of the landscape” of his youth. Growing up in rural Calgary, it was not unusual to see horses roaming the open lands and hiking trails. Surbey’s first rides were as a young boy on a hired trail ride horse. What is a passing recreational event for most kids became a penchant for Chris. He implored his parents to take him for lessons at a nearby riding club and begged them to attend every showjumping event at nearby Spruce Meadows. “I think Spruce is really the reason I started watching show jumping,” he explains. In a whimsy of fate, Surbey is today a primary rider for the creators of Spruce Meadows.

While taking weekly lessons at the riding club, the young boy participated in a lesson given by local trainer, Gaia Parker. Parker lit the torch in Surbey that still burns today. Soon, the family was half leasing a horse, then bought into a full lease, and finally arrived at full ownership. As Surbey laughs, “It is a slippery slope there.” Parker and he forged a working relationship that would last for many years. Surbey honed his equestrian skills in the hunter, equitation, and jumper rings in western Canada.

Again, a chance meeting at a riding clinic changed the course of Surbey’s equestrian career. Canadian Olympic and Pan American Games medalist Jill Henselwood would coach him to the next level of competition. While continuing his education at the University of Ottawa, Surbey would ride with Henselwood as school commitments permitted. Hitting the books and the saddle, he spent a productive four years with Henselwood and participated in the North American Young Riders Championships in 2007 and 2008. After graduating from university, Surbey turned professional and worked full time for Henselwood’s Juniper Farms. His job included riding, training, and teaching, but his favorite task was working with the young horses. “It was a really cool experience in that I got to ride a lot of Jill’s up and coming horses while she was away competing. I got exposed to riding some really nice horses.”

From Juniper Farms, Surbey returned to Calgary as head trainer and rider for the Prather Family. Gaining important managerial, riding, and training experience, the young rider resigned after few years in order to pursue his own riding career. “I wanted to focus on having my own horses to ride and less on training and teaching. My friends in Calgary were nice enough to keep me riding and helping them.” In a stroke of good fortune, he was approached by the connections of Spruce Meadows.

For the last three years, Surbey has been one of several riders for the acclaimed Southern family. “They have been amazingly supportive to me and my goals and ambitions as a rider.” With Linda Southern-Heathcott and Kelly Koss-Brix managing the successful Spruce Meadows showjumper string, the results have been impressive in both North America and Europe. Unlike most American showjumping barns, Spruce Meadows is not client based. All of the approximately 30 horses under the Spruce Meadows banner are owned by the family. Surbey and his fellow employees are focused on only riding and training- no teaching, no juniors or amateurs to put into the ring. “It is a unique position in that there is no formal training with the job. It is a more European model as a sale and development program. While I like to teach, it is more fun to be able to ride and train my horses.” The stalls at Spruce Meadows both in Wellington and in Canada are filled with horses competing at the top of the sport as well as young, developing horses.

From Slovakia to Switzerland, California to Florida, Surbey and his Spruce Meadows mounts have excelled. Last weekend, the Palm Beach Masters in Wellington, FL featured the best showjumpers in the world in head to head competition. Aboard Chalacorada, a big, impressive mare, Surbey proved his mettle in the big ranks. Describing the mare as “super talented,” the rider also explained her idiosyncracies. “She likes things to be her way; she goes in a hackamore and doesn’t like a lot of pressure. Let her do it her own way and she is happy.” Chalacorada, or Chocolate as she is called in the barn, very happily flew through the timers in the huge Longines FEI World Cup Jumping class. Of the 40 horses who made it through Friday’s qualifying event, only ten jumped clean on Sunday. Surbey rode a very fast jump off, incurring eight faults on the short course, and finishing in ninth place. Chocolate will enjoy some well- deserved turn out and trail riding in the next few weeks as the Spruce Meadows connections decide on her next effort. The young Canadian is thrilled with the seven horses he brought to Wellington and looks forward to returning to prospects he left in Canada for the winter. A young rider on the rise, the q

The young Canadian is thrilled with the seven horses he brought to Wellington and looks forward to returning to prospects he left in Canada for the winter. A young rider on the rise, the quiet, humble Chris Surbey is one to root for in 2017.

Online Casino Australia – Calling to be First in Race