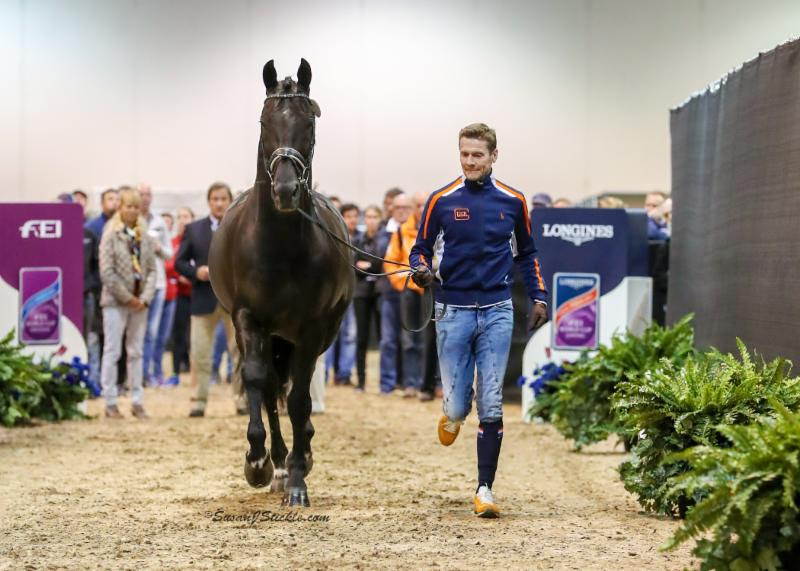 Omaha, Nebraska – March 29, 2017 – The much anticipated FEI World Cup™ Finals Omaha 2017 celebrated its first day with fans filling the CenturyLink Center. Spectators had the opportunity to watch demonstrations in the Colorado State Demonstration arena as well as show jumpers and dressage horse training in the main arena. More than 140 vendors were open for business offering everything for the horse enthusiast. The Tailgate Lounge was hopping with live music throughout the day.

The Finals, featuring the Longines FEI World Cup™ Jumping Final and the FEI World Cup™ Dressage Final, are set to begin on Thursday, March 30. The Dressage Grand Prix competition begins at 2:00 p.m. The first round of jumping takes place in the evening at 7:00 p.m.

Spectators caught their first glimpse of the world-class riders and horses in the training sessions for both dressage and jumping. They were also able to get “up close and personal” to watch riders in the warm-up area outside the main arena. Among those practicing for the jumping session was two-time Pan American Games bronze medalist Todd Minikus (USA) riding Babalou, owned by Jack Snyder and Two Swans Farm.
“I was really happy with the way my horse went today,” said Minikus. “Everything here looks fantastic and there’s no doubt that Omaha is ready for the World Cup.™”
Local resident Janine Weatherby came to the CenturyLink Center, along with students from her Phoenix Equestrian Center who are volunteering for the event. “We have been waiting for years for the World Cup™ to come to Omaha. It’s very exciting that such a significant equestrian event has come to our community,” said Weatherby. “It’s so great that you can just walk off the street and watch the riders warm up before they compete. Even if you don’t know anything about horses you can really have a fun time.”

In the afternoon, the dressage horses were presented for the horse inspection. A total of 16 horses from 13 countries came forward including the mount for 2010 FEI World Cup™ Champion Edward Gal (NED), Glock’s Voice, owned by Gaston Glock. “My horse feels good and I am really excited to be here,” said Gal. “The arena looks great, there is a lot of space to ride, it is great for the horses, great for the riders, and it looks like it will be a fabulous place for the World Cup™.”

First held in 1986, the FEI World Cup™ Dressage Final features the world’s best dressage horses and riders. The United States has won the championship twice – in 2003 (Debbie McDonald with Brentina) and 2009 (Steffen Peters with Ravel). The Final has been held in the U.S. in Los Angeles (1995) and Las Vegas (2005, 2007, 2009, and 2015).
Tickets Still Available
A range of ticket packages are still available for the Finals in Omaha! Single-Session tickets for either Jumping or Dressage range from $45 – $85 depending on the session and location. All-Session ticket packages include seats for five events in either jumping or dressage. The best seats in the house are the VIP Tickets in the first 5 rows which include access to the VIP Hospitality Lounge throughout the event! The VIP Hospitality Lounge will feature full meals, open bar, live music, concierge service and other amenities, all included with each VIP ticket.
For more information about the FEI World Cup™ Finals Omaha 2017 and to purchase tickets, please go to www.OmahaWorldCup2017.com,charge by phone at 402-930-3079 or at the CenturyLink Center Omaha box office.

Kent Farrington and Austria Beat the Field to Win $137,000 Equinimity...