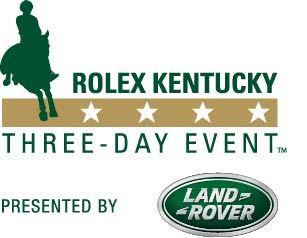 Lexington, KY, April 27, 2017-Jessica Phoenix of Canada has ridden around the Kentucky Horse Park before, but never has she found herself sitting atop the standings after the first day of competition at the Rolex Kentucky Three-Day Event, presented by Land Rover. Phoenix and Don Good’s Pavarotti sit in first on a score of 43.1. Nipping closely at their heels is Lauren Kieffer of the USA and Vermiculus (43.8) followed by France’s Maxime Livio and Qalao Des Mers (44.6).

Known as the “Best Weekend All Year,” the Rolex Kentucky Three-Day Event Presented by Land Rover is being held at the Kentucky Horse Park in Lexington, Kentucky, April 27-30.

“It’s exciting,” said Phoenix, grinning from ear to ear. “I’m so proud of everything that “Rotti” did today and I’m looking forward to the rest of the weekend with him.”

Though sunny and warm, the wind kicked up early in the day, with large gusts often setting the horses on the edge, and proving the undoing of several combinations. By the end of the day, steady performances in the wind and atmosphere were garnering the top scores.

Phoenix, 33, Cannington, Ontario, has long gone south for the winter, and has always stopped in Lexington on her way back north.  Sometimes she does the whole event and sometimes she’s withdrawn after dressage, but Pavarotti’s comfort in the ring was evident as he stayed focused and steady throughout his work.

“He’s definitely been in this ring before, and it helped,” Phoenix said. “He felt so relaxed going down the runway, and he felt confident and happy in the ring. It was a pleasure to ride him.”

Steadiness was also a hallmark of Kieffer’s test, something she hasn’t been able to count on with Vermiculus in the past.

“I’m really pleased with him today,” said Kieffer, 29, Middleburg, Va. “It’s his first four star, so he’s greener, and he’s known for being cheeky in the dressage. But he’s come out and been better and more mature this year, though I didn’t expect him to be that good in that ring. Apparently a bag blew by during my test, I didn’t know but I heard crowd gasping, and I though I’d gone off course. But he handled it really well.”

“Bug” is special to Kieffer, as he is a full brother to her first event horse and first Rolex horse, Snooze Alarm. Kieffer bought the Anglo-Arabian from breeder Lawson Williams as an unbroken three-year old, though their first few months together weren’t all the smooth.

“I brought him home and turned him out in field with Snooze Alarm and couldn’t catch him for three months,” she said with a laugh. “So he got started a little later than I planned. But it’s always special to have ones with that sort of connection.”

Livio, 29, came all the way from his home in Saumur, France, but loves Kentucky so far. “I was waiting for something like this, and it’s totally amazing,” Livio said. “I’m so happy to be here and discover the USA’s four star.”

His smooth, floating test aboard the bay Selle Francais gelding looked to be the winner, but two mistakes-they broke to canter in both trot extensions-kept them just out of the top placing.

“He’s a very generous horse and he always wants to do his best,” he said. “He wanted to do his best today, but I made two mistakes.”

Livio and Qalao Des Mers won the CCI4* at Luhmuhlen (Germany) and were second at the Pau (France) CCI4* in 2016, so they are bringing a lot of experience into this competition. “He’s a really bold horse, and he has two or three four-stars behind him so we know he’s a terrific cross-country horse,” he said. “He’s fast and courageous, my only problem is to keep him from jumping too high or going too fast and to say to him, ‘wait listen to me.’ I’m very lucky to have such a horse.”

With the first phase over for them, the rider’s thoughts turn now to Derek di Grazia’s cross-country course.

“I think it’s well suited to my horse,” Phoenix said. “He has a massive gallop stride and takes a little bit to settle in to a course. It looks bold and forward-there are lots of accuracy questions and the terrain is always a question here-but it’s open, bold, galloping and not trappy.”

Livio hadn’t finished his first walk, but the course had already made an impression. “I hadn’t finished so I can’t tell a lot yet,” he said. “But what I saw looks very exciting. I’m happy to be here on this horse.”

At last night’s welcome reception, the first of two Rolex watches to be given out was won by Jordan Linstedt of Duvall, Washington. This reception, held for the first time and the world famous Fasig-Tipton outside of Lexington, features the annual drawing among the competitors for a Rolex watch. Linstedt will do her dressage test tomorrow aboard Revitavet Capato.

This Rolex watch is one of two signature watches given each year by the event’s title sponsor – the event’s winner receives the second, even-more-coveted watch on Sunday afternoon. No rider has ever won both watches in the same year.

The Rolex Kentucky Three-Day Event is the nation’s premier Three-Day Event and one of the most prestigious equestrian competitions in the world. The International Equestrian Federation (FEI), the world’s governing body of equestrian sports, has designated the Rolex Kentucky Three–Day Event as a ‘Four Star’ eventing competition, the highest designation, which is given only to the Olympic Games, World Championships, and six annual events around the world. “Rolex Kentucky” is the only Four Star event in the Western Hemisphere and is part of the Rolex Grand Slam of Eventing.  It hosts the Dubarry of Ireland Nations Team Challenge and serves as the Rolex/USEF CCI4* Eventing National Championship.

The Rolex Kentucky Three-Day Event will be broadcast on NBC on Sunday, May 7, from 1:30-3:00 p.m. EDT. USEFNetwork.com will livestream the competition in its entirety live as it happens and will also have the coverage available on demand. FEITV.org will also livestream the event internationally.

The official charity of this year’s Rolex Kentucky Three-Day Event is Central Kentucky Riding for Hope (CKRH). Further information is available at the event’s official website at  www.RK3DE.org.