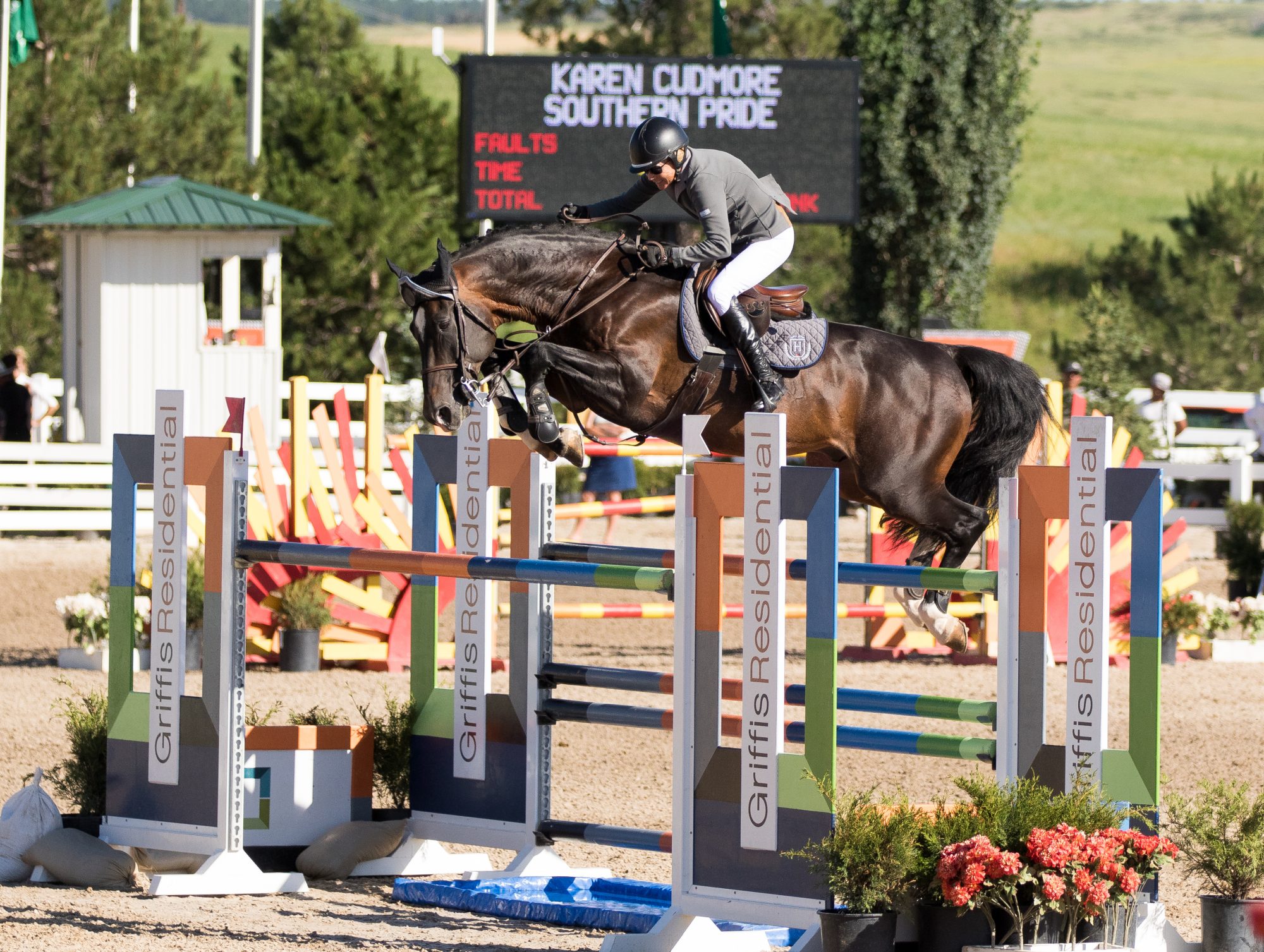 Southern Pride is a ‘one-of-a-kind’ horse. His jumping style makes him a crowd favorite and his canter awes any audience. So, when I had the opportunity to interview his owner and rider, Karen Cudmore of Heartland Farms, I was ecstatic.

Southern Pride is a nineteen year old 16.1 hand Holsteiner stallion with personality filling every inch. Called “Gorgeous” at home, he definitely embodies that name with his stunning conformation and classic, strong, stallion look. Enjoying treats, he has a sweet personality that makes him pleasant to be around on the ground and while riding.

“We bought him as a yearling after seeing him free jump and we just knew that he had an immense amount of talent and scope,” Cudmore said, explaining how they came to find Southern Pride. He became a lovely horse to ride as a five and six year old. However, the power in his jump made him hard to stay with.

“He was great to ride but he would jump so high over the jumps it was hard to stay on sometimes and stay with him,” she said, “but as the years went on, he toned it down a bit and got a little more speed, but he is still a super careful horse.” His jump never goes unnoticed in the ring, with more clear rounds than not, the power he holds is unprecedented.

Explaining how he is to ride, she said, “He’s the kind of horse that you ride with a little bit of leg, but he also has a good motor in him; he’s a little bit of everything. But, every time you get to a jump, there’s no better feeling…the power you feel in that jump is incredible.” The tone of admiration for her incredible stallion after the many years she has owned him shows how close Southern Pride has come to her heart.

No matter where Southern Pride may be, he shows off his talents. From his favorite horse-friendly venue at Maffitt Lake Equestrian Center outside of Des Moines, Iowa, to the thrilling crowd at the National Western Stock Show in Denver, Colorado, Southern Pride is bound to put on a show.

Though advancing in age, “[Southern Pride] feels better than ever now,” said Cudmore, and plans of retirement are nowhere in the near future. “I know that horse well enough, and he seems to be getting a renewal in life after putting him on a new supplement and he is doing amazing.” She also noted that Southern Pride has had the same farrier, Curtis McCullough, ever since the Cudmore’s bought him as a yearling as well as the same veterinarian, Mike Black. She credits her whole team and staff for keeping Southern Pride feeling young and fresh.

A one-in-a-million type of horse, Southern Pride has become the keynote stallion at Heartland Farms, with many babies out in the show world becoming champions everywhere. Make sure that next time you’re at a show and you hear the name “Southern Pride” announced, you take extra care to watch as he gallops around the arena and jumps the moon at every fence.

8 Ways to Get the Most Out of Every Lesson