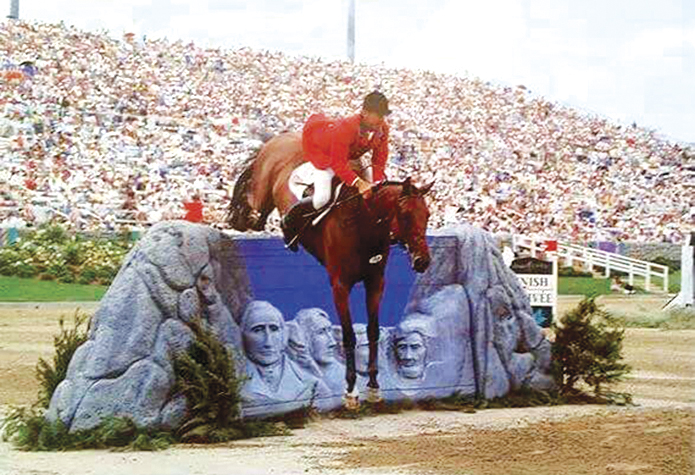 Above photo: MATZ ON RHUM, 1996 OLYMPICS

CLICK HERE to read more from the TPH April 2017 issue!

WHAT A DIFFERENCE A DECADE MAKES. Michael Matz, reluctant hero of the horse world, stood upon the 1996 Olympic podium as part of the underdog U.S. Show Jumping Silver Medal Team. Fast forward to May, 2006, and the same Matz stood upon the Kentucky Derby stand as the winning trainer of the great Barbaro.

Iconic in both form and function, riding nationally and internationally, Matz rose to the pinnacle of showjumping success. Three Olympic Games, four Pan American Games, three World Championships, and countless World Cups, Michael retired in 2000 as the all time money winning show jumper in U.S. history. A scant six years later, he experienced the thrill of ascending to the top of the mountain and then excruciating loss two weeks later with the now legendary Barbaro.

It all began so humbly, with young Michael’s do-whatever-is-asked attitude. During the summers while growing up he worked with his plumber father and helped a neighbor mow lawns on weekends. Then, the neighbor bought a few horses and Michael started to ride on weekends, eventually teaching the horses to jump over some repurposed telephone poles. Pony Club rally and local horse shows were soon to follow. Smitten by the horse bug, a star was born.

Upon high school graduation, Michael went to work for Bernie Traurig at Bloodstock Farm in nearby New Hope, PA. Feeding and grooming at first, eventually Traurig gave him the nod to ride a few with some instruction. “One thing led to another and we got to show at a few little shows. Everything started there, “ Matz explains. The young rider worked his way around the country, rapidly rising up the show jumping ranks. By the age of 21, he had made a name for himself both at home and abroad. Ten years after that first summer with his neighbor’s horses, Michael Matz made his Olympic debut in Montreal. What a difference a decade makes.

Pan American Games Gold with Mighty Ruler in 1975 and Jet Run in 1979, World Cup Gold with Jet Run in 1981, Pan American Gold with Chef in 1983, World Championships Gold with Chef in 1986, Pan American Gold with The General in 1995, and Olympic Team Silver with The General in 1996- a legend is born. “Winning a Gold Medal in Aachen was a highlight because the team was a good mixture of both experienced and green riders- and everybody made a good contribution for the team. We all worked so well together.” Matz was referring to team members Conrad Homfeld, Katie Monahan, and Katherine Burdsall.

Continuing in a soft-spoken voice, Matz recalls, “ The Silver Medal in Atlanta, in our own country when we weren’t expected to get a medal, was another top moment.” That year he was chosen to carry the American flag in the closing ceremonies at the Games. It was a nod to his heroism outside of horse sports when he and his then fiancée, D.D. Alexander, survived a devastating plane crash in 1989 outside of Sioux City, Iowa. Risking is own life, Michael returned to the plane twice and saved the lives of four children who had flown alone that day. Poignantly, two out of the four children he saved attended Barbaro’s Kentucky Derby triumph.

In twenty five plus years as an international competitor of the highest caliber, Michael Matz did it all: more Grand Prix wins than any other American of his generation, twenty consecutive years with at least one Grand Prix win, six U.S. National Show Jumping Championships, and too many medals to list. But, he was more than the sum of his accomplishments. Boots shining like new pennies, two inches of toe in his stirrup, the most perfect form on a horse of anyone on the show grounds, he was the guy who never looked like he was in a hurry, but no one could catch. He was the poster on the wall of a generation of young equestrians. Yet, as the twentieth century came to a close, Michael was ready for a change.

As a person who always dabbled with an inexpensive racehorse here and there and a wife whose family was legendary in the Thoroughbred world, the leap from one horse world to another was vast, but within Matz’ scope. Blessed with great knowledge of horses and a tireless work ethic, Michael put his heart and soul into the challenge. With characteristic modesty, he says, “It’s basically the same situation. Good horses make good riders and good horses make good trainers.”

Now on the sidelines of the jumper ring, Matz enjoys watching his daughter, Lucy, and his sons, Alex and Robert, compete. Youngest son, Arthur, prefers to ride western and spends his time in other sporting pursuits such as fishing. Michael says he helps his equestrian kids when asked, but his wife D.D. is their day-to-day coach along with other professionals at the shows. Asked how things have changed since he last competed, Matz responds, “The horses are a lot more expensive, that’s for sure! The fences look awfully big and the material is a lotmore delicate now.”

Today Michael Matz is almost as revered on the racetrack as he was in the show ring, and still getting the best out of his horses. So far, he has found Triple Crown glory twice – Barbaro in the 2006 Kentucky Derby and Union Rags in the 2012 Belmont. Now in his sixties, winning is still a part of Matz’ everyday vernacular. From the oval of the show ring to the oval of the racetrack, Michael Matz gets there first.

How to grow on Instagram as a horse rider