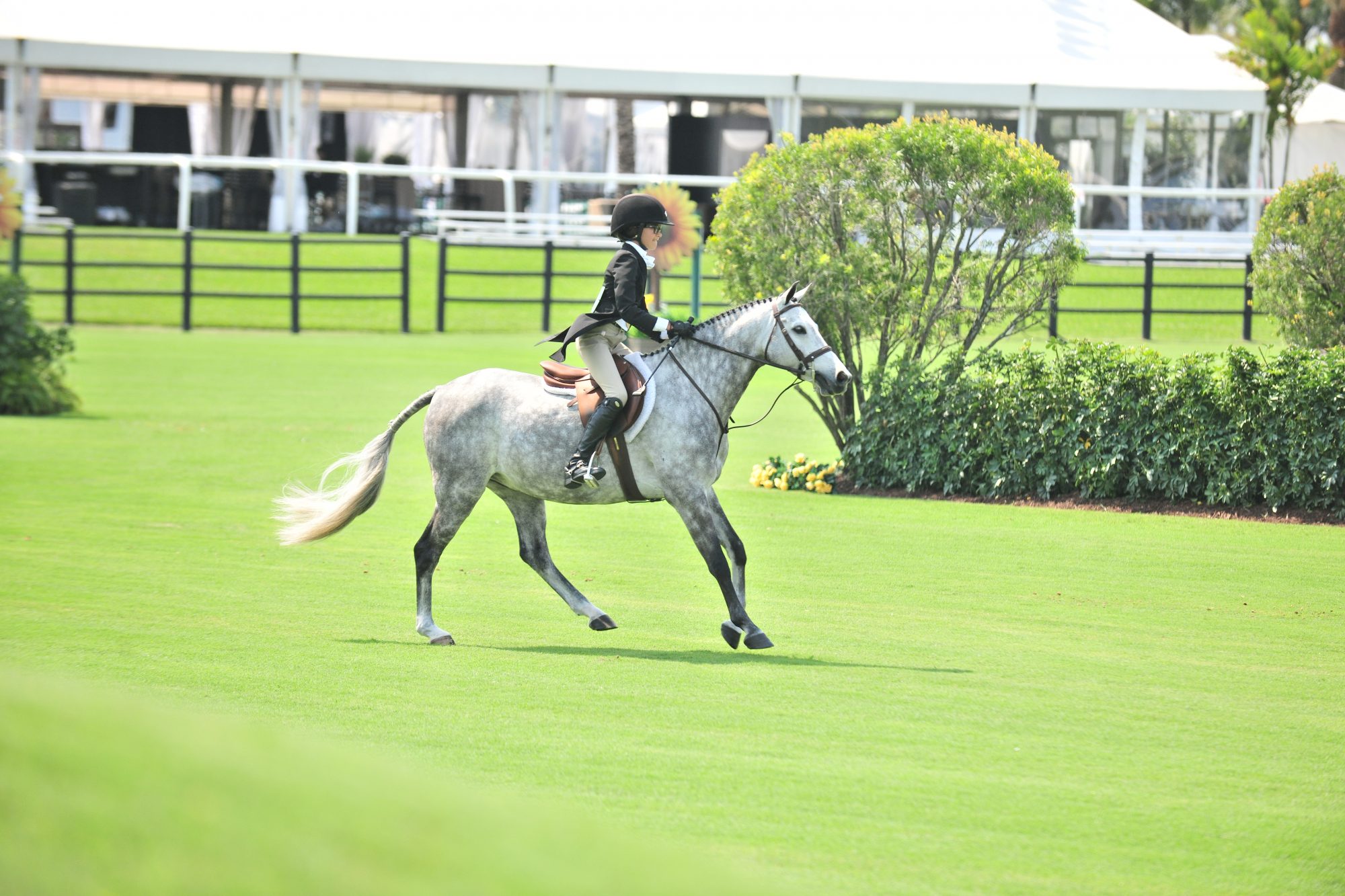 See more of the April 2017 issue of TPH by clicking HERE!

Zayna Rizvi and Smallwood Mystic are a pair to contend with at this year’s Winter Equestrian Festival in Wellington, FL. The diminutive eleven year old and her stunningly beautiful gray pony have been repeatedly and consistently victorious in the Medium Pony Hunter division. Under the tutelage of long-time trainer, Christine Trigger, Rizvi and “Mystic” have won the Championship honor three times and Reserve Championship twice so far during the ultra-competitive show series. During the World Championship Hunter Rider Week 6, they won every class in the division of 42 ponies, garnering the highest score in all pony divisions of 90 points. They appear to be a lock for the prestigious 2017 Wellington Equestrian Festival Circuit Championship honors. Bought as a six year old from Bibby and Kelley Farmer, Smallwood Mystic is a sweet, eager-to-please Welsh cross. At eight years old, he is a fresh face on the scene in the Medium Pony Hunters where many of the contenders are veteran road warriors. For his young rider, he holds a special place as “one of the first ponies that was all mine, not a hand me down from one my sisters.” Zayna smiles as she talks about her relationship with her pony partner. “He got hurt after I had shown him once and had some time off. When he came back, it was fun because I got to be a part of training him and helping him grow up into a show pony.” Brave and cooperative, Mystic and his young jockey quickly ascended the ranks of the pony division. Coach Christine Trigger has been the resident trainer for the Rizvi family for eight years. Riding is in the blood of the Wellington, FL and Greenwich, CT based family as mother, PJ, and daughters, Yasmin, Farah, and Zaynaare successful equestrians. PJ is an accomplished Grand Prix dressage rider while Yasmin and Farah have moved up from ponies to compete in the Junior Hunter, Jumper, and Equitation divisions under North Run trainers, Missy Clark and John Brennan.
At age 11, Zayna is in no rush to leave the pony ring and the training program of coach Trigger. Trigger began teaching at the family’s 20 acre property in Greenwich, CT when Zayna was three years old and the facility consisted of a two stall barn, a retired dressage stallion, and a Shetland pony. Needless to say, the facility has expanded to support the tremendous commitment the family has made to equestrian sport. Trigger remembers the first time that she lifted young Zayna onto the Shetland pony. “She always loved riding. She was so natural and gifted right from the start. I would put her on a lunge line on the front lawn and let her trot around. I remember that she hated riding pants, so she would show up to her lessons wearing a princess tutu and glitter!” At five years old, there was no stopping Zayna. On her school master medium pony, Hillcrest I’m a Blue Too, she qualified as a wild card entry into the Marshall & Sterling Children’s Pony Hunter Finals, held in the big Hunter Stadium at HITS Saugerties. The tiny girl, dressed in her mini-sized shadbelly,  went in to compete over a championship hunter course of ten jumps. The crowd watched in disbelief as Zayna guided her pony around the challenging course. The pony, favoring left turns over right, got carried away and predicted a left turn that took the duo off course at the last jump. Zayna circled and finished the course triumphantly, exiting the ring with a wide grin. For the young equestrian, it was the experience that was the greatest reward.
A full-time student at St. Andrew’s School in Boca Raton, FL, Rizvi enjoys dance as well as riding. She trains in Wellington after school under the careful eye of Trigger. The program includes concentration on the basic skills of riding with a lot of work without stirrups and over cavalettis. Trigger believes in keeping her methods simple with minimal equipment. “I make the kids work things out on their horses. They learn to figure things out if they are not going well, and have the skill to think independently. After all, [Zayna] is the one on the pony and she can feel how to work it out. And, with her natural instincts, she is usually correct.”
As for her partner, Smallwood Mystic, Zayna seems to be working their relationship to a fine tune. “He is always good,” she beams,“He’s right there. You don’t have to push or pull; he’s an easy ride.” Asked about advice from her successful older sisters, Zayna praises them. “Sometimes if Yasmin watches me, she will give me some tips, which is great. She rides so well.” Zayna plans to continue in the pony divisions for the near future. She also enjoys competing on her two Children’s Jumpers, as she “loves to go fast.”
Looking past the Winter Equestrian Festival, Christine and Zayna hope that Smallwood Mystic accumulates enough points to get into the Devon Horse Show. The indoor circuit is a definite goal as the dynamic duo continues their domination of the division. Ever the competitor, Zayna is looking forward to the challenge. “He has never been to Indoors before, but I think he will love the excitement!” It is a sure bet that this precocious pair will rise to the challenge. About the Author: Sissy is a Princeton University graduate, a lifelong rider and trainer, a USEF R rated judge, a freelance journalist, an autism advocate and Editor of The Plaid Horse. Her illustrious resume includes extensive show hunter and jumper experience. She lives with her family in Unionville, PA and Wellington, FL.

Make Smarter Bets: Here Are Some Tactic To Know About Horse Racing

How the Wrong Trainer Can Kill Your Confidence: A Cautionary Tale