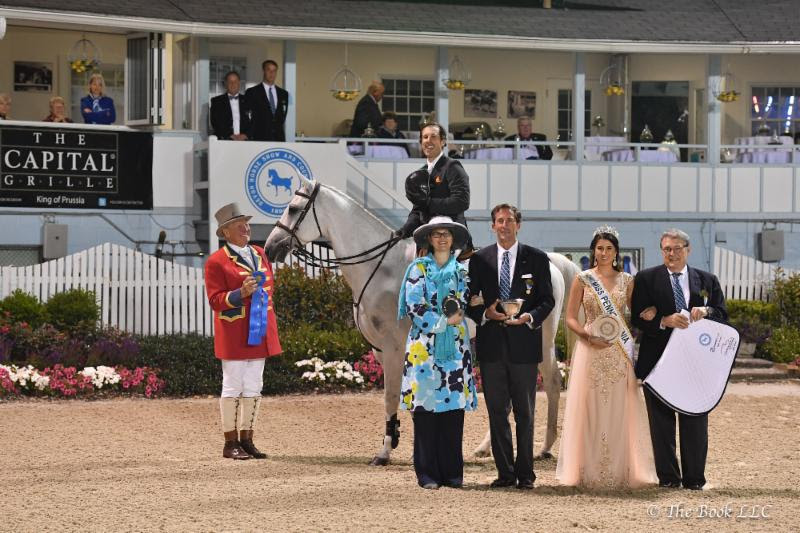 Devon, PA – May 30, 2017 – The Dixon Oval welcomed its first international show jumping competition at the 2017 Devon Horse Show and Country Fair on Tuesday evening with the $50,000 Devon Welcome Stake CSI4*. Fifty-three horses and athletes went head-to-head for the first place prize, but it was USA’s Andrew Kocher who risked it all to come away with his first Devon win aboard MKO Equestrian LLC’s Navalo De Poheton.

USA’s Georgina Bloomberg kicked off the jump-off with a clear round piloting Gotham Enterprizes, LLC’s Manodie II H in 38.700 seconds. However, Kocher followed and allowed the 16-year-old Selle Français gelding to gallop full speed around the 8-fence serpentine, stopping the timers in 35.270 seconds, a full three seconds faster than Bloomberg, to take over the top spot on the leaderboard.

The remaining 14 contenders tried their best to challenge Kocher’s time but were unable to catch the pair’s speedy performance.

USA’s Callan Solem and Horseshoe Trail Farm, LLC’s VDL Wizard were closest to the winning pace, finishing in 36.850 seconds for second place honors. Laura Chapot (USA) and her own and McLain Ward’s Quointreau Un Prince rounded out the top three in 36.860 seconds.

Kocher was thrilled to claim his first Devon win on Tuesday, as well as the Sylvester L. Quigley Memorial Challenge Trophy, and looks forward to competing Navalo De Poheton once again on Thursday in the $225,000 Sapphire Grand Prix of Devon CSI4*.

On his thoughts after the class:
“I was lucky to stay on in the jump-off! I actually had one leg over the horse – I was sidesaddle for the wrong class! It was fun, it was really fast and I got lucky!”

On his first win at the Devon Horse Show:
“Last year was the first time I’ve ever shown in the open jumpers here. I never thought I’d win one, especially not a night class! I’ve always really wanted to show here but I just wasn’t good enough to be honest! The Devon Horse Show embodies tradition and they get a crowd here every night. I had a good time and I’m really excited! I’m wondering if maybe this isn’t really happening, maybe I’m dreaming!”

On Navalo De Poheton:
“That horse is really, really fast. I’ve only had him since a week after WEF. I don’t know when the last time he jumped a class like this, it has been a while I think. There was a really terrible trailer accident coming back from Spruce Meadows a few years ago and he was in that trailer. He somehow got out, not only alive but he’s still jumping.”

On Tuesday’s course:
“I thought [the course] was just right for the first night – hard enough and the time was tight. As always, the footing is perfect here. It’s always exciting to ride in front of the Devon fans.”

On VDL Wizard:
“I’m so happy with [VDL Wizard]. He loves it here and we had a good time. I really wanted to do six strides to the last jump, I just didn’t move enough when I landed. If I had to do it over, I think I could take Andy. Some horses really grow from the adrenaline, and some horses don’t really like it. My horse likes the excitement.”

On Quointreau Un Prince:
“I was really thrilled with my horse. I thought he jumped super. I think the one place he lost time was over the liverpool. He saw the liverpool in the air and it surprised him, but other than that I don’t think I would change my ride at all. I’m just thrilled with him; he really put in a great effort. I think the horses jump very well off the ground here. You’re seeing every horse that is going in the grand prix tonight and I think the result ended up good.”

On the Devon Horse Show’s second year of CSI4* competition:
“It’s great to see all the people supporting Devon and I know the crowd really appreciates it. Hopefully it will continue on in the future. I think Devon has really raised the bar. People have always wanted to come to Devon, but now I think they have a reason to turn down other horse shows and go back to where there’s so much tradition.”