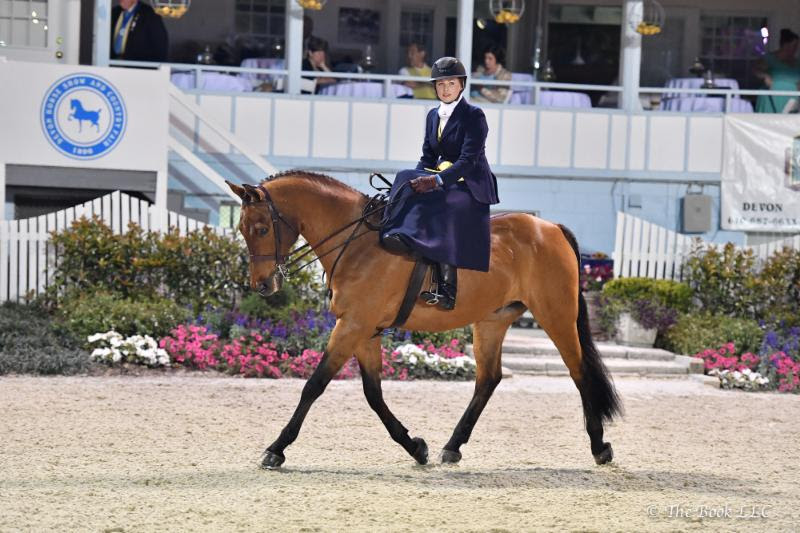 Devon, PA – May 31, 2017 – Ladies Day at the Devon Horse Show and County Fair featured a long-standing tradition: the Ladies Side Saddle championship. The hunter hack and over fences classes were featured in the Dixon Oval during the day on Wednesday, and competitors returned later in the evening to compete under the lights for the final under saddle class before pinning the champion. Ultimately, the True Blue Challenge Trophy was awarded to Gillian Beale King and Natalie Peterson’s Alta Mira.

It has been a dream of King’s to earn a Devon tricolor since she first started coming to the Devon Horse Show when she was a little girl. King and Alta Mira finished off the division with a first, second and third place ribbon. Debra Taylor and Hypnotic earned the reserve champion tricolor to round out the division.

Side saddle has been a part of the Devon Horse Show tradition for as long as anyone can recall. The style of riding was first introduced in Great Britain by Anne of Bohemia in 1382, at the time of her marriage to King Richard II. It introduced a more independent way of travel, since travel was primarily through cart or carriage back then.

On her win:
“It’s really extraordinary. I grew up coming to Devon. I am from Malvern so I am really close by. I’ve ridden side saddle at Devon as well as the pony jumpers and local hunters – a little bit of everything here. This is my first championship and it really feels phenomenal. I am lucky to have Alta Mira to ride. The Petersons own him and they’ve been really wonderful supporters. They always want what is best for the horse and it’s really wonderful to win for them and Alta Mira.”

On Alta Mira:
“I took over a new stable in Malvern in February and he was already there. I sort of inherited the Petersons and Alta Mira when I moved in to become the head trainer. I put him back into work. He had a quiet winter and we sort of had dreams of Devon in the background and it started coming together. We took him to Ludwig’s Corner and then we took him to St. Christopher’s and he was champion at both so we knew we had a really good chance here. It always takes a lot of hard work and preparation, and a little bit of luck, but it all came together today and I am so excited.”

On getting involved with side saddle:
“My dad has trained my aunt and my mom and countless other people side saddle, and when I turned 18, he said, ‘You should really try side saddle Gillian.’ I had ridden side saddle one other time when I was 12 and I felt like I was going to fall off and I never did it again. A few weeks after I turned 18 I was at Devon and we had a horse that belonged to my stepmother and I rode here and at Upperville as well. I was lucky to be reserve here and champion at Upperville. That was a great way to start. I haven’t had a side saddle horse in a few years so this was unexpected to have Alta Mira and be able to ride him. It’s been a dream come true. Devon is my home show and of course it’s a beautiful venue and the country fair is great. I am on the Young Devonaires committee here so I am very connected with this show and it’s really exciting.”