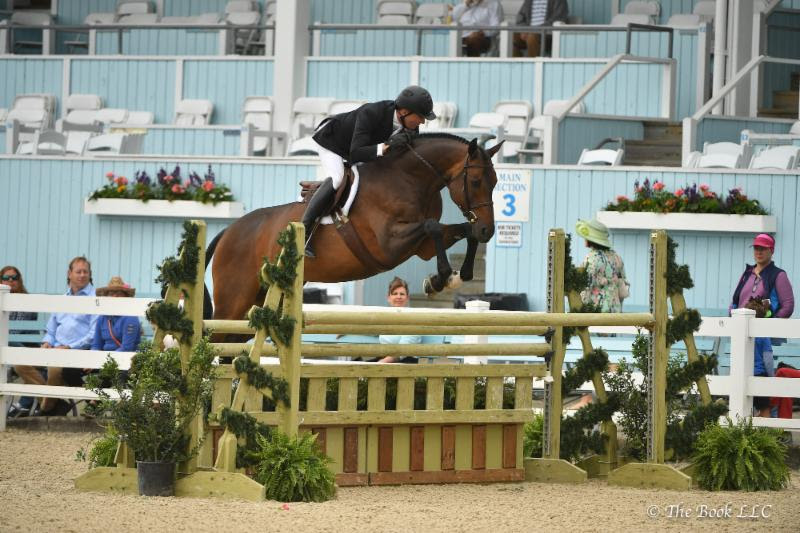 Devon, PA – May 31, 2017 – Scott Stewart of Wellington, Florida, has been coming to the Devon Horse Show for many years to compete in the professional hunter divisions, but despite winning at the event countless times, the prestige of coming to the historic horse show and earning the Devon Leading Hunter Rider award continues to be a special accomplishment for him.

On Tuesday, the pair received two high scores of 92 to claim both blue ribbons in the over fences rounds. The duo topped the handy round on Wednesday, finishing with an impressive score of 89, took third place in the stake class with a score of 89 and also nabbed the undersaddle. Originally a breeding stallion in Europe, Stewart spotted the now 10-year-old Warmblood gelding in 2013 and knew he had the potential to prosper in the hunter ring. Stewart only brings him out to compete a few times each year at the country’s foremost venues, and Devon is one of them.

In addition to Cameo, Stewart campaigned three other Dr. Parker-owned horses in the Dixon Oval: Private Life, Lucador and A Million Reasons. While Lucador shows in the High Performance Conformation Hunter division, Private Life is known for being a winning combination with Stewart in the Green Conformation Hunters. A Million Reasons achieved not only top ribbons in the High Performance Working Hunter division at the 2017 Devon Horse Show, but was also called into the winner’s circle to take the Leading Mare award and the “Bunty” Sellers Perpetual Trophy for the second year in a row.

To make his victories that much sweeter, Stewart accumulated the most points to secure the highly-coveted Devon Leading Hunter Rider award and the Helen Hope Montgomery Scott Perpetual Trophy for the thirteenth time.

On Cameo:
“Cameo is really brave. The bigger the jumps, the better. The working courses were nice and a little scopey, which was good for him because he got to try pretty hard. Ken [Berkley] and I bought him as a 6-year-old and Betsee [Parker] bought him a few months later.”

On how Cameo felt:
“He’s a great horse but I haven’t really been that lucky to have four good classes in a row. He can get a little bored, but the handy was interesting enough today that it really got him thinking. The best part about him is that he’s very comfortable and brave so I never have to worry about anything going wrong that way. He definitely was at his best this week and put a lot more effort into it.”

On the Devon Horse Show:
“Competing at Devon is always one of our goals. We really try to peak here. I have a great group of horses again this year. It’s one of my favorite shows. I like the ring, I like the atmosphere and I like that it’s only one ring. It’s nice we all get to focus and watch. You needed a 90 to get a good ribbon this year. The ring rides great and you can really gallop. It’s one of the few rings you can still gallop around.”