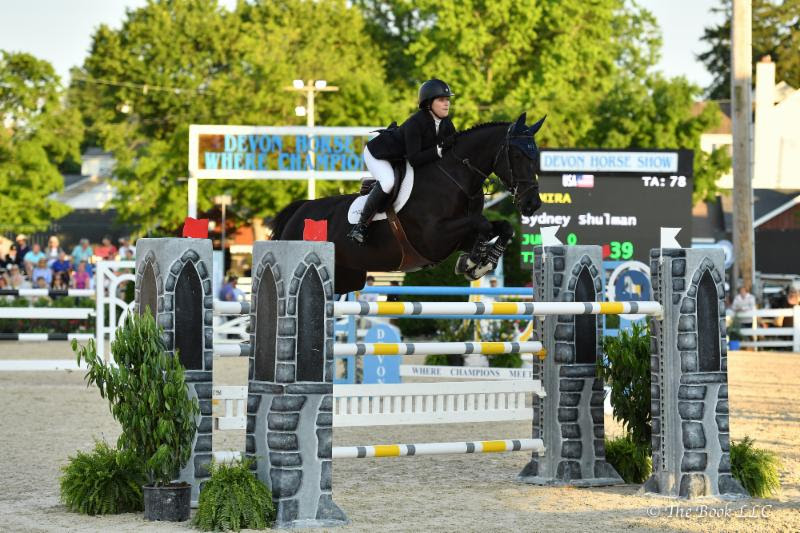 Devon, PA – May 31, 2017 – International show jumpers returned to the Dixon Oval on Wednesday to compete in the $40,000 Devon International Speed Stake CSI4*, sponsored by Herr’s. Twenty-two-year-old Sydney Shulman (USA) of Back Country Farm, based in Greenwich, Connecticut, outpaced 45 horses and riders to ride away with the win and the George T. Pew Memorial Perpetual Trophy in the one-round speed competition.

Great Britain’s Amanda Derbyshire was the first to produce a clear round over Kelvin Bywater’s tricky track with David Gochman’s Lady Maria BH. They set the standard to beat at a quick 59.760 seconds.

Fourteen rounds later, Shulman finished with the third clear round of the class, besting Derbyshire by one second aboard Wamira, a 14-year-old KWPN mare owned by BCF Group LLC, in 58.940 seconds to takeover the lead.

Throughout the remainder of the class, eight more combinations successfully completed the course with no faults, but none were able to catch Shulman. The United States’ Jimmy Torano and his own and Danielle Torano’s Day Dream completed the top three finishers in 63.340 seconds.

After recovering from an accident a year ago that left Shulman with a broken hip and Wamira out of the show ring for a year, the two are thrilled to be making their comeback this spring with a win at the Devon Horse Show.

On Wednesday’s course:
“I thought the course was great. It really suited [Wamira] well. The harder parts were off her better lead. For me, when I walked it, I had two plans – the safer route or the winning route. After Amanda went I wasn’t sure if that was beatable, but I went in there and stuck to my plan. I actually ended up adding in two lines where there were two leave outs, but she’s a super fast horse across the ground. I know her really well and she’s awesome. She jumped great tonight.”

On Wamira:
“I had a really bad accident with her about a year ago. I broke my hip and she was out for a year. This is her second real show back. The Old Salem Farm Spring Horse Show was her first so coming in I was questioning if she would jump well and if I should show her, but she had a really great career before me so I knew she would step up if needed. I bought her two years ago to be my top horse at the time so now I think she’s making her way back up.”

On her plans for the summer:
“After Devon, I go to the Ox Ridge Hunt Club and Fairfield, which are more local shows with great grand prix events. Then I am going to Israel for the Maccabiah Games and I will be there for two weeks. It’s a 2* level competition. I am pretty confident. I leased a horse there to compete so it will be exciting!”

Persistence Pays off for Bellerive at 2019 USHJA Horsemanship Quiz Challenge...