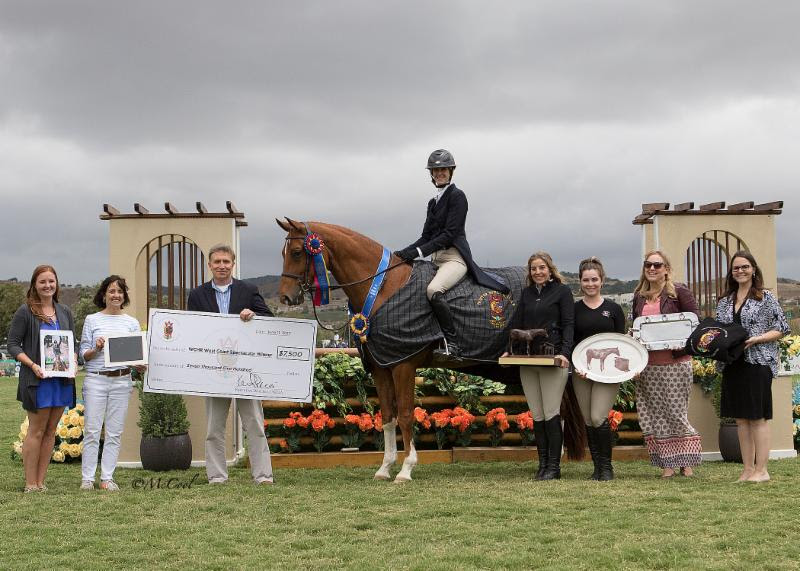 Above photo: Karazissis and Hope Town Farms’ Undeniable received a check for $7,500, a CWD halter, FITS Riding breeches, a WCHR jacket, picture frame and silver platter, as well as the Horseplay Encouraged trophy, presented by Valencia Saddlery for their win in this feature Hunter class. Photo credit: McCool Photography

But it was familiar professional faces and horses that took top honors. Jenny Karazissis and longtime ride, Undeniable, owned by Hope Town Farms, checked another impressive win off their wish list, finishing five points ahead, with an overall average of 180.75.

Finishing second this season was last year’s winning rider and fellow member of West Coast Hunter royalty, John French, who hopped on his mount, amateur rider Lindsay Maxwell’s Largesse, for the first time shortly before the class began. The pair earned an overall average of 175.75.

Hope Glynn and Sabrina Hellman’s Lake Of Stars finished a close third with a 175 two-round overall score. That result actually tied with Lexi Wedemeyer and Balmoral’s Virtue, with Glynn getting the nod based on tie-breaking methodology that weights one of the Spectacular’s two-person judging panels’ scores over another. Jamie Taylor and Catira, owned by Sue Lightner, were fifth with two solid rounds that earned an overall 171.25 score.

The class was adjudicated by two panels of esteemed judges. Panel One, whose second round score was the tie breaker in the morning’s class, included Don Stewart, of Ocala, Florida, and Shane George, of Magnolia, Texas, and Panel Two was made up of Andrea Wells, of Morriston, Florida, and Lynn Forgione, of Cornelius, North Carolina.

Although her Hunter world accolades are many, Jenny Karazissis’ eyes lit up when describing the Spectacular win “as something that had been on my radar for some time.” Owned by Hope Town Farms of Nashville, Undeniable was champion of the High Performance 3’6″ Hunter division earlier this week during the Blenheim June Classic I at the Rancho Mission Viejo Riding Park in San Juan Capistrano.

All three top winners love the Oaks International Grand Prix Field’s big spaces, and course designer Thomas Hern of Plymouth, Massachusetts, made the most of it. As the mist turned to drizzle before the class’s 8 a.m. start time, Hern was confident conditions wouldn’t mar the day, noting that there are nice wide turns and the riders can make adjustments as needed.French, who also earned the title for high-score professional earlier in the week, didn’t mind having no prior experience riding Largesse. Trainer Archie Cox “gave me a few good tips before the class,” he acknowledged. “Sometimes not knowing the horse so well can be a good thing. You’re not thinking, ‘Oh, the horse can do this or that.’ You just ride the ride instead.”

Bold paces and brilliant jumping form were common denominators for the top three finishers. “I love that there were a lot of long gallops,” noted third-place earner Glynn. “There were not a lot of set numbers (for striding) so you could pick the canter that works best for your horse.”

And with such a big field, “You can really show off your horse’s canter,” said French.

High praise for the Spectacular was another commonality. “This is one of the few Hunter Classic type classes that still exists,” Glynn noted. “There are a lot of Derbies these days, with the different bonus points options, and this is really one of the few classes, on a big field, where you can showcase the classic hunter style. And, we don’t have to do a trot jump!”

The riders appreciated that the class was staged as the feature Hunter event, with no other Hunter classes underway at the same time. The Hilltop VIP was full of fans enjoying a Breakfast At Tiffany’s themed elegant brunch.

“Everybody could come out and watch, and, as a trainer, we weren’t being pulled between different rings,” continued Glynn.

It’s the kind of special treatment that rewards owners who support the hunter divisions, Karazissis observed. In her case, that’s true of both Undeniable’s owner, Hope Town Farm’s Noah Cyrus, and the amateur who leases him for the Low Adult Hunters, Lisa Hankin. “They’ve both been very supportive of us continuing to campaign him at this level and I really appreciate that.”

Virtue, who claimed fourth overall, earned the prestigious Shapley’s Best Turned Out Award. Well-deserving groom David Vega was presented with a cash award and a bucket of Shapley’s products.

“This is my second trip to Blenheim for this great event,” said Bill Rube, funds development director for the USHJA Foundation. “The entire Blenheim staff, coupled with the support from our West Coast members, make it a very special experience. I can’t wait for next year!”

Between round one and two, USHJA presented WCHR High-Score awards to riders who earned the highest scores in their WCHR section during the week: John French earned the Professional High-Score Award for his score of 92 aboard Boss, owned by Laura Wasserman, in the High Performance Conformation Hunter section; Karli Postel took the title for Developing Professional for her score of 89 riding Bugsy Malone, owned by Alex Jayne, in the Performance Working Hunter 3’3″ section; Hunter Siebel, riding Boss earned a 91 in the Small Junior Hunter (15 and Under) section to claim the Junior 3’6″ High-Score Award; and Aya Clear rode her own Gabriel to a score of 87 in the Junior Hunter (15 and Under) section, earning her place as High-Score Junior 3’3″ rider.