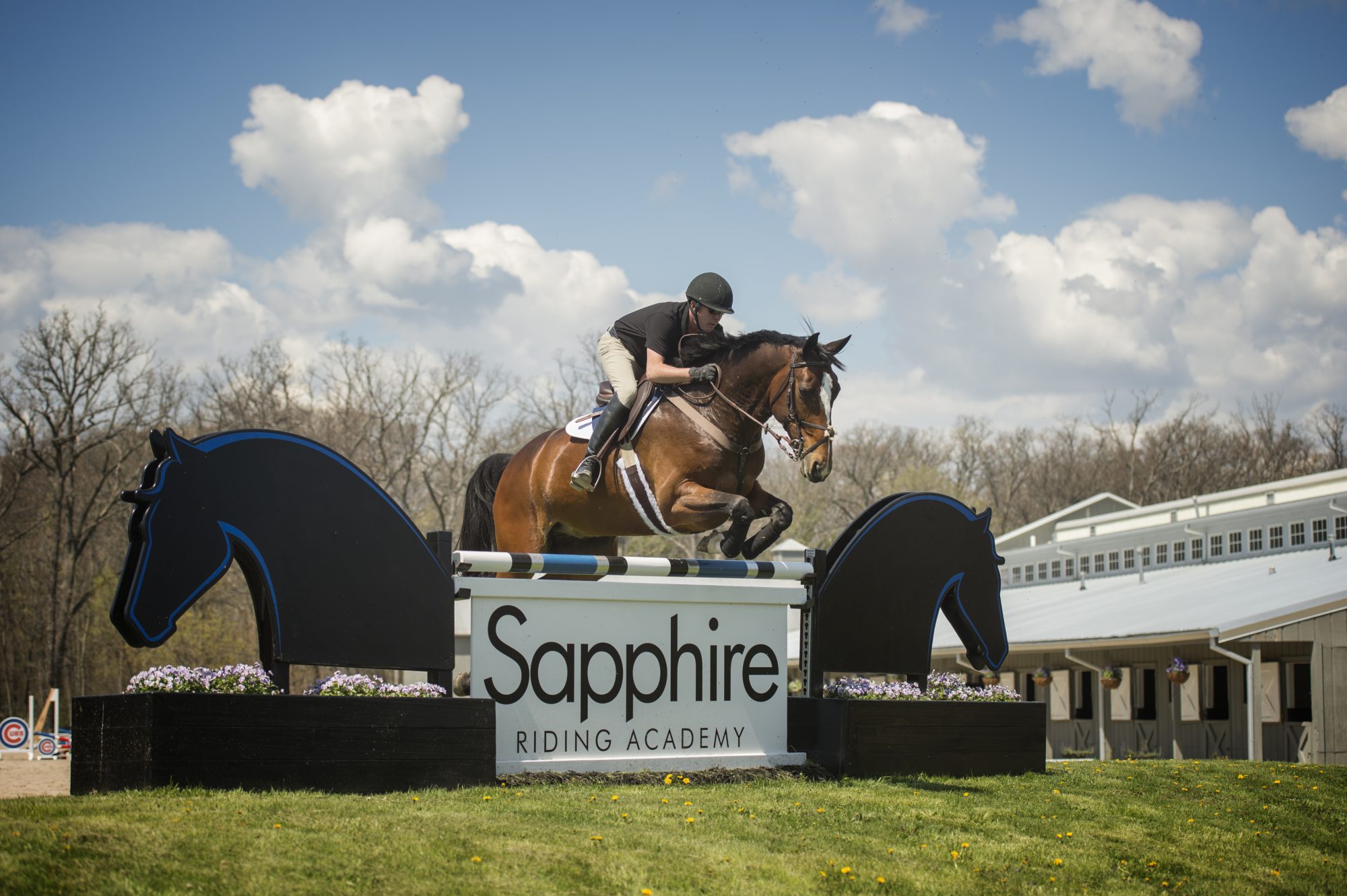 Read more from the 2016 Young Horse Issue by CLICKING HERE!

You’ve heard it said that there’s no place like home. In Doug Boyd’s case, that has rung true since he relocated back to his native Chicago. The homecoming became ever the sweeter when he and partners Mimi Rothman and her daughter Clara Ciancuillo closed on a beautiful farm in Mettawa, Ill., in May 2014, and Sapphire Riding Academy was born.

Boyd, who is the head trainer and manager of Sapphire Riding Academy returned to Chicago in 1999. “My mom had some badealth, and my family had some affairs here. My family is here. This is my home.” He grew up catch riding as a junior and was admittedly a George Morris clinic groupie when Morris came to the Midwest. “I had opportunities to spend summers at Hunterdon,” Boyd, 55, said. “I did the medal finals, and I was a member of the first Prix de States team in 1979 at Harrisburg.” As a professional, his first gig took him out of Chicago and to New Jersey. “I spent about 10 years on East Coast between workin at Red Oak Farm, and I rode some horses for Gary Kunsman at Four Seasons, and for Bob and Sharon Hardy-Cole,” he said.

From Jersey, he moved to California, where he furthered his training and teaching knowledge at Murietta Equestrian Center.Along the way, he started his own business, South Haven Farm, and he also started teaching clinics and judging. Now, with Sapphire Riding Academy, he’s back at the helm, training and teaching. “I am so grateful—having the opportunity to have this beautiful farm. I love this farm, and I adore Mimi and her family,” Boyd said.

Boyd met Rothman and Ciancuillo, while they were at another barn in the Chicago area, where Boyd was the acting pro. Mother and daughter had wanted a farm, and when one came on the market late November 2013 for sublease about 45 minutes north of Chicago, they decided to go into business together.

The name? Sapphire is Rothman’s favorite color, and Ciancuillo liked the way “riding academy” sounded, since their goal was to also teach younger and beginner riders, with a focus on education and horsemanship.

While Ciancuillo started riding from a very young age, Rothman only got in the saddle after she’d known Boyd for a while.Rothman is deaf, a result of medication administered to her for pneumonia when she was a baby. Her daughter encouraged her to try riding.

“When I met Doug I said, “you have to be patient with me.” I tried it, and it was like therapy for me,” said Rothman. Boyd found her a safe horse, and now Rothman is part of the Sapphire Riding Academy show team. The student and teacher have overcome difficulties that accompany Rothman’s hearing impairment by creating their own system. “We have our own symbols to help her along while she’s on the move,” Boyd explained. “When to use the leg; when to use the hands. During lessons, we stop often to make sure everything is clear. At a horse show, we use big hand movements! It has been a whole different approach into my teaching.”

Coincidentally, Boyd is also hearing impaired and wearsdevices, though his impairment is not to Rothman’s severity.

Despite the extra work it takes to learn without hearing, Rothman held her own this winter during the HITS Ocala circuit. She rode her horse, Pippin, to the reserve championship in the maiden adult equitation division, while Ciancuillo picked up tricolors in both adult hunters on Maestro, and with Nicholas and Reflection in the adult jumpers. Between Rothman, Boyd and Ciancuillo, they brought seven horses down for half of the circuit.

Boyd said, “Florida was an amazing circuit. Mimi has a horse named Calido’s Son (Calido I—Pusteblume I, Mytens), a Holsteiner gelding. I showed him in the 3’6” Performance Hunters, and we ended up as circuit champions.” He also jumped some grand prixes with Berkeley III. But the season in Florida was ultimately possible because the SRA team found someone to hold down the fort in Illinois during the winter. Boyd had run into Ashley March in 2015 at the American Royal (Kansas City, Mo.). March also grew up in Illinois, and rode under Kim Gardiner and Alex Jayne in the equitation, as well as spending time as a working student for Missy Clark at North Run Farm in Warren, Vt.

“She was always beating my kids,” laughed Boyd,complimenting March’s talent.

When March’s parents relocated to Arizona, she followed them out there in 2010.

“A good family friend owned a farm there, and I started riding for her for a year. I started my own business with a partner, but my family moved back to [Chicago] and I found it hard to be out [in Arizona] by myself. I wanted to come back to the Midwest,” March admitted. She accepted an offer to work for a private family farm in Kansas City, Mo., which got her closer to home; but she still wasn’t quite close enough. That’s about the time that she ran into Boyd. “[Seeing him] made me homesick,” she said.

So March joined the Sapphire Riding Academy team in January 2016 as assistant trainer, just a few weeks before everyone headed to Ocala.

“I have never seen better 24/7 care and management for horses, and Doug has a very simple way of teaching that makes it easier for students to understand,” March said. “I had really been holding the reins to everything until Ashley came in. She’s great. [Before she was here], we started out showing mostly local—Traverse City, Mich., and Gulfport, Miss., last winter. Ashley stayed home this winter, and Ocala was last minute,” Boyd said.

Now with the manpower to really get things moving, Sapphire Riding Academy is focusing on their future. “We are expanding our riding school; three nights a week we stay open later to accommodate after school and after work clients.

“We are expanding our riding school; three nights a week we stay open later to accommodate after school and after work clients. We are attempting to do our first summer camp, and hope to be able to coach the riding academy students to the place that they can join the show team,” said Boyd. “We’ve been very selective as we’ve been moving along. A few boarders here and there.”

During Showplace Productions’ Spring Warm Up II at the beginning of May, the team continued their winning ways. Boyd rode Calido’s Son to the 3’6″ Performance Hunter championship while Ciancuillo and Reflection were reserve champions in the schooling and low child adult jumpers. Berkley III and Boyd were champions in the 1.30-meter jumpers, and student Ariel Reifman made her debut in the short stirrup hunters and equitation and was also champion!

Look out for the Sapphire Riding Academy crew at horse shows around the Midwest this summer and fall—anywhere from Nebraska to Kentucky, to Lamplight Equestrian Center (Ill.). “This venture is sort of a comeback for me—to get back to Florida to start the year, and be on the road and stay competitive,” Boyd said. “We’re a force to be reckoned with.” Carbon 60 and Horse Health: What You Need to Know About Medicinal Uses of C60

How to Entertain Yourself after Sustaining a Horse Riding Injury

We Have to Fix Our Audience Problem Before We Can Fix...

Dapple Gray Glow Up: Before and After Progression Pictures