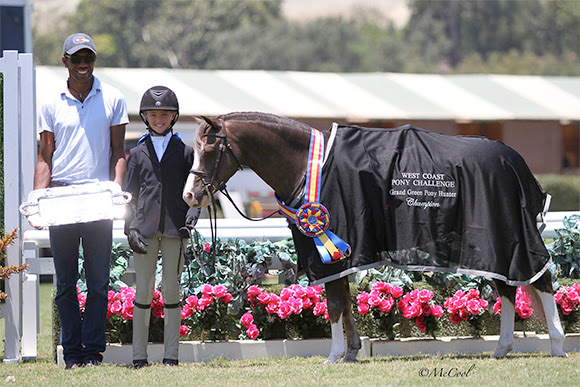 San Juan Capistrano, CA – June 26, 2017 – Green Ponies of all sizes took to the grass over the weekend to compete in the West Coast Pony Challenge, presented by USHJA Zone 10, and it was Evelyn Walker who emerged as the overall victor with Captain Crunch. Walker and her small pony accumulated a total of 35 points over the two days of competition, winning three out of five classes in their division. They championed the combined Small/Medium Green Pony Hunter section in addition to earning the Overall Grand Green Championship.

“He’s green but loves his job!” Walker said of her loveable pony partner of a year and a half. “He is the kind of pony that people dream about and I’m so grateful to get to do this with him. It’s been so much fun shaping him into a pony hunter with my trainer, Michael Savage. He has come such a long way.”