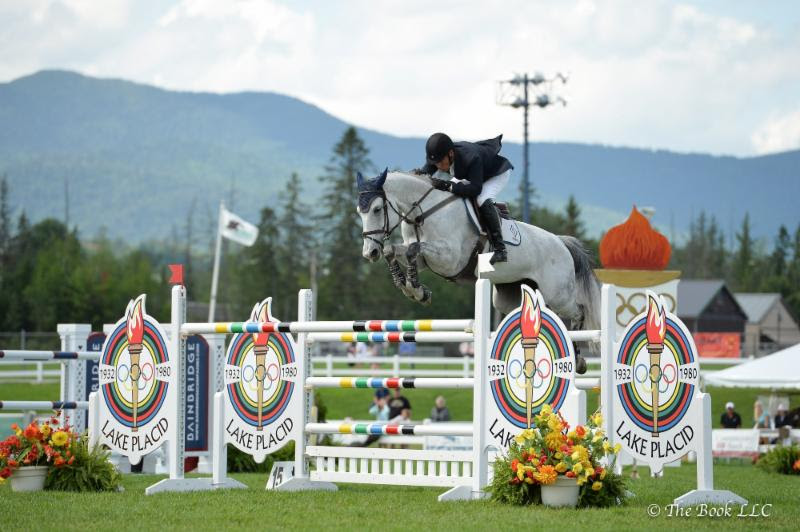 Six of 26 entries qualified for the jump-off by riding without penalty over the 16-effort first-round course designed by Michel Vaillancourt. Torano was the first to return for the 8-effort tiebreaker and he rode his 12-year-old, Oldenburg mare owned by Missy Clark to a clean ride in 38.979 seconds.

After Amber Harte missed his time with a clean ride in 39.600 seconds on Austria 2, two riders — David Raposa on S&L Sage and Francois LaMontagne on Chanel Du Calvaire — tried leaving out a stride to the last fence. The strategy helped them both beat Torano’s time, but both dropped a rail at that last fence for four faults.

“The last line was a bit of an option and we thought about doing seven but I didn’t think you could leave the jump up doing seven,” Torano explained. “I did eight and those who tried seven had the rail down so it worked in my favor.”

After Raposa, winner of the class in 1990 on Shady Lady, scored four faults on Iliona, it came down to Laura Chapot who had snatched a win away from Torano on the last ride in Friday’s $30,000 Prevost Jumper Classic. Riding hard to the first fence, Chapot and Thornhill Kate had it down, ending the drama and giving Torano his first Grand Prix win in Lake Placid since he won the I Love New York Grand Prix on Aguila in 2005.

“It’s never over when you have Laura Chapot going behind you,” Torano said. “She’s a very fast rider and she beat me on Friday going dead last so that was in the back of my mind. When she came in I thought, ‘Oh here we go again,’ but this time it didn’t work out for her and fortunately it did for me.”

With the only other clean round in the jump-off, Harte and Austria 2 placed second while third went to LaMontagne. Raposa was fourth on S&L Sage and sixth on Iliona with Chapot taking fifth.

Prior to the Grand Prix, Alexandra Pielet won the $10,000 Mirror Lake Inn Junior/Amateur-Owner Jumper Classic, a member event of the Show Jumping Hall of Fame Jumper Classic Series. Eleven of 30 horses qualified for the jump-off and Pielet earned the win by riding Helene Ve to two clean rounds and the fastest jump-off time of 34.756 seconds. Placing second was Sam Walker with a clean jump-off ride in 36.891 seconds on Twan and third went to Brian Sweeney on Calvados with a clean jump-off ride in 37.356 seconds.

In the $5,000 The Wild Center Children’s Jumper Classic, Zayna Rizvi topped a 54-horse field on Valdez. Fifteen entries qualified for the jump-off and Rizvi claimed the win with two fault-free rides and the fastest jump-off time of 30.679 seconds. Second place went to Ericka Koscinski on Ludwig’s Luna with a clean jump-off ride in 31.329 seconds. The Wild Center Children’s Jumper Classic is a member event of the North American League (NAL) and Washington International Horse Show (WIHS) Series. The NAL features two year-end finals: at the Pennsylvania National Horse Show in Harrisburg on October and at the International Jumping Festival in San Juan Capistrano, CA in September. The WIHS Series holds Finals at the Washington International Horse Show in October.

The Lake Placid Horse Shows offer over $535,000 in prize money and feature the nation’s best horses and riders competing in four show rings. The horse shows offers more than 100 classes of competition each week for all levels of competition ranging from young children on ponies to grand prix competitors and Olympic competitors and medalists. Each show is USEF ‘AA’ rated for hunters and 6* rated for Jumpers.

Richard Spooner Makes it a Hat Trick and History in the...