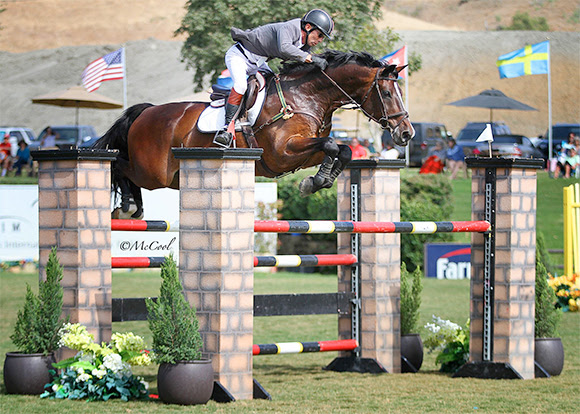 San Juan Capistrano, CA – July 2, 2017 – Canadian John Pearce celebrated Canada Day with a victory. Pearce and Chantico cleared both rounds of the $30,000 Markel Insurance Grand Prix, securing the win with a swift jump-off time of 42.91 seconds. Of twenty-two entries, four qualified for the jump-off, and two emerged double clear. Sophia Mossman took home second place aboard her own Carre for her double clear effort in 47.20.

Pearce was the last one to master the 1.40m course set by course designer Marina Azevedo of Brazil. After watching Mossman jump off clear and third place finisher Serigo Nieto have rails, veteran grand prix competitor Pearce and Chantico soared over the jump-off track with great efficiency to claim victory. Along with the blue ribbon, Pearce took home a pair of Roeckl Sports gloves, an embroidered SmartPak cooler, and an engraved pewter plate.

“I had the advantage of going last in the jump-off and watching the other riders, so I knew exactly what I had to do and it worked,” he said. He has worked with Chantico, who is owned by Karen Ball, for four years now. The horse was previously a dressage horse but has adapted well to his new career path. “He suffered from Attention Deficit Disorder, so it was really hard for a dressage rider to deal with him,” Pearce explained. “He’s been a bit of a project for me for the same reason, but he’s really starting to come into his own now.”

Catch the duo next at Blenheim EquiSports’ Showpark Festival Series at the Del Mar Horse Park beginning July 19. The Series will feature five separate grand prix events, each offering prize money up to $40,000.

David O’Brien and El Balou OLD Finish on Top of the...