Home Blogs Barn Lounge The Horses That Led Us to Independence 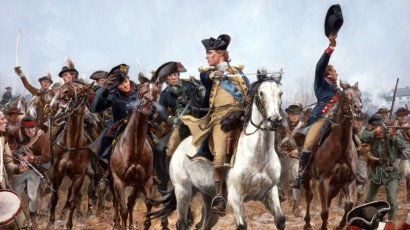 With the Fourth of July upon us, we’re all stocking up on fireworks and getting ready to fire up the grills. However, when it comes to our horses, we seem to completely leave them out of the celebration. But why? The history books that we were taught from barely gave the horses credit. Whether people would like to admit it or not, history thus far has depended on horses.

Have you ever heard of the phrase, “The British are coming!” Well, those are the famous words of Paul Revere from his fabled midnight ride on April 18th, 1775, to warn Patriots Samuel Adams and John Hancock that British Troops were coming. The ride, of course, wouldn’t be complete without the trusty steed, which Revere said was simply “a very good horse.” This horse carried on its back one of the most famous and well-known American Patriots during the war to deliver a simple message that changed the course of history. It would be silly if it went down in our textbooks as the midnight run of Paul Revere. When on horseback, some things are much easier, while some things are also much harder. Getting places certainly is not a struggle for cavalry units, which are soldiers on horseback, since they can just give their horse a kick, and be off much faster than those on foot. However, when it comes to things like shooting, being astride becomes more of a struggle. Accordingly, cavalry units were used for patrol and moving weapons and supplies.

The first cavalry unit used in the Revolutionary War was that of Captain John Learys of the Light Horse Troop of New York City, an independent Company of forty light dragoons, or several cavalry units put together. On June 21st, 1775, Washington asked Congress to accept them as a Continental unit.

To win the smaller battles in the war, the men in the Light Horse Troop would do something called ‘reconnaissance.’ Reconnaissance is when a military unit observes a certain region to locate an enemy. The cavalrymen could successfully spot the British from miles away because of their flashy red coats, and were able to predict their maneuvers. Performing reconnaissance helped to win battles, all thanks to our men on horseback. When the British noticed that they were losing more and more, they sent out more troops from England. George Washington then ordered the cavalrymen to patrol the Atlantic coast line, and act as messenger men if the British were spotted coming in by sea. In total, George Washington had about 260 cavalrymen. The units raided 300 tons of the British’s hay supply, leaving the British army and their horses helpless. Without the horses, the British couldn’t move weapons or supplies.

Without the cavalry troops used in the American Revolution, the newfound Americans would not have stood a chance against the massive British Army. These horses provided them with faster feet to travel farther in a shorter time, and stronger means to carry heavy supplies the men could not move.

Horses have been useful animals since the dawn of history. Whether they’re used for a sport,  work, or war, they are loyal and steadfast animals.

You Can Give Yourself Permission to be a “Bad” Horse Owner...