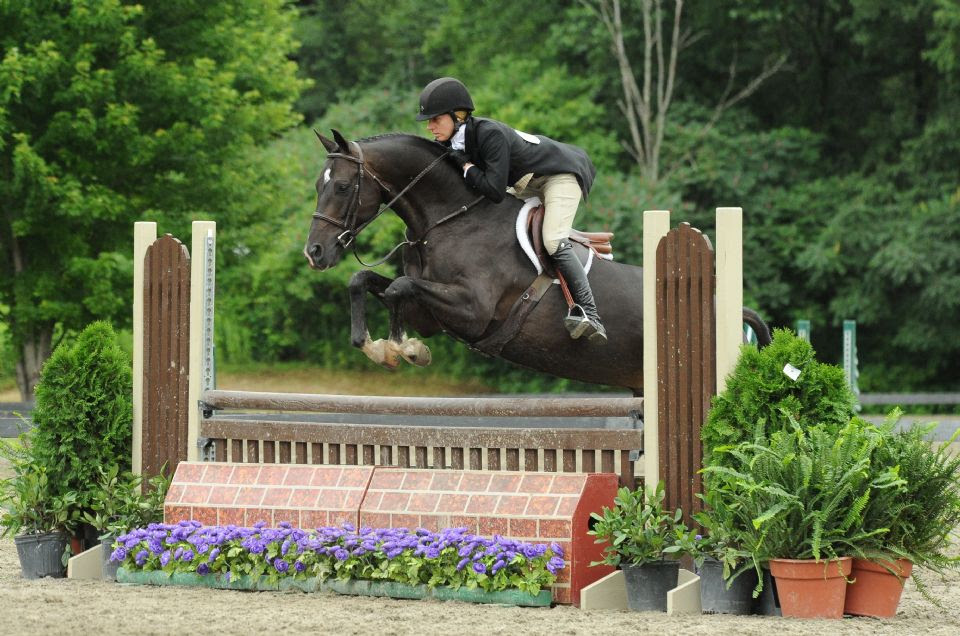 Course designer Doug Russell of Ocala, FL, designed the derby track, which saw a starting field of 25 horses with the top 12 returning for a handy round. Momrow was the final rider to return carrying forward a score of 86, which was the top score from the first round. She showcased the handiness of Curb Appeal, owned by Monty Kelly, in the second round to receive a handy score of 83.25 from judges Chris Wynne of Virginia Beach, VA, and Troy Hendricks of Glenmore, PA. Momrow’s total score of 169.25 secured the win.

Less than a point behind Momrow to finish second was Cassandra Orpen of Westport, CT, riding Major Key with a final score of 168.5 after combining scores of 85 and 83.5. Gregory Prince of Sherborn, MA, rode the dark bay gelding, Benicio, to third place with scores of 82 and 85 for a 167 total. Fourth place was awarded to Sarah Barge of Bloomfield, NY, riding Guess B. Barge, a two-time winner of the Vermont Summer Festival hunter derbies in 2016 coupled scores of 81.5 and 84 for a final score of 165.5. Kristen Bumpus of Concord, MA, rounded out the top five on scores of 80 and 83 for a total of 163 riding the bay gelding, Carington.

During the awards presentation of the top 12 riders, Alison MacDonald, 17, of Stowe, VT, was recognized as the high-point junior rider after piloting Chalk Hill to eighth place while Macenzie Ingenito of Waltham, MA, was named high-point amateur after rounding out the top 12 aboard Missdemeanor.

It feels great,” said Momrow, who also won the $10,000 USHJA National Hunter Derby riding Curb Appeal during week seven of the 2017 Winter Equestrian Festival in Wellington, FL. “He seems to love the derbies and he jumps a little extra special in these classes. It has been really fun to do them with him. In a lot of derbies, he wins the first round and then gets a little green in the handy, but today he stepped it up and stayed consistent.”

I don’t know if it was his plan for Curb Appeal to be a hunter, but the second I rode him it became our plan,” said Momrow, who trains alongside Kelly at Stepping Stone Farm in Albany, NY. “Next year, I would like to move him up to 3’6” and bring him into the international derbies.”

Stepping Stone Farm has 38 horses at the Vermont Summer Festival with riders spanning all levels. Of their experience at the show, Momrow noted, “We have had a great time so far. We have riders from the short stirrup right through the equitation, amateurs, and the grand prix. On Mondays, we always go out and do fun things in the area, so it’s always a fun summer bonding experience for the barn.”

In addition to her share of the prize money and a monogrammed winner’s scrim from Mona’s Monograms, Momrow was presented with a Land Rover Experience Driving School off-road excursion by class sponsor, Eastern Hay.

Competition returns to the Grand Prix ring at the Vermont Summer Festival on Saturday, July 15, highlighted by the spectator-friendly $30,000 Battenkill Grand Prix beginning at 1 p.m.