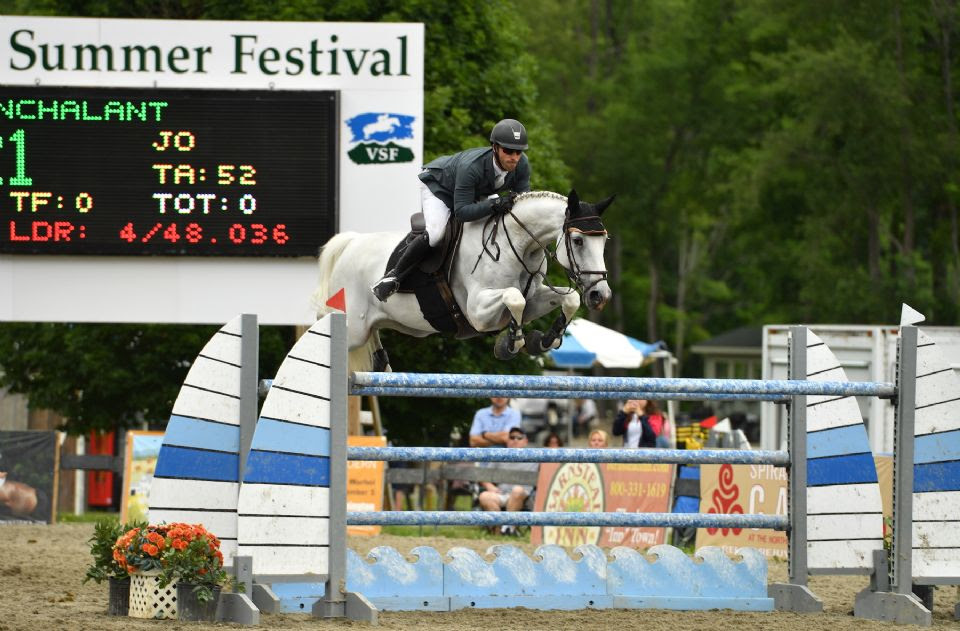 Having won the $30,000 Vermont Summer Special Grand Prix during opening week, Metell returned to win again in week two, topping a starting field of 28 entries.  Metell and his mount, Donchalant, were the only pair to turn in a double-clear performance in 43.52 seconds over the track set by Ireland’s Alan Wade, who will be the course designer at the upcoming 2018 FEI World Equestrian Games in Tryon, NC.

Lauren Fischer, 19, of Bedford Hills, NY, qualified two mounts for the tie-breaking jump-off.  She placed second aboard Rissoa d’Ag Bois Margot with four faults in a time of 47.61 seconds and took third with one rail down in a time of 48.03 seconds riding My Pleasure.

Having won the $10,000 Vineyard Vines Welcome Stake on Thursday, July 14, Jimmy Torano of Wellington, FL, took fourth in the grand prix with a four-fault jump-off round in 49.039 seconds, this time riding Dutch Lady. Having incurred three time faults in the first round, Veronica Bot of Burlington, ON, rounded out the top five riding Cool Down 3. In her next competition appearance, Bot will be representing her home country of Canada at the 2017 Adequan/FEI North American Junior and Young Rider Championships held this year in Saugerties, NY.

“She’s easier and better than I ever thought she could be,” said Metell of his winning mount, Donchalant, a nine-year-old Dutch Warmblood mare (Larino x Amaretto I) owned by Wolver Hollow. “She feels so careful in the ring. There’s bigger classes that, hopefully, we will get to jump and we will see how she steps up for those in the future, but we couldn’t be happier with her.”

“When I first saw her, we were in a tiny indoor arena where you could barely jump a three stride,” recalled Metell. “We jumped a few jumps, she seemed like the right type for my riding style, and that was that. I didn’t even sit on her again after five or six jumps. She’s obviously more than we could have hoped for.”

After celebrating the first grand prix victory of his career last week, Metell’s expectations were back in check when he rode into the ring for the $30,000 Battenkill Grand Prix, presented by The Equinox Resort.

“I thought this was the last thing that was going to happen after last week and just went in and tried to have fun,” said Metell, who has a perfect record of two for two wins in grand prix competition. “It felt like more course than last week, which I expected it to be because it was a more competitive class. I don’t know if it’s the horse or that I am just not used to jumping classes like this, but it feels easy for her.

“The track reminded me of my equitation days,” continued Metell, 27, who enjoyed a successful career in the equitation ranks, including a win in the Platinum Performance/U.S. Equestrian Federation Talent Search Finals – East in 2009. “There were a lot of bending lines but she is nice and adjustable, so bigger courses in a ring like this don’t feel like they are that much work for her.” 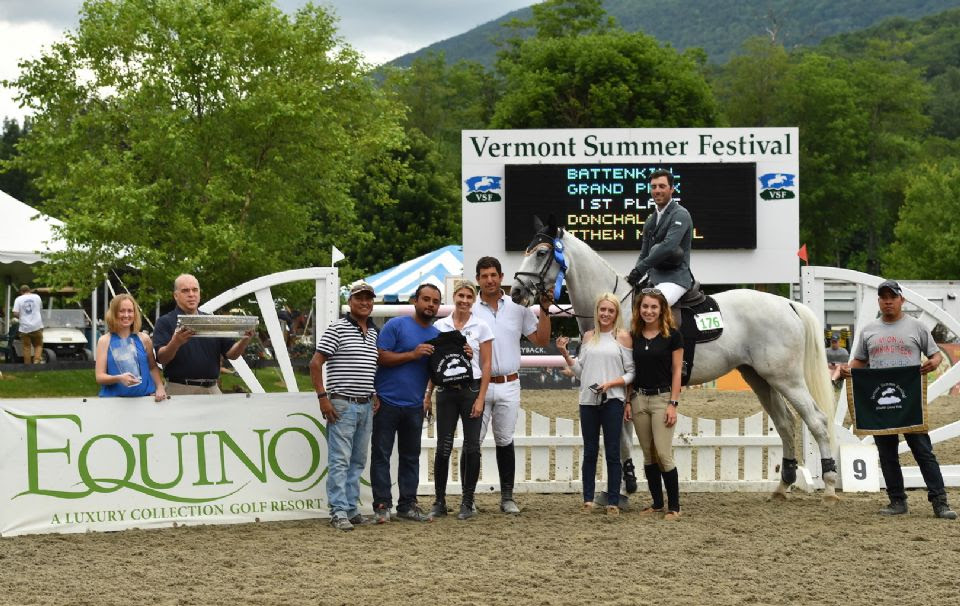 Matthew Metell and Donchalant were presented as the winners of the $30,000 Battenkill Grand Prix by
Caitlin Darnall (far left) and Rodger Aberth (second from left) representing The Equinox Resort,
along with members of the Wolver Hollow team at the Vermont Summer Festival on Saturday, July 15.
Photo by Andrew Ryback Photography

In recognition of his victory, Metell was awarded a scrim by Mona’s Monograms as well as a crystal trophy. In addition, the Vermont Summer Festival recognized his groom, Rolando Amaya, with the weekly Grand Prix Groom Award in honor of his hard work preparing Donchalant for grand prix competition. Amaya was presented with a monogrammed jacket and coolerette from sponsor Glenn Geary of Horsewatch.

Second-place finisher, Fischer, jumped her first grand prix at the Vermont Summer Festival in 2015. She returned to the event this summer before starting her sophomore year at Pace University in New York, NY, this fall.

“I am so proud of them all the time,” said Fischer of her two mounts. “Rissoa d’Ag Bois Margot is a new horse for me and I just started showing him in May. I have had My Pleasure for two years, so he is a very good friend. They both always jump so amazing for me and I had a lot of fun out there today, which certainly helps.”

The second week of show jumping competition at the Vermont Summer Festival continues with Classics for adult, children, and junior/amateur-owner competitors in the Grand Prix Ring on Sunday, July 16.