Home Blogs Beyond the Break 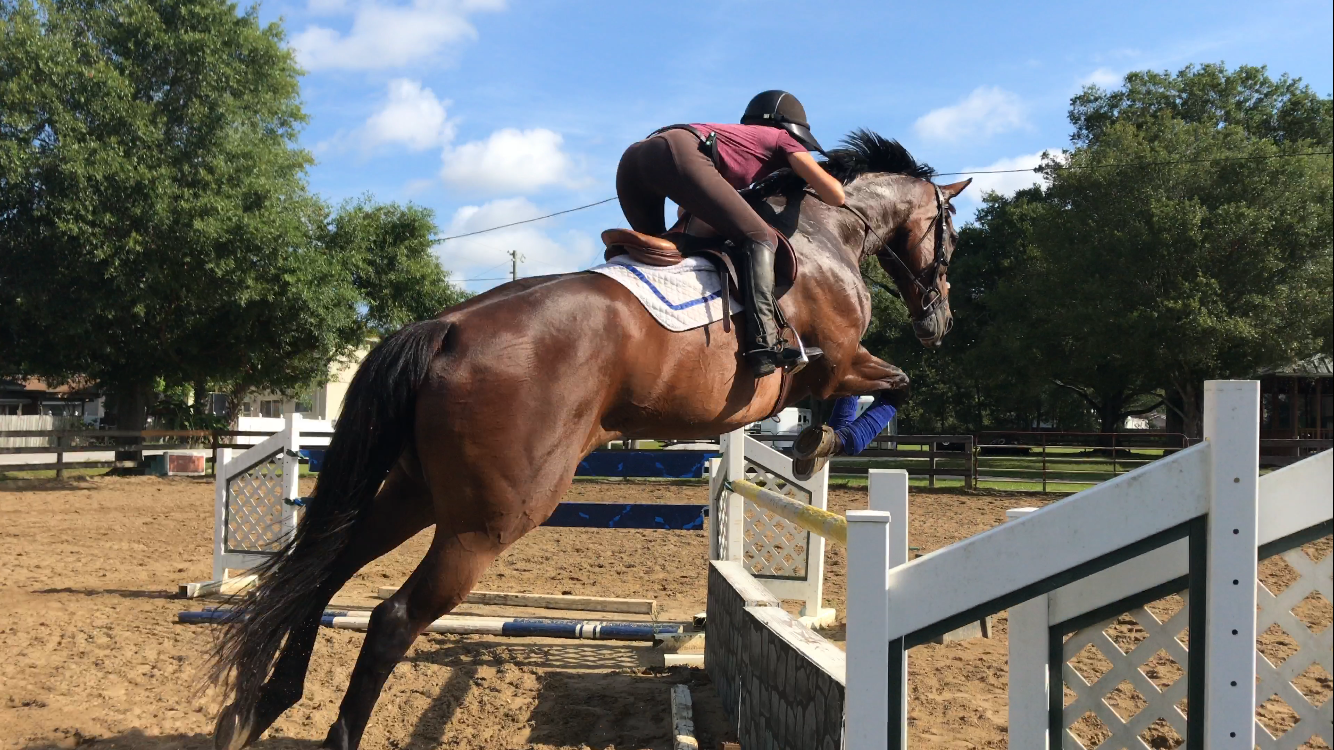 I’ll never forget the first time I saw Seattle, that big, beautiful mare floating across a grass field. She was jaw dropping, embodying grace and athleticism. I was 18 years old and fresh out of high school.  My old reliable show horse, Kirby, had given me all he had to give and was ready to step down; he was a great horse with a heart of gold, but it was time for me to move on to the next adventure.

We were at a horse show in Shelbyville, TN, where I was showing Kirby, when my Dad called and said there was a horse I needed to see.  I’ll never forget my first ride on Seattle. She felt like a rocket, ready to blast off. The way she carried herself drew everyone’s attention; that was the first time a horse had ever given me goose bumps and it’s only happened once since that day. Seattle was by far the most powerful horse I had ever ridden and it didn’t take me long to realize this could be the future Grand Prix horse I had been looking for.

The 5-year-old, 17.3 hand, Appendix Quarter Horse mare would need some training, but I had no idea how hard our road ahead would be.   Seattle was the most athletic, powerful, agile horse I still have ever seen, but she was also the most hot blooded horse I had encountered.  On top of all of that, to say Seattle was spooky is an understatement.  The horse literally spooked at her own shadow and of course that big, powerful, agile mare had some moves on her that came out of nowhere.  If there was a jump that had been moved in the ring, Seattle would spook. If butterfly or a bird flew near the arena, you’d better hold on. Needless to say, this made training very difficult.

We had never been ones to have my trainer ride my horses. My  parents couldn’t really afford it and it was not really my style.  At the time, we were at a self-board barn, Rio Lobo was the name, about 5 minutes from my house. It was a quiet place, with plenty of room for the horses. Sadly, it has since been bought by developers.  I had been on more than my fair share of green horses at that time, so I was fairly confident. But, there were many times where Seattle made me doubt myself, she was so hard. I thought at one point I was going to have to send her to a trainer for full training, she was just so hard.

When we went to our first two shows, my trainer and I spent hours with Seattle, showing her everything.  She was terrified, but by our third show, Seattle had really turned a corner. She earned top ribbons in the baby green division at the Lake St. Louis horse show against great company, such as the late David Wright. Things were finally starting to go in the right direction.  All of that hard work was paying off and I was starting to realize that even though Seattle challenged me daily back then, she was turning me into the kind of rider that I had always wanted to be.

We were getting ready to go to our fourth show and Seattle was doing great. It was a dreary, bitter, Sunday in January when I pulled Seattle out of the pasture. As I was grooming her I noticed a small, but deep cut on the inside of her right femur. She must have been pestering one of the older mares she was going out with, she never did have great spatial awareness.  My mom and I looked at it and decided to call our vet.  Dr. Jennifer Dunlap is a great vet, one of the most optimistic vets I’ve ever known and has the best bedside manners.  She answered my call and upon arrival decided that we should X-Ray the leg, just to be safe.  Unfortunately, her fears were correct, Seattle had a hairline fracture on the inside of her right femur. Dr. Dunlap quickly assured us that with proper care and rehab Seattle should make a full recovery.

Seattle took stall rest and rehab like a champ. She had handled the walking part of her rehab wonderfully and we had been approved to start trotting and slowly work towards the canter. Seattle was allowed to have limited turn out and she was happy to get to eat grass again.

We had been approved to start cantering, when it happened. I still can’t fully wrap my mind around the emotions I was feeling that day; anger, sadness, blame?  I was asleep when the barn owner called me as I was terribly sick.  They had found Seattle, outside her pasture, the gate and her left leg she said were “mangled”.  My heart dropped.  No one saw why she jumped out, whether to literally get to the grass on the other side, or to get to a buddy in the barn, maybe something spooked her and that’s why she jumped out? Whatever the reason was, Seattle, who was still on the road to recovery with her right leg, had shattered the back of her left knee and had major ligament damage.  The outlook was grim.

Immediately we thought of Donna Witt Preskitt, who is the owner and mastermind behind the success of the 5w Under Water Treadmill.  If there was a person in this world who could heal Seattle, it was her.  Donna had been referred to us by our trainer for a previous injury on one of our horses had.  Unfortunately, our Chief did not make a full recovery. His rehab time at the 5w Under Water Treadmill with Donna was cut short when the facility was hit by an F5 tornado that took everything but Donna, her staff, and the horses.

Our normally glass half full kind of vet informed us that she had sent Seattle’s X-rays to Rood and Riddle Equine, some of the best vets in the industry, and they confirmed her fears. Tragically, with all the damage Seattle had done, not just to her left knee, but also to her right femur,  her riding career was surely over. The most we could hope for was that she could bare enough weight to carry a baby; but they didn’t know Donna like we did.

Once Seattle’s leg had healed enough to travel, we shipped her to the 5w Underwater Treadmill Ranch and Donna happily received Seattle as part of her grand re-opening.  As soon as Seattle stepped off the trailer Donna started assessing her. She had me walk and trot Seattle, who to me looked perfectly sound. I was ecstatic, but Donna saw something. She knew we were not out of the woods yet and she was right.

Over the course of the year Seattle fought, overcoming setbacks that made everyone, including myself, give up on her- everyone except for Donna.  She told us “ Don’t  give up on Seattle, she has heart and Ashley, if she gives her heart to you, she will not fail you.” I wasn’t sure, I mean the mare had half of her hoof fall off due to lack of blood flow from overcompensating. Who can come back from all of that? But Seattle did. It was a long hard, trying year, but Seattle made it through.

When we went to pick her up, Donna had me hop on her and give her a light workout.  She wanted to see how she looked under saddle before she cleared her to leave.  This is the second and only other time a horse has given me goose bumps when I rode.

I could not believe it, I had my horse back, but her road to recovery didn’t end there. There were still a lot of questions she would have to answer.  Could she hold up to the concussion of jumping? Would she ever be able to jump the big jumps? It’s been a long road, Seattle forgot everything she had learned before the accident.  She had to re-learn how to jump, on top of that she was a spooky, hothead again. Luckily, this time I had some experience with it. There have been many people that have told me they did not think Seattle would be able to jump higher than 3 feet and when she did it with ease, they then told me that she wouldn’t be able to jump higher than 3’6. But, the mare just keeps jumping higher.  Seattle and I recently won the 1.15m jumpers at Fox Lea Farm, her second day competing at that height.  I think of Donna every time I ride Seattle, I can’t imagine what would have happened if we hadn’t met Donna and I am so thankful that we did. We are currently jumping 1.30m and are looking forward to the 2018 season. My mare just keeps jumping higher.

How to Train the Adult Amateur (and the kid of the...