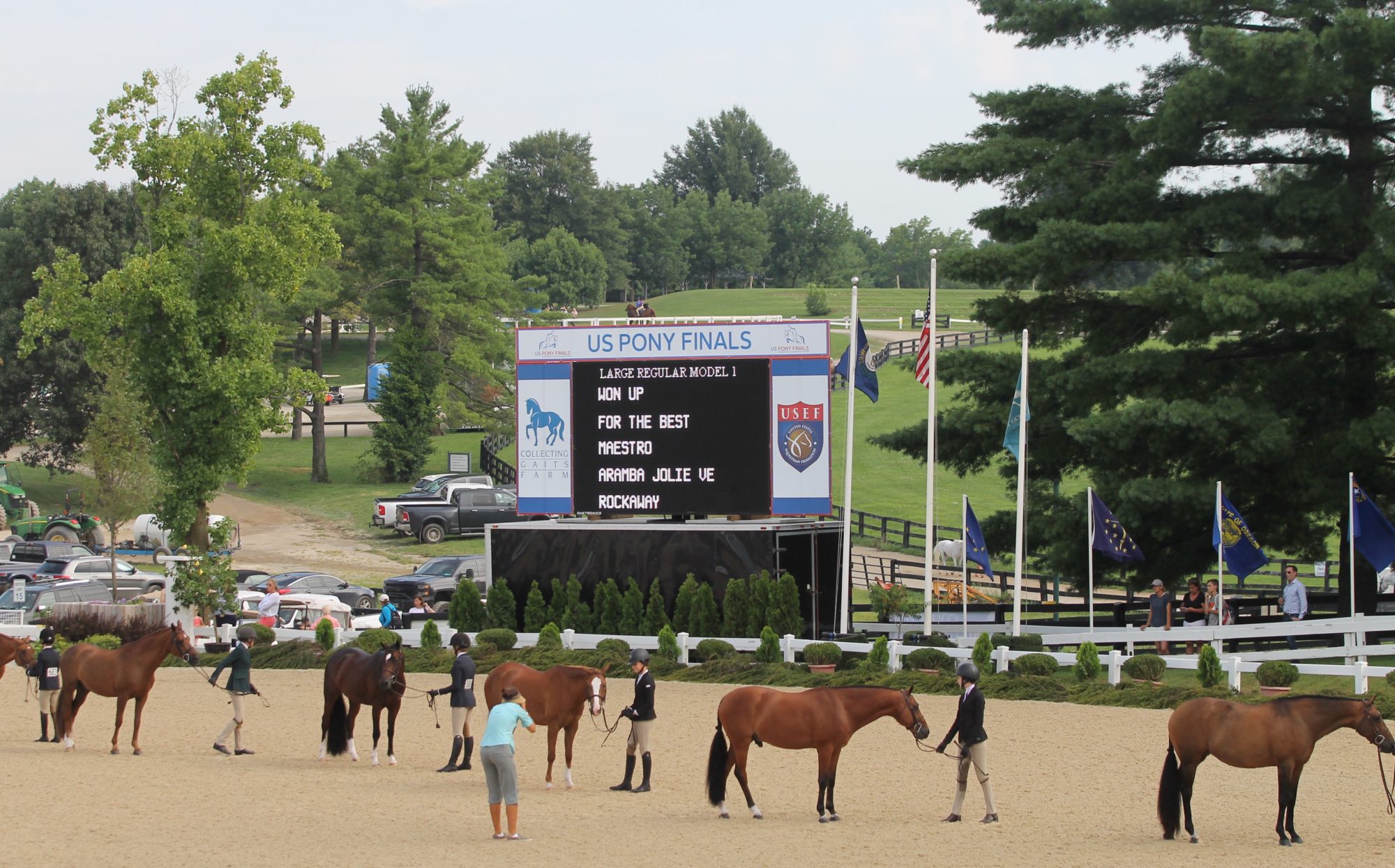 At many horse shows, a  class where the ring is filled with ponies shown in-hand by their riders is often seen before the first jumping class of each division. This is known as the pony model, commonly referred to as “the model” among competitors. More than fifty years old, the class originates from the time when the British challenged our country to an international riding competition.

The class can be seen at select horse shows across the country, including the prestigious Devon Horse Show and USEF Pony Finals. The animal with the least amount of conformation faults and physical blemishes with good presentation by the rider will earn the top position. It is always the first class of the division, meaning everyone has a clean slate upon entering the arena. Competitors form a single-file line while the judge weaves around the sea of ponies, carefully examining each animal while writing notes about what they see on their clipboard.

After the initial inspection, riders jog their ponies one at a time towards the other end of the arena past the judge, while he or she takes a look at their movement and soundness (making sure they are not physically hurt). Horse and rider then create a new line-up, the order based on the current standings of the class determined by the judge. Lastly, the judge takes a final glance, switches the orders of the riders if needed, and the results are finalized. Points earned through placing in the class are one-half of what they would be in a jumping or under saddle class, but they will give one the slightest edge when competing to win the division championship. “You’re trying to judge against what is in your mind and experience, the perfect pony,” says Christina Schlusemeyer, a seasoned judge and pony expert. “Things count off, like a short neck, a long back, an inverted topline, short pasterns, too-long pasterns.” Each conformation fault will deduct points off a pony’s final score. A beautiful animal with correct conformation will earn “plus-points,” as deemed by Schlusemeyer, with the judge.

In the jogging portion of the class, a pony should jog freely and move efficiently, demonstrating good balance. Having strong hindquarters is a must, as the animals should have the ability to “gather their hind end underneath them, which is their center of power. Everything comes from behind,” Schlusemeyer explains. Performing well in the model sets a pony up for success in the rest of its division not only because of the additional points given, but because a strong hind end, correct conformation, and excellent balance lead to exemplary performance in the over-fences classes. A muscled hind-end and correctly proportioned pasterns will help a pony jump well and move efficiently, using enough, but not too much energy to propel itself off the ground. A strong hind end correlates to power, and a pony with powerful hindquarters will have an easier time getting over the jumps and down the lines than one that lacks impulsion from behind.

The model offered at the annual USEF Pony Finals in Lexington, Kentucky is the most coveted model class in the country. Sometimes exceeding one hundred or more entries per class, each person hopes to place in the top twelve, eventually earning a ribbon in the top twenty overall in their respective division. While the correctness of a pony’s conformation and outward appearance are important during any model class, they are more valuable at USEF Pony Finals. The scores given count as twenty-five percent of one’s entire score, a considerably large chunk with each division consisting of only one jumping round, one under saddle, and one model. Ponies are judged in small groups of about twelve to fourteen in each one. In the sectioned classes, each pony is assessed thoroughly and given a fair score for its effort. “You have a short amount of period of time to assess the pony,” Schlusemeyer notes. With the large number of ponies to judge, she believes it is important that you “don’t miss any of the structural defects [of the animal],” necessitating a complete and careful assessment of a class of this caliber. However, no two scores given in the phase can be the same, like in any other model class. This is where half and quarter points come into play, ensuring that a tie between two ponies is unlikely. The combined model and under saddle scores determines the order of the jumping phase, making  a pony that places well in the model is especially important while competing at USEF Pony Finals.

While the conformation and aesthetic picture of the pony make up the two major components of any model class, the most correct pony showed by the most talented handler will claim first prize. A rider showing a flashy pony of quality will not place well if they cannot show their pony to its best potential. However, great showmanship is learned through time. Success will occur from years of competing in the model class and practicing its elements at home before a horse show. Learning how to handle the pony in a way that highlights its assets and best hides its faults is most important when competing in the model. The front legs should stand solid and square, while the hind legs are slightly split.

“The animal being alert is…important, learning how to make its head and neck come up and look long [is equally important],” Schlusemeyer clarifies. Its head and neck should be elongated slightly, with forward-facing ears and a pleasant expression, especially crucial when the judge comes over for assessment. If the pony becomes restless, walking in a small circle while the judge is away may keep it occupied. The velcro located on the wrist of a rider’s glove can be utilized in capturing the attention of an animal, along with crinkling a candy wrapper, softly shaking a tin of breath mints, and throwing a handful of arena sand into the air.

Although the model sets up horse and rider for excellence in their jumping rounds, it is not as popular as one might think on the A-circuit. Many venues do not offer this additional class for different reasons, but this is not necessarily a negative, as the model has its time and place. “The model is an important phase, [but] it does not need to be offered at every horse show,” Schlusemeyer comments. In some regions, ponies are far and few between, and the model is not necessary to include in the show’s prize list because of the division sizes. When breeding hunter ponies, the model encourages excellence because it gives pony breeders the incentive to pay close attention to quality while producing ponies that will place well in coveted classes all over the United States.

When a rider shows a pony with correct conformation and quality, that rider has a leg-up on the rest of their competition, earning extra points for their effort. Without the model, breeders would have less of a reason to produce high quality ponies for riders to show nationwide. The model fills an important role in the industry of our sport, encouraging people to offer beautiful animals in a class that rewards physical quality and proper conformation.

What Does Digital Accountability Mean?