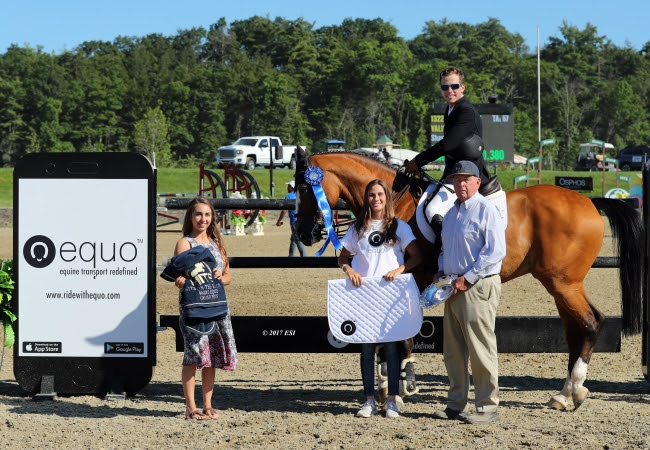 After 9 of 27 entries qualified for the Jump-Off with fault-free rides over the 16-effort, First-Round course which was designed by Mr. Florencio Hernandez from Mexico City, Mexico. Casady and VALINSKI S returned second in the order of go and jumped clear in the eight-effort tiebreaker, and set the mark to beat in a swift time of 40.380 seconds.

Of the nine riders who qualified for the Jump-Off, aside from VALINSKI S, only two others mastered the shortened course, fault-free, but could not catch Casady’s warp-speed. Laura Chapot and her longtime partner, QUOINTREAU UN PRINCE, succeeded with a clean round in a time of 41.682 seconds, for Second Place. And the last to go in the Jump-Off order was Debbie McCarthy Connor atop ZIM, who chose the ‘Clean and Slow’ route in a time of 50.721 seconds, which placed her Third. The remainder of the Jump-Off Challengers had four-faults or more, which dashed their chances for a piece of the top three placings.

Casady went seventh in the First-Round order, and he said it was a pretty wide-open course, with a lot of different options. “Valinski S jumped phenomenal, and really smooth,” remarked Casady. “You know I haven’t been riding him very long and it was one of our best rounds.”
Earlier this season, within two weeks of partnering, Casady and VALINSKI S claimed top honors in their debut performance – the $50,000 HORSEWARE Grand Prix at HITS-on-the-Hudson III.

Of the EQUO Jump-Off, Casady said, “Peter [Wylde] went ahead of me and fast, but had two down. So I went fast, tried to turn tighter and leave the jumps up. I just turned quick and ran and he [Valinski S] jumped with room to spare — when you have a horse like him to ride, you love every minute of it.”