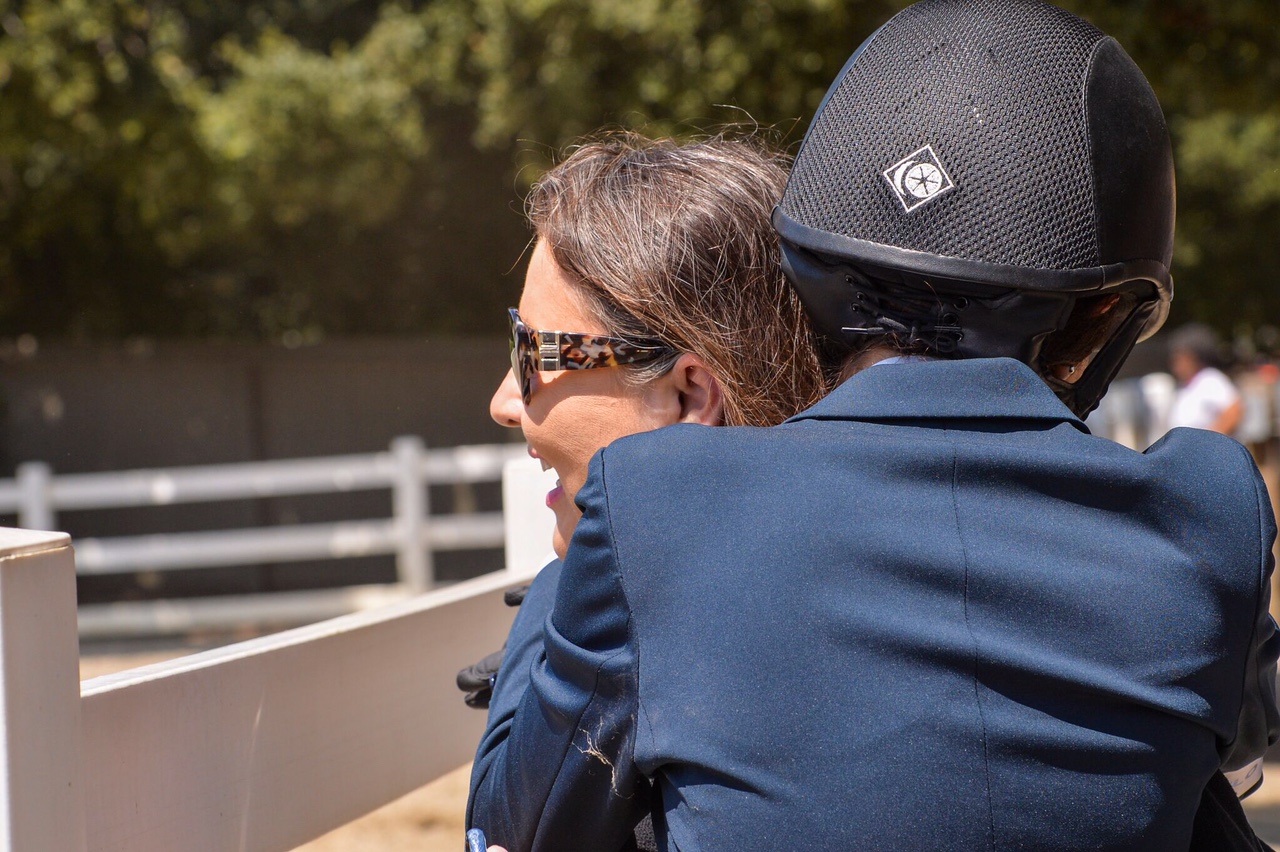 Last weekend was one of the greatest of my life.  I was named Best Adult Rider at the Menlo Charity Horse Show after winning Grand Adult Hunter Champion on Michelle Decker’s horse, Goodnight Moon.  Also, it was an incredible experience to watch USEF Network’s live feed as thirteen year old hunter rider prodigy Augusta Iwasaki piloted my pony, Butterscotch, to the Grand Green Pony Hunter Reserve Champion at Pony Finals.  On their own, either of these horse show experiences would have ranked amongst the best times in any aspect of my life.  And the reason they happened? Because of my mom.  ALL because of my mom.

My story is unlike most in the horse show world.  Born and raised in San Francisco, I didn’t grow up with a family that had any ‘horsey’ background at all.  I simply had friends who spoke of nothing but their weekly lessons at the local riding stable in Golden Gate Park and encouraged me to do the same.  After a tremendous amount of begging, my mother took me to my first lesson when I was eight years old.  There, we ran into the first roadblocks of many: I loved the idea of being a rider, but once I saw a horse in person, I was terrified.  Week after week, she faithfully took me to my lessons, even though most of the time, I refused to ride off the leadline.  After we’d leave the barn, she’d ask me the same question, “are you sure you want to keep doing this?” While other parents watched their children soon move on to jumping and competitions, my mom waited three years for me to canter.  She recognized that for whatever reason, this was the only thing I wanted to do and that as time went on, I only wanted it more and more.  As a non-rider, she had no reason to encourage me to stick with the sport.  Her passion was broadcasting and she was extremely talented in it; she received a contract with the ABC radio station in San Francisco when she was eighteen years old and worked as a news anchor and talk show host until she had my sister and me.

With every painstakingly slow step forward, she made me feel as if I had won an Olympic medal.  Those were almost always immediately accompanied by two steps back, where she patiently listened as I talked through the problem and helped me come to a solution.

She bought me every horse-related and sports psychology book she could find and ate cookies with me while we watched equestrian videos every night after dinner, studying the qualities of top riders and learning different aspects of horse care together.  She never made me feel like it was a waste of time, even though to do this day, I wonder how she had the patience to stick with me.

As months turned to years, I finally started to hit some milestones and as my goals got bigger, my mom helped me without handing it to me.  When I was interested in a horse that was advertised for sale or wanted to sign up for a clinic, she made me make the phone call to inquire.  I was painfully shy as a child and this forced me to get out of my shell.  I remember being so uncomfortable calling people that I respected in the industry, but with each cold call I made, it became easier and easier.  She drove hours to the barn every day so I could ride seven days a week, but she had two conditions – the horse wouldn’t be in full training and I wouldn’t have help grooming.  I remember being physically exhausted every time we left the barn, especially once I was looking after seven of our horses, but I formed a deep bond with the animals because of how much time I spent with them.  That increased level of trust meant that I had more confidence in them, which allowed me to believe in our bond when we were at shows. When I decided I wanted to compete more frequently at a higher level, she said I would need to figure out how to financially make it work.  She helped me with the purchase price of my first project pony and trusted me to make the decisions that would allow it to be profitable.  At the time, I remember feeling jealous of the girls who seemed to have it all – expensive horses that were blue ribbon machines and the ability to compete at every horse show.  Looking back, I was damn lucky that I didn’t.  I learned to have a good work ethic, patience, determination, and a much deeper sense of appreciation for how lucky any of us are to show these amazing creatures.  And I had one hell of a mom to believe in my ability when no one else did. I didn’t have a banner junior career and it culminated in disappointment and tears as I made a last ditch attempt to compete in the big eq as a seventeen year old.  My 3’6” medal dreams didn’t pan out, but I am forever thankful to my mom for allowing me to give them a shot.  I often think of the memories I have with her from that year, once driving from San Diego to Los Angeles to compete in the Maclay in two cities in the same day on the last week to qualify.  She assured me that there was life after aging out and was right, as I didn’t experience much success until my equitation horse, L. Alta Vida, came into my life when I was twenty-one.  He led me to multiple medal finals wins, year-end championships, my first trip to Indoors, a win at Capital Challenge, a feature article in The Plaid Horse…all of which were felt that much more special to me because I got to share them with her.

When I was younger, I shrugged off the phrase ‘it’s about the journey, not the destination’.  But it is so, so true – the moments of victory are fleeting but the memories you make to get there are what makes it so special. My mom is the most devoted person I know, still accompanying me to the barn each day and to nearly every horse show and I look forward to that time together now more than I ever have.  She is still my number one fan, my best friend, and now, my business partner as we own a string of investment horses and ponies together.  The  world of horses is filled with the highest of highs and the lowest of lows, celebrations and grieving, excitements to let downs, all within the course of the weekend, and she handles the good and the bad with the grace and good sportsmanship.  Her ability to put in all in perspective, keep a positive attitude, and be an expert at problem solving is a perfect balance to my personality.  I was the furthest thing from an overnight success – it has been a painfully slow road at times, but to have Menlo and Pony Finals end so well this year was the culmination of her time, effort, and belief in me and our horses.  It took nine years at Menlo to win a championship and eighteen years for us to get a pony to Pony Finals, so we are both still pinching ourselves that it actually happened!  I can’t wait to make more great memories with her and see what else we can accomplish together.  There are two truths in this life that I know for sure: there’s nothing that grooming the ponies together won’t fix and there’s no better person in the world than my mom.  Thanks for believing in the little girl who wouldn’t ride off the leadline.