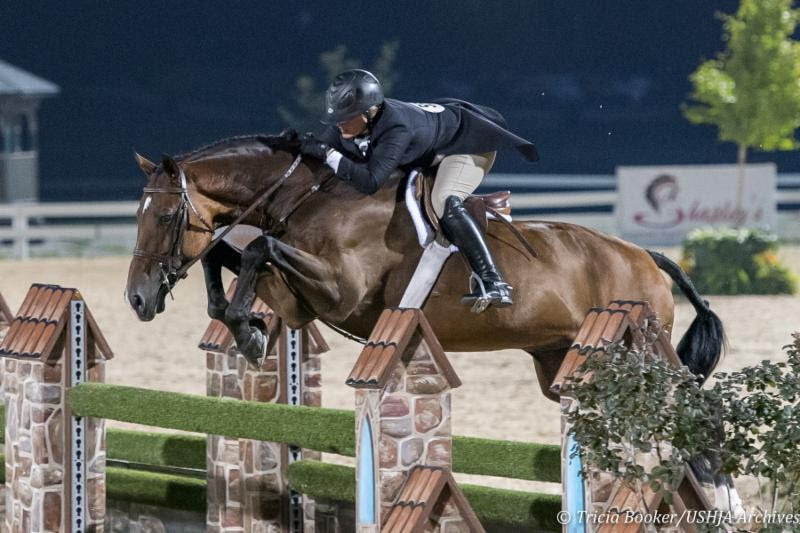 Lexington, Ky. —– Aug. 19, 2017 — –When Victoria Colvin stepped into the ring for the Handy Round of the USHJA International Hunter Derby Championship, she had her plan mapped out —– although her strategy may have been a bit different than most riders.

“I did walk the course! I was out there for 10 minutes and took a glance,” she said with a laugh, after admitting she hadn’t walked the previous day’s Classic Hunter Round. “If I don’t overthink and just do it, it’s better.”

But when leader John French and Skyhawk pulled a block on a wall in the in-and-out, it was the Ingram family’s 10-year-old, bay warmblood that led the victory gallop and earned the championship title and top check of $46,352.72, including a $1,000 rider bonus, donated by Ron Danta and Danny Robertshaw.And Colvin did just that: with scores of 88.75, 88.25 and 92 (with all four high options and handy bonus points of 10, 9 and 10), she guided John and Stephanie Ingram LLC’s Cuba to the head of the class with 584.25 points and just one rider remaining.

“It’s amazing. He was fantastic, and I couldn’t have asked him to go any better,” said 19-year-old Colvin, of Loxahatchee, Florida. “I’ve been doing this class for many years, so it was wonderful to be able to win it once.”

Geoffrey Hesslink, 21, of Katonah, New York, rode his own Cadoretto, a 6-year-old Oldenburg (Cador —– Caletta), to a remarkable second-placed finish in their Derby Championship debut. The pair placed fourth in the Classic Round and moved up with a tidy and smooth Handy Round that earned scores of 90, 88.5 and 87 (with all four high options and handy bonus points of 8, 8 and 8) for 574.50 points.

Unlike Colvin, third-placed Amanda Steege, 42, of Ashmeadow Farm in Califon, New Jersey, spent ample time walking the Handy Hunter course and studying the rides before she went.”I’m extremely happy. I came here with low expectations but with goals, and this was amazing,” said the young professional who works with trainer Andre Dignelli at Heritage Farm. “I’m over the moon that my horse was that good.”

“I learned that I wanted to ride with pace,” she said. “Some of the early rounds I saw they didn’t necessarily make any mistakes, but it looked like the judges wanted you to show off a little more pace. So, that was my plan when I went. I was in 12th after the first round, so it was easy for me to take a shot as opposed to when you’re coming back high up there.”

The competition in the Rolex Stadium at the Kentucky Horse Park featured a beautiful Handy Hunter course designed by Alan Lohman and Danny Moore. The creative fences, supplied by Fuzzy Mayo and CCI Jump, included decorations reminiscent of a beautiful hunt field with lush trees and colorful flowers in full bloom.”I still can’t believe it! He went out there like he owned the place, and it was an amazing feeling,” said Steege. “These guys have had really illustrious junior careers and have gotten to be in these big events and these spotlight situations, and I didn’t have that experience as a junior. I’ve worked really hard to control my nerves, and I’ve been really lucky to have people to support me and believe in me. Maybe Tori doesn’t need to walk the course, but I walk the course 20 times! It’s a different experience for me, but I’m feeling more and more confident.”

The overall feeling of the course was to simulate cantering through hunt country, with natural jumps of planks and logs. The fence heights ranged from 3’6″ to 4′ and offered riders an opportunity to pick up bonus points by taking any one or all of the four option fences.

The 12-obstacle course featured several areas where riders could show off their handiness with tight turns and rollbacks. Four high options were offered at 4’3″ and 4’6″ in addition to a trot fence at fence 7.

The Handy Hunter scoring included three components. Each judging panel gave their base score for each horse-and-rider combination based on accepted handy hunter judging principles. Then, each panel gave a High Option Bonus Score (the number of higher fences jumped) followed by the Handy Bonus score. The Handy Bonus Score consists of between 0-10 points based on each judging panel’s opinion of how handily the round was ridden, such as brilliance, pace and tighter turns.

For Colvin’s performance, she received the Beaver River Farm Perpetual Trophy along with a custom CWD saddle as the winning rider, and Cuba was awarded the Wrenwood Farm Trophy and a TheraPlate Equine Unit as the winning horse for the Ingram family.

Hesslink’s second-placed Section A title was just one of many awards he received as he also earned the Section B Overall title, the Rider Bonus awarded by Ron Danta and Danny Robertshaw, and the First Time Rider Award, presented by Perfect Products. In total, Hesslink earned $42,003.21 in prize money and bonus awards.

Heritage Farm’s Charisma and Taylor St. Jacques were presented with this year’s Shapley’s Best Turned Out Award. Sally Stith-Burdette was on hand to present Charisma’s groom with a Shapley’s Awards Package.

Peter Pletcher received this year’s Rider Style Award. The award, presented by Bill Rube, went to the rider who best displayed the American style of riding in the ring and sportsmanship outside of the competition arena. The recipient will serve as a role model for preserving the integrity of the sport and maintaining a standard of excellence and tradition in his or her riding.

Timothy Maddrix will now return home with a blue ribbon and check for $3,000 after claiming first aboard Wimberly DeBono’s Indecision.

The evening also featured an emotional retirement ceremony for SBS Farms’ Jersey Boy, the 2012 USHJA International Hunter Derby Champion who has won the most prize money in Derby history with more than $297,800 in earnings.

Since 2008, the USHJA International Hunter Derby Program has paid out more than $10.75 million. This year 232 horses were enrolled in the program from 32 states and Canada.

A special thanks to Kentucky Horse Shows LLC for their outstanding management of the USHJA Championship Week.

For full coverage please look for the September print issue of USHJA In Stride. For additional information about the Championship and complete results, click here.