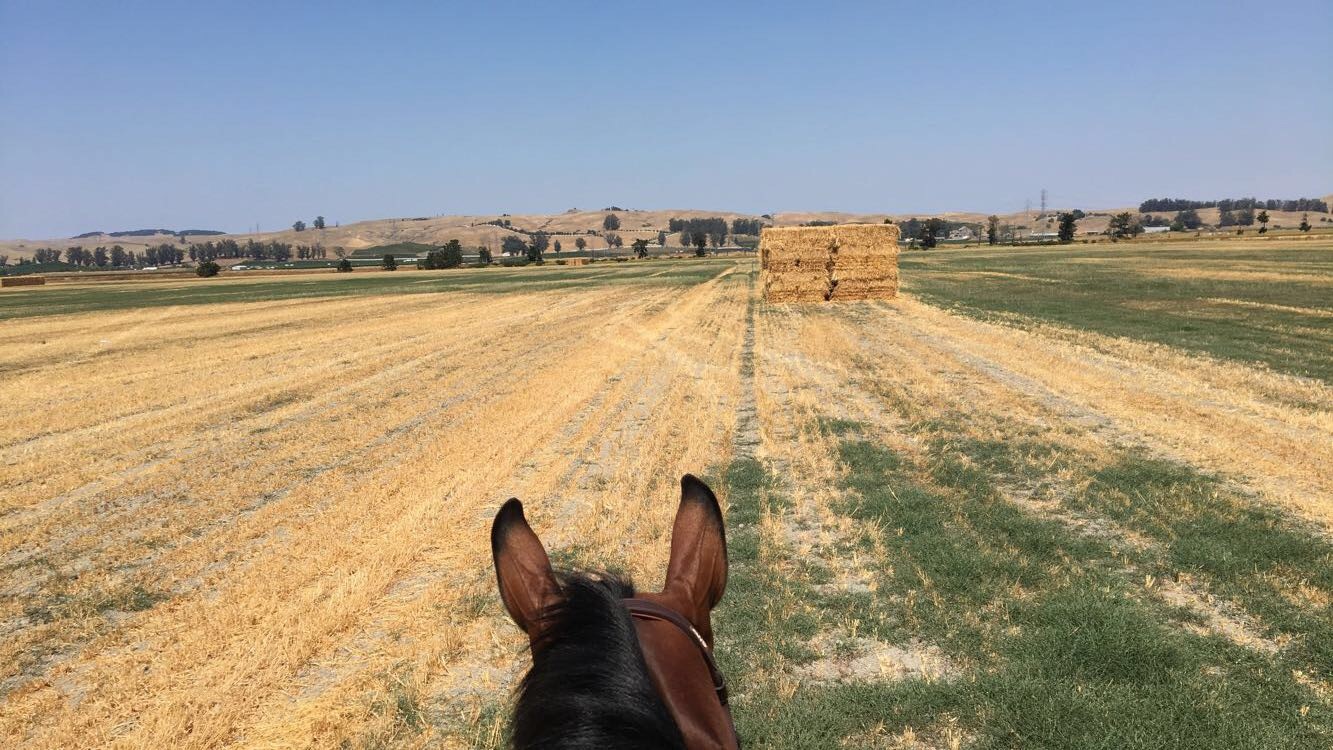 While vacationing in Colorado, my family friend, Jenny Iverson, called my mother and me regarding an experience to travel up to Petaluma, CA to be Kristin Hardin’s working student while she and her show team competed at the Sonoma Horse Park (SHP) for two weeks. Excited for the potential learning opportunity to watch and ride with Kristin Hardin Stables’ (KHS) team, I packed my car and drove 500 miles to an experience that I am incredibly lucky to have received.

Arriving at SHP on Monday morning of the first week of the show Equestrian Classic I, I found myself timid and somewhat doubtful of my abilities in comparison to the level of competition and talent to be found in Northern California and at KHS. Hardin is known for her individual style, in not only her clothing, but how she runs her stables. Monday morning consisted of setting up grooming stalls and the horses’ stalls while trying to learn the routine of Kristin’s barn. Once horses came off the trailer, I met the KHS team, horses, and riders. Kristin brought a group of nine horses, two of her children’s, Zacko and Tyler, four of her own, and two of her client’s, Alexandra Ireland.

Everyday at SHP was a new learning opportunity and experience that whirled by full of smiles, ribbons and new techniques. Each 5:00 a.m. alarm clock tone, stall cleaning, course walk, math problem and a meal eaten out of a to-go box changed my perspective on what a horse show really is. Sonoma Horse Park is gorgeous and can be trailed on horseback in about 20 minutes from the furthest hunter areas to the trailer and RV parking, a trip that Kristin’s son, Zacko, and I took each day. It turned out to be a mental break for myself and an opportunity for him to sing Taylor Swift songs and eat popsicles while walking around saying good morning to the horse show spectators and competitors. It would be a lie to say each day we spent countless hours in the VIP tent eating fully catered meals waiting for Jerry Campos, Kristin’s groom, to have each horse perfectly polished and ready to ride at the ring ten minutes early. Even though we did get breakfast and lunch from VIP  in between rides, the majority of our time was going between rings and taking care of the horses.

A typical morning consisted of helping Jerry clean stalls, give water and hay, sweep and rake the aisle, and be the first annoying person at the back gate signing in for each competitor’s rounds. With coffee in my hand by about 7:00 a.m. I would be greeted by Zacko and his endless amount of energy ready to ride each day. Each barn operates differently in the staff and client interaction, but Kristin Hardin Stables (KHS) is nothing but a big barn family that welcomed me extremely warmly. Outside of riding and stable work I was able to help both Zacko and Tyler with their school work which helped us bond as a team.  Kristin may seem tough and scary if you do not get to know her outside of a subtle hello at the warm up ring, but her philosophy as a horseman and trainer paired with her down-to-earth teaching style helped me to gain even more respect for her as a person.

Her philosophy is a simplistic approach.If the horses are happy they will perform to the fullest of their ability. This approach means nothing unnecessary or extra for the horses that they do not absolutely need to function, and it truly works as I have witnessed. Every KHS eats the same thing with the exception of some also have a Platinum pack or bar, but that is all. After being ridden or shown, horses are rinsed off or bathed and placed back in their clean stall to relax instead of waiting in the cross ties to dry. Each of these simple things made the horses happy which you could feel when riding or just spending time with them.

The first week of showing was a learning experience for everyone in our barn- both in and out of the saddle. Alexandra Ireland and Tyler set the goals to trust themselves and their mounts more in the show ring, while Zacko began working on sitting in his turns more, and I learned from both. Kristin had successful rounds placing fifth on Tennessee Rouge, ninth on Firestone S and having an unfortunate rail on Bert in the Welcome Prix on Thursday night. The Grand Prix took place Saturday night, in which Firestone S finished fifth. Being able to groom for a show, especially for a Prix, is an indescribable feeling as a working student. The information that I was able to absorb in the ten minutes Kristin sat on each horse is something that I could have never been taught. Every night that she competed in a Prix, she left the barn after a long day with a smile on her face and a positive attitude that everyone wants to see in a trainer- no matter the outcome of the day’s events.

The first week I spent at SHP concluded with my very own birthday celebration which the KHS team made special with cupcakes. Going into the Giant Steps Charity Classic Horse Show, the KHS head groom resigned. This was a huge curveball. I went from worrying about three horses on my own to being a part of our team of five people taking care of nine horses each day, on top of riding and showing one of Alex’s that week. This meant 14 to 16 hour days constantly checking horses water buckets and making sure stalls were clean so there was less work to do at the end of the day. But, we managed to work as a team and pull it off. Kristin spent her mornings cleaning Bert and Firestones’ stalls instead of having breakfast or trying to sleep in. But, it truly paid off for the whole team by the end of the week. Zacko was dual champion in the .80 and .85 meter divisions- winning every class he entered. The whole team at KHS was extremely proud. Tyler and Alex each won a 1.10-meter class and were both Reserve Champion in their respected divisions. Kristin, between running the behind the scenes and riding, was second and fifth in the Grand Prix with fantastic rounds on each horse. I had not shown since October so I was pretty rusty, but did the best I could and had a ton of fun.

At the end of the day, I learned more than I could have asked for and gained a group of people who will support me forever. I am endlessly grateful for that.

The Best Places To Go Horseback Riding in the US