Home Blogs Holy Smokes: The Mighty Mustang That Could 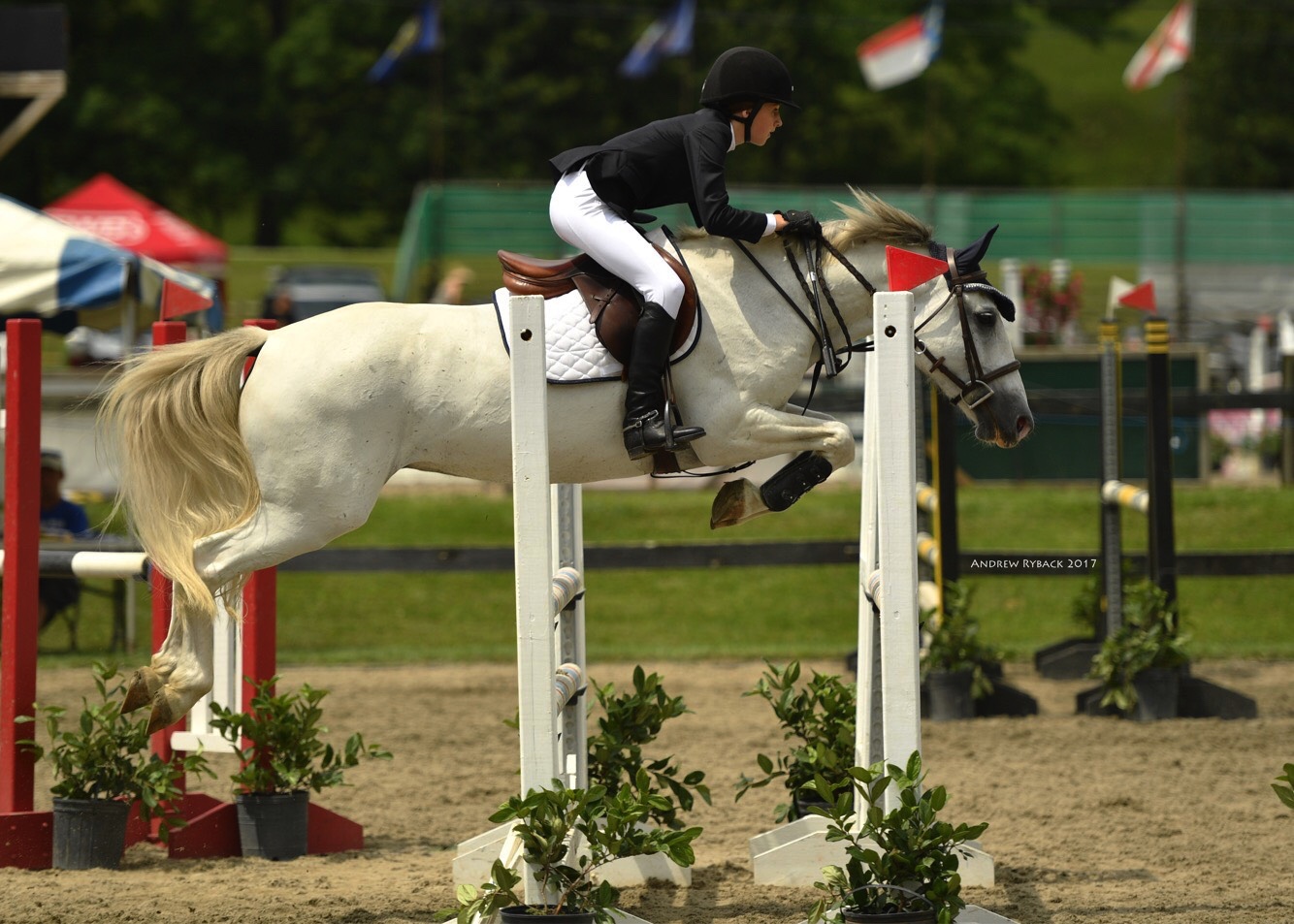 To compete successfully in the jumper divisions, a horse should be quick on its feet to make the time allowed, scopey enough to leave the ground from any distance, and have enough power and impulsion from behind to propel themselves over tall, wide obstacles. Popular breeds of jumper horses include the Selle Francais, Belgian Warmblood, and Hanoverian. So in the wide world of jumper horses, where does the American mustang fit into the picture? Originally brought to the United States by the Spanish many centuries ago, these small horses have played a significant role in the American culture for hundreds of years. However, they are not popular on the show circuit, and are often overlooked or killed due to overpopulation. When given a chance to thrive, good care and training, the Mustang can become a force to reckon with,  just like any other breed of horse.

Holy Smokes, known as “Smokey,” is a nine year old gray Mustang pony gelding piloted by Remy McDonough from Pennsylvania. They compete in the Low Children’s Jumpers, soaring over obstacles around 3’3” in height. For two years, this incredible pair has collected top ribbons across the east coast, most recently claiming third and sixth place out of a field of sixty competitors at the Vermont Summer Festival, with Smokey as only pony entered in the classes. So how did this unstoppable pair come to be? The journey was not clear-cut, as horse and rider did not find each other right away. Smokey was first spotted barrel racing at a rodeo in Ocala, Florida by McDonough’s trainer,who then purchased him and brought him home. At the time, McDonough had been riding lesson horses and was ready to progress into the higher levels of riding, especially jumping. Her trainer suggested that she try Smokey for her future mount because of his affinity for jumping.

McDonough soon after fell in love because of his sweet, willing attitude and big heart. “My family was hesitant, but there was a connection right away,” McDonough explains. “He is so willing and he loves to jump- the higher the better!” She describes Smokey’s ride as extremely smooth, “He barely needs any leg, only as a guide to the jump.” She also notes there has never been a horse show where they have not earned a ribbon, an accomplishment in itself. “Smokey gives his all every time, he is a mighty little Mustang. I know that he takes care of me as well as I take care of him,” she remarks, a trait useful in an animal in order for horse and rider to have clean, fast, and efficient rounds in the jumper classes. While Smokey and McDonough have proven to be fierce competitors at the 3’3” level, McDonough has the desire to move up in the ranks with her trusty Mustang. She says that her upcoming coal is “to move up in classes to the 3’6” jumpers.” While doing so, she wishes to show the world “what a Mustang can do!” as they are not often seen on the show circuit. Competing successfully at the 3’6” (Children’s Jumper) height is no easy feat, let alone with a pony. Contrary to some beliefs, McDonough believes ponies can place just as well as horses in these tough classes. “My advice to others competing with ponies in the jumpers is to sit back and take tight turns. Ponies can place against horses without looking reckless, you just have to outsmart [the horses].” Ponies can often take a more efficient track to each obstacle than horses because of their small size. Smokey and McDonough ride equally as efficient as their larger competition, and have the ribbons to prove it.

On McDonough’s winning experience at the Vermont Summer Festival, she notes “Our biggest accomplishment … [was] just getting there. The show world isn’t used to seeing Mustangs in the ring. Many times we have gotten laughed at, but… when they see what Smokey can do, they are amazed.” McDonough is raising awareness for Mustangs everywhere by proving they can be great show animals for any level of riding. Their small size makes them ideal for younger, smaller riders wanting to have a great experience jumping a pony that suits their height. Mustangs’ willing attitudes help them go far in their careers. Look for this dynamic duo on the east coast for years to come winning tricolors and possibly attending the Pony Jumper Championship at USEF Pony Finals, all while capturing the hearts and attention of many along the way.