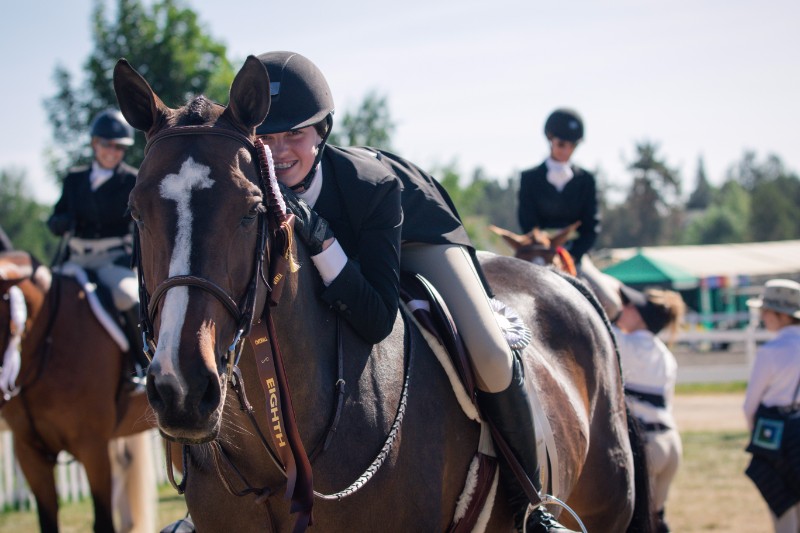 Kennedy Duke is a thirteen year old from Lake Oswego, Oregon. She competes up and down the West Coast, competing in the 3’3” Junior Hunters.  Most recently Kennedy competed in her first USHJA International Derby, placing eighth out of a competitive field of 18. Duke is a native of the Pacific Northwest, starting her love of horses off early, “I’ve loved horses since the day I was born.” For Kennedy, horses are somewhat of a family affair. “My mom rode when she had me and my sister, so she would take us out to the barn and let us pet the horses. I instantly fell in love with the sport, and we got our first pony when I was seven.” Duke loves sharing the love of horses with her family, as her younger sister also rides, “ I love supporting my sister and watching her become a better rider.” Duke speaks fondly of her family’s involvement in the sport, “It’s so much fun having people in the family that enjoy the sport as much as I do. My mom is always there for us when we need her, and she’s always there to cheer us on – I’m so grateful for her.” Having only moved up to the Junior Hunters at the beginning of this year, Duke was ecstatic to have qualified for the 2017 West Coast Junior Hunter Finals. “When I got the letter that I had qualified for Junior Hunter Finals, I was thrilled! I couldn’t believe that we’d done it. I was so proud of my mare.”  A last minute decision had her heading down to Del Mar, California to compete in the finals. “I began counting down every day until the day we left.”  Duke rode her mare Moonstruck, affectionately known as Luna in the barn. Luna, a 12 year old Holsteiner by Cassini II, brought Kennedy up from the Short Stirrup Hunter to the Junior Hunter divisions. “Junior Hunter Finals was the most incredible experience,” Duke says, thinking of her time there. “I will always remember each and every moment. I had so much fun and learned a lot. It was an amazing experience.” The pair earned eighth place overall in the Large 3’3” Junior Hunters out of a competitive group of 33.

After a successful go at Junior Hunter Finals, the pair came back up to Oregon to show at the Oregon High Desert Classic, where Duke learned she and Luna would be competing in the $10,000 USHJA International Hunter Derby. “When my trainer told me I’d be doing the International Derby at the Oregon High Desert Classic II, I started jumping up and down. I didn’t sleep at all that night because I was too excited! It was my first 3’6” class, and I couldn’t wait” The first round consisted of a flowing classic course. “The first course was so much fun,” says Duke of the classic course. “I went in hoping just to get around, but so much more was achieved. I hugged her neck coming out of the ring when I heard my scores.” Scoring a 75 and 80, the combined total of 155 put Duke into the eighth spot returning back for the handy course. “The handy course was so exciting. Cantering straight  away from the gate to my first jump, there was so much adrenaline!”  The pair put in a solid round in the handy to score a 78 and 86, which put them into ninth place for the handy round. Duke’s solid rides and Luna’s consistent jump allowed them to place eighth overall and became the highest scoring junior in the derby. “I was in awe that I had finished eighth overall in my first International Hunter Derby.”

Kennedy’s next steps include a possible move up the the 3’6”. “I want to keep growing stronger in the 3’3” and possibly move up to the 3’6” Junior Hunters at some point. I want to keep doing the National Derbies, and hopefully play around in the bigger derbies as well! I’m so proud of how far Luna and I have come, and I can’t wait to see what’s ahead.”

Just talking to her, Kennedy is so genuine — one can see that her whole heart belongs to the sport and to the horses involved. The Plaid Horse wishes her the best of luck in the future!