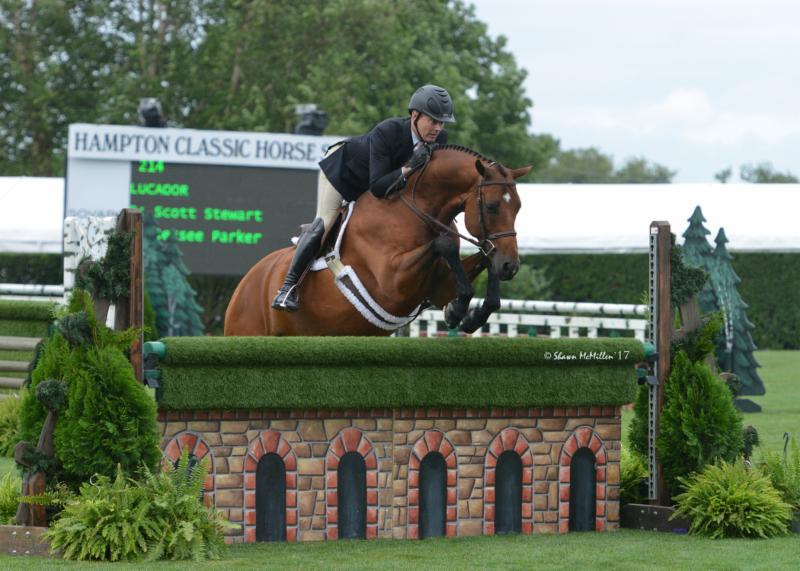 Above photo: Scott Stewart piloted Dr. Betsee Parker’s Lucador to the championship in the High Performance Hunter 3’9″ division at the Hampton Classic. © Shawn McMillen Photography
PRESS RELEASE
Bridgehampton, NY – August 30, 2017 –
Scott Stewart has a long history of success at the Hampton Classic, and Wednesday saw another row of champion rosettes added to his collection.
Victorious in four major divisions just as he was in 2016, Stewart has every reason to look forward to attending the Hampton Classic each August.
Stewart won the championship in the High Performance Hunter 3’9″ division with Lucador, owned by Dr. Betsee Parker. Reserve went to Koala, ridden by Victoria Colvin and owned by John & Stephanie Ingram.
Following the presentation ceremony, Stewart reviewed Lucador’s performances leading to the overall title:
“He went great, he won every class except for one, in which he was third. I’m really pleased with his performances, especially after all the rain last night. The footing today was actually even better than it was yesterday. This is the only time in the season we show in a grass ring, so it’s a little different and it’s something we have to practice for at home. When you have a good horse and the conditions are nice as they are here, they probably jump their best of the year at this show. It’s one of the nicest to come to.”
Jennifer Hannan of Wakefield, RI, piloted Patricia Fulchino’s Best Regards to the championship in the Green Conformation hunters.
Said Hannan: “We’ve shown at the Hamptons many times but this is my first time being champion. Today he went just beautifully. The weather was a little windy and I think he handled the circumstances really well. He jumped a ’10’ and was really cooperative. I couldn’t be happier.”
While hunter competitions continue through Sunday, a number of divisions have awarded champion and reserve champion to this point:
Green Hunter 3’6″ CH: Wonderly RES: Luster both ridden by Scott Stewart and owned by Dr. Betsee Parker
Green Hunter 3’9″ CH: William Hill ridden by Scott Stewart, owned by Gotchman Sport Horse LLC RES: Early August ridden by Patricia Griffith, owned by Deer Ridge Farms
Green Conformation Hunter CH: Best Regards ridden by Jennifer Hannan, owned by Patricia Fulchino RES: Private Life ridden by Scott Stewart, owned by Dr. Betsee Parker
High Performance Hunter 3’9″ CH: Lucador ridden by Scott Stewart, owned by Dr. Betsee Parker RES: Koala ridden by Victoria Colvin, owned by John and Stephanie Ingram
High Performance Hunter 4′ CH: Catch Me ridden by Scott Stewart, owned by Gotchman Sport Horse LLC RES:
Children’s Hunter Horse 15-17 CH: Lovestruck ridden by Sophia Soja, owned by Kelly Stensland RES: Cabaret owned and ridden by Isabel Culver
Children’s Hunter Small/Medium Pony CH: Enchanted ridden by Caroline Cole, owned by First Blue LLC RES: Rosmel’s Stellar ridden by Ryley Kurau, owned by Ava Girdusky
Update on the $30,000 Longines Rider Challenge:
Richie Moloney of Ireland maintains the lead in the $30,000 Longines Rider Challenge with a total of 163.5 points. Brianne Goutal of USA is second with 110 points, and McLain Ward has taken over the third position with 99 points. The Challenge continues throughout the week, and will be awarded Sunday.
Thursday’s competition continues with open jumpers in the grand prix ring including the Rose Hill Farm Amateur-Owner Jumpers and the highlight of the afternoon, the $40,000 SOVARO® Speed Stake.
Hunters will continue in the Anne Aspinall ring with Junior hunters followed by the $2,500 Adult Amateur Hunter Classic, presented by Firefly.
Running through September 3, the Classic will feature over 200 classes in six beautifully manicured show rings; a Boutique Garden with more than 70 vendors for shopping, and a wide selection of dining options on the world-class 60-acre showground.
The Hampton Classic is one of the most spectacular equestrian events in the nation and showcases the highest levels of hunter-jumper competition. The world-class event hosts hundreds of top riders and horses from all over the nation and world.
For those who can’t make it to the show grounds, complimentary live webcasts of all Grand Prix ring competitions air on the Hampton Classic website, produced by ShowNet.  Most of the Classic’s other classes are also available on ShowNet.biz. In addition, WVVH-TV, the official Long Island television station of the Hampton Classic, broadcasts up to five hours of competition and highlights each day during the Classic.  These broadcasts can also be seen on line at www.wvvh.tv.
For complete horse show results and more information on the Hampton Classic Horse Show, please visit the Hampton Classic website at www.hamptonclassic.com or call (631) 537-3177. Hampton Classic Horse Show, Inc. is a 501(c)(3) charitable corporation.