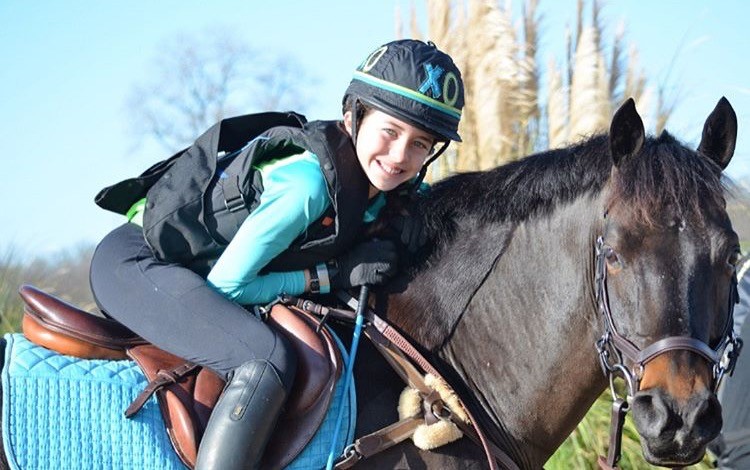 Above photo: Ryleigh and Nick after competing Cross Country

Ryleigh Ferrier is already a success in the cutting world. Only having been in a western saddle for a little less than six months, she and her new mount, Ichi City Limits, won the Youth Junior Championships at the Denver National 2017.

Ferrier, 13, rode hunters ands jumper for many years. Aboard a saintly chestnut pony named Finley, she received numerous year- end awards like NTHJA Short Stirrup High Point Rider. Soon after receiving the award, Ryleigh switched disciplines to eventing, keeping her horse, Finley. The pair won countless championships. She then purchased another eventing pony, Raynyday Final Salute, and had major success with “Nick” as well. But after a hard fall on the cross country resulted in breaking part of her neck, she knew it was time to try another discipline.

Ryleigh went and watched a cutting show in Fort Worth, Texas, during the futurity and the summer spectacular. She remembers, “I thought it was the most boring and stupid thing I had ever seen… but that was way before I had ever even sat on a cutting horse and actually enjoyed the ride.” When asked if Nick taught her anything important for cutting, she replied, “He taught me more that I can apply to the cutters including things like my seat so, when I am in the show ring and something’s gets a little fast, I’m not being flung around quite as much.”

At last, Ryleigh made the final decision to cut. She bought her current horse, Ichi City Limits and found trainer, Teryn Muench. She attended her first show and won her class. The success continued for the next six months, qualifying her for Denver Nationals. As any equestrian would in their first national championship, Ferrier “felt very nervous. I told my self that I didn’t matter how well I did. I knew Wyatt would perform great for me and that God has a plan for everything, so honestly I was nervous and not nervous.

I walked in that pen feeling amazing and Wyatt felt SO good ,so nothing to worry about. I started cutting my first cow and things were going just as planned, and I used every technique I had been given to start with. My turn back help really came in handy, too, as [the coaches] talked me through the whole run. They kept me from making any last minute stupid decisions. I cut all three of my cows and didn’t think the least of winning or anything even close to that.  So, I cooled him off and took him in. The funniest part was when I was cooling him off and bathing him, and the judges called my name to come to the show pen. I was so ecstatic and surprised that I could nearly taste it! I will never forget that day!”

Congratulations Ms. Ferrier and Ichi City Limits on your success in the cutting community. We wish you the best of luck in the future as you chase your dreams!