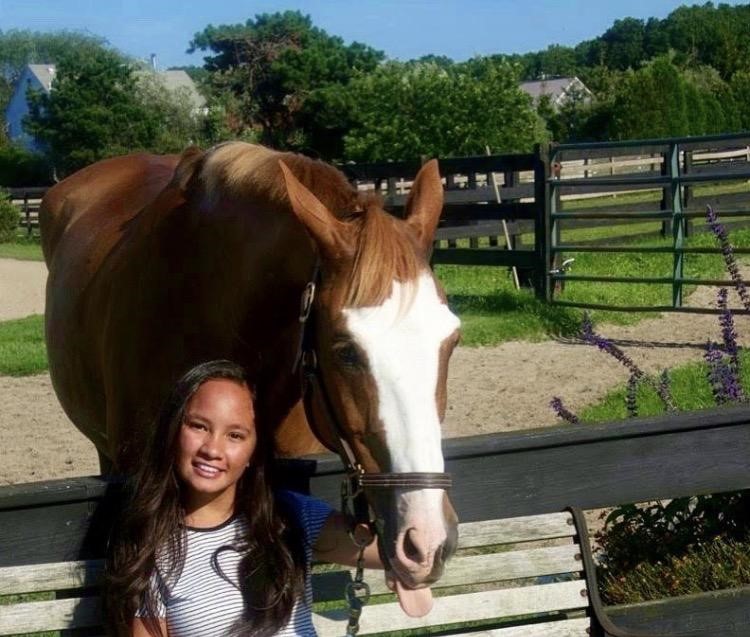 Above photo: Lauren enjoying the sun with Ollie (aka Opportunity Knocks). Photo by Corinne McNeely Photography.

Lauren Reischer started horseback riding at the age of 3 through a therapeutic riding program. She began riding as therapy to help with her mobility which was limited due to  Cerebral Palsy. Lauren’s brain recognized her legs as one unit rather than two different limbs. She described it as, “almost like having a mermaid tail”. This caused stiffness in the right side of her body, including her right arm and hand. Her lower body was not yet flexible enough for her to separate her legs without help, nor strong enough for her to stand on her own. At that time, she was participating in over 25 hours a week of both physical and occupational therapy and was making slow progress.

Her first riding lesson was on a massive 19 hand Palomino Belgian Draft horse named Volton, whose head let alone was almost larger than she was! Lauren explained her experience to me highlighting her fondest memory,“Volton came right over to where I was sitting, put his head in my arms and was licking my legs like he wanted me to feel better.” When the time came for Lauren to mount Volton, her dad was nervous to see what would happen when they placed her in the saddle. When he picked Lauren up to put her on, for some completely unexplainable reason, she was able to separate her legs on her own and sit upright in the saddle. It was the first time she had ever done anything like that by herself.

This activity not only increased her physical strength and plasticity, but immediately boosted her self-confidence. Lauren depicted the emotion connected with riding as “a breath of fresh air.” She was one of the only disabled kids she knew, so sometimes it was hard for Lauren to relate and connect with the other kids at school. That left her feeling invisible or powerless at times.  But, she also felt like her and Volton were really clicking, and for the first time, Lauren felt simultaneously free and in-control. Although this experience was all very positive, riding was not easy for her the first few times around,  Even though Lauren’s Cerebral Palsy was mainly concentrated in her legs and hips at that time, she also had no use of her right arm and hand. Even today, it’s still hard for Lauren to hold a crop or draw reins in her right hand. Still, she found a way to succeed at each goal or task that was put in front of her, like she always does.  Lauren would say that different horses have taught her different lessons and have forced her body to learn to adapt and be (literally and figuratively) flexible. A fierce competitor, Lauren has garnered the Long Island Horse Show Series for Riders with Disabilities (LIHSSRD) Grand Championship in 2016 and 2017 with two different horses. Quite an accomplishment!

“I choose to call it a disability. I don’t find anything wrong with the word. Generally speaking, there tends to be a stigma around the word “disability”. Many people choose to say, “differently abled”, which to me, seems like sugar-coating,” Lauren says. “My perception of my disability has changed immensely over the years. As a kid, my disability occasionally left me feeling sort of powerless and frustrated when I had no choice but to isolate myself from my friends.” Lauren used to be in a wheelchair, then she got a walker, a cane, and eventually the handy crutches she now uses to get around.

At 18, Lauren has taken up public speaking as well her riding, which has forced her to gain self-awareness and perspective*.  She can now confidently say that she is truly secure in herself and in her identity as someone with a disability, not noticing critical people on the street anymore. As much as riding has been about rehabilitating her body, it has done even more for Lauren’s mind and character. Besides grit and control, horses themselves have taught her a lot about patience and communication. Lauren Reischer is adored by both her friends in New York City and her barn family in East Quogue, Long Island. She is now on her way to Ivy League school, Brown University, with her new horse, Joker.

Messages Lauren has to offer to kids with disabilities:

*Note: Lauren has spoken on the stage of TedxDaltonSchool, has been in the Southampton Press, and has achieved many more accomplishments.

How To Get Into The Lucrative Field Of Betting On Horse...