Home Blogs Where Did My Pony Come From? 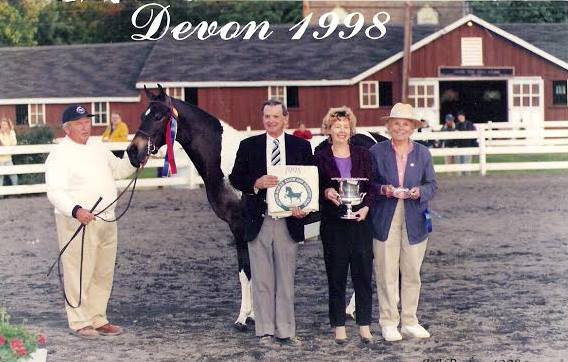 Thoughts on name prefixes and suffixes

Once upon a time, it was considered very prestigious to own and show a pony with a known prefix. You knew the breeder or at least the farm where your pony was born and something about its sire and dam. These days, people buy a pony and many immediately change its name or, worse yet, drop the breeder’s prefix. Why? Are they trying to change the pony’s age to get a measurement card? Do they want to conceal a bad performance record? Maybe they want to keep their purchase source a secret?

It is a huge hardship for the breeder when this occurs. When you’ve spent years developing a breeding program (which isn’t done overnight), you have earned the opportunity to be recognized when your animal does well. Keeping a breeder’s prefix builds recognition for that individual or farm – a “branding” of sorts for that individual.

From my perspective as a breeder, prefixes matter a great deal! They provide valuable information about the ability of a particular pony to help perpetuate a particular breeding program. Especially for breeding programs that I admire, the presence of a prefix – or lack thereof – speaks volumes to me about individual ponies.

The Welsh Pony & Cob Society of America does not allow you to change the name of a pony with a registered prefix without the permission of the person that owns the prefix. The Virginia Pony Breeders Association cites the following:

A registered prefix name belongs to a pony for its lifetime.

A breeder prefix has many purposes, including:

To identify a pony as being from a certain breeder’s program.
To help keep track of a pony throughout its lifetime.
To be of service in tracing pedigrees.

In my opinion, once a pony or horse has been recorded by the breeder using a prefix or suffix, the animal should carry that prefix with it for the rest of their life. Names may be changed, but breeder identifying name markers (prefixes or suffixes) may not. The USEF should support American breeding programs as the source of many of the competition animals it records. Microchips will provide the information, but it’s the “identity name” (or prefix) that is announced when the animal is showing and how the pony (or horse) is entered on a prize list entry form, that is important. When a horse or pony enters the ring, a spectator cannot hold a microchip gun to learn who the breeder is. If a prefix is used, the information is always apparent.

As an industry, let us consider a USEF rule to mandate keeping a breeder’s prefix or suffix for the entirety of a horse or pony’s career. Honor the many who endeavor to breed great animals in the United States by acknowledging their progeny. By offering a discounted fee, the USEF encourages breeders to record their babies in the year of their birth, and most breeders do this at the suggestion of the organization. Currently, with the USEF, there is the ability to record a “Farm, Corporation, Syndicate or Partnership” for a one time fee of $200.
I wish to put forward a new rule allowing breeders that use a prefix to record their prefix with the USEF (a one-time recording payment). Then, if a prefix (or suffix for the breeder that uses their initials or their farm initials) is registered and the foal is recorded with that prefix, the name may be changed going forward, but the prefix cannot be dropped.

In speaking with “Hetty” Mackay-Smith Abeles, owner of Farnley Farm, the point was made regarding future sales of successful ponies. “How would you be able to purchase a full sibling if you didn’t know where the pony came from?” Farnley Farm has bred generation after generation of successful ponies and can attest to pedigrees getting dropped or even people wanted to add a Farnley pedigree when the pony wasn’t bred by Farnley!

Sandy Holbrook, breeder of the Sugarbrook ponies, had these thoughts to share:

“What does a prefix on a pony’s name mean?  It means that the person who created that prefix spent years developing a fantastic breeding program.  It means that blood, sweat, and many, many tears have gone into breeding and raising your pony that carries the prefix.  The history behind that prefix is why your child has a pony that not only wins, but is also safe, loving, trustworthy, and your child’s best friend. Having that prefix means you can go back for years and years to see what other pony siblings came from that farm.  This is easy because the prefix is the first thing you see on the pony’s name and most importantly, it is what is announced in the show ring.  Without a prefix, none of this is possible – you have no idea where your pony came from – and you lose bragging rights that you own a pony with famous breeding.

I have personally lived through the disappointment of having trainers and customers “drop” my prefix in exchange for a name that is meaningless to the pony’s heritage (if I may call it that).  I am beyond proud of the ponies with my prefix and hope that my prefix gives confidence to potential owners that they will own a pony that was raised with love and experience. When I explain to new owners the importance of keeping a prefix for the life of the pony, I am sometimes (not always) confronted with an innocent misunderstanding of why that is important.  This misunderstanding could be easily remedied with a simple rule.  People understand rules!  It would be so simple if USEF would simply do as the Virginia Pony Breeders Association and The Welsh Pony and Cob Society do and not let the registered name be changed.

I see all too frequently large breeding farms closing their doors.  What if we ALL did that?  Where would “Pony Land” be?  This, I am sure, is something that most people haven’t considered. All we are asking is for one simple rule change.  As a proud pony-breeder, I have one question:  how many of you in “Pony Land” are willing to join us breeders in asking USEF to enact a rule requiring the Prefix to remain with the pony for life?

I think we can make this happen.  No doubt, it will take work on our part, but I believe USEF will be willing to listen if we have support from YOU.”

I contacted Denny Emerson, owner of Tamarack Hill Farms, accomplished equestrian, clinician, trainer, and breeder and he had the following to say: “As one who grew up with Morgans, prefixes were totally the norm – Lippitt, Orcland, Waseeka, Windcrest, Broadwall. I could not imagine changing a named foal into one which ignores the breeder, so I would support your mission.”

In closing, a new rule for American Breeders that have worked hard to establish a quality breeding program, and have created a prefix to identify the nies or horses they breed is long overdue. Our American bred ponies and horses face an industry that is starting to deal more and more with people importing from Europe. We breed outstanding hunter ponies and horses in this country and they need to be supported by our governing organization.

By supporting a one-time payment to the USEF to register your prefix and then to record your foals using your prefix as part of their name, you will encourage growth and the promotion of quality in our American industry and a standard by which these animals may be measured. Prefixes that are over 30 years old and still actively breeding ponies:

Randee Beckman is an established pony breeder and USEF Hunter Breeding Judge. At her Otteridge Farm, generations of successful show ponies have been born, as recently as this year’s 2017 Devon Horse Show “Best Young Pony”, Otteridge Top Secret. A USEF search of the Otteridge prefix yields multiple pages of results. Through a farm name or initial, breeders are able to identify the product of their breeding programs, thereby promoting themselves. Unfortunate for U.S. breeders, many horses’ names are changed when they are sold, erasing the mark of the breeder. Beckman advocates USEF legislation preventing the erasure of name prefixes or suffixes as a way to support American breeders.