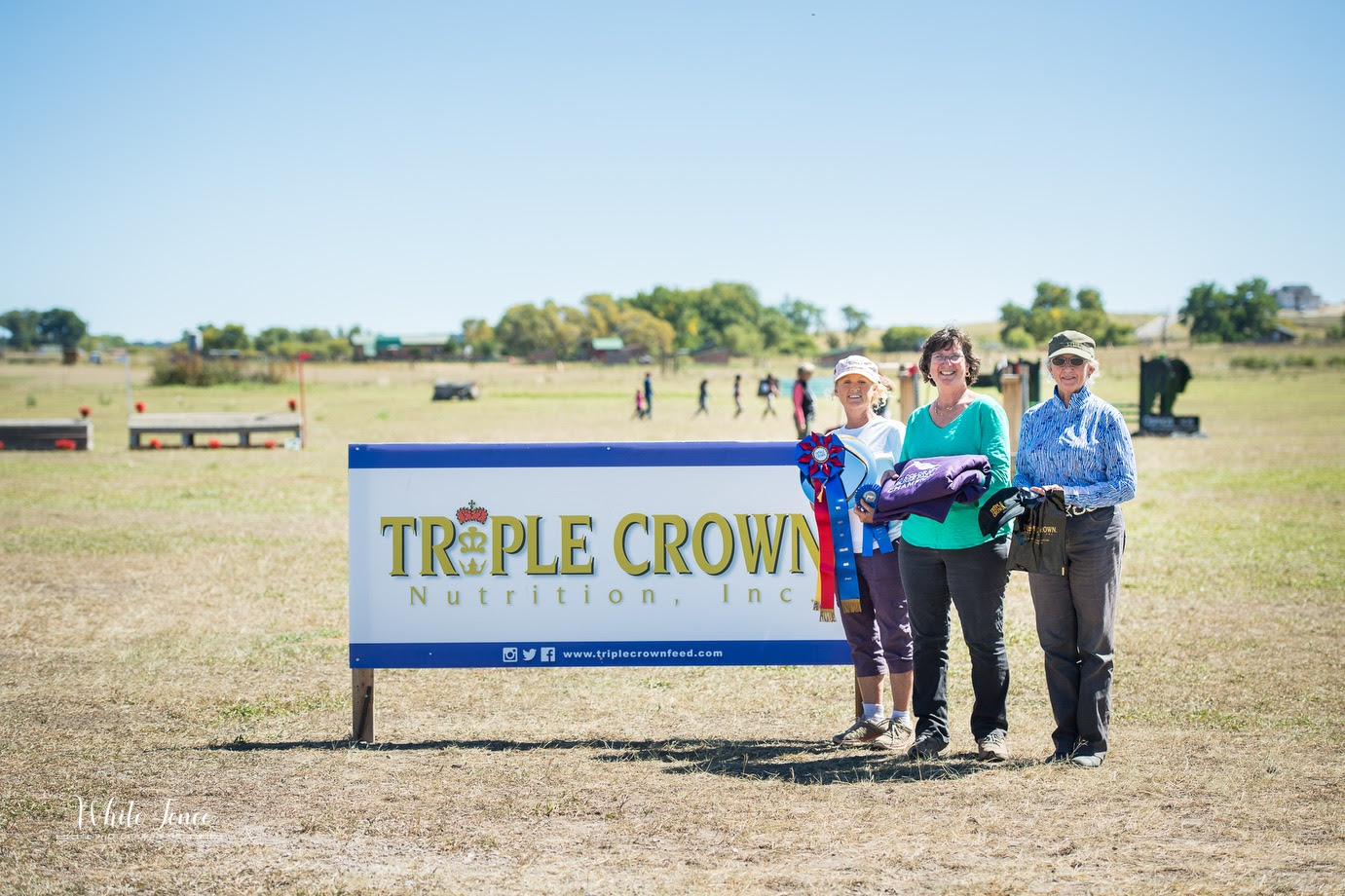 Parker, CO (September 28, 2017) – Triple Crown® Nutrition, an enthusiastic sponsor of equestrian events at The Colorado Horse Park, has found another member of the eventing community to reward with its own Excellence Award. Angelika Beutel, of Longmont, Colorado, was presented with the award from Triple Crown after winning the Triple Crown Beginner Novice Event Derby earlier this month aboard Harrison, a handsome 6-year-old Oldenburg (Harvard x Pirrouette) owned by Sally Dalton.

Beutel was chosen to receive the award, which included a beautiful tri-colored ribbon and an engraved silver award tray, for her exceptional commitment to achievement within the equestrian community aboard a healthy and fit equine partner.

Dalton, who also rides and shows Harrison, (barn name Harry) has owned the mount for about a year and half. She proudly explained how Harry’s bloodlines have helped him become a winning horse and a pleasure to be around.

“Harry’s sire was Harvard, a Hanoverian German import who is one of Canada’s top Dressage stallions, known for his wonderful temperament. Harry inherited his striking good looks and friendly temperament from him. His dam Pirouette is the granddaughter of Pik Solo.”

Remarking on Harry’s path to success, Beutel explained, “This is Harry’s first year eventing. He is very easy to keep fit. I use a track at my barn and then go to Sally’s farm where there is a cross-country course.”

Beutel also competed Harry in the Horse Trials in the Open Beginner Novice division where he placed second. In addition, she won the Derby’s Training Division with Just Alfie, a 6-year-old Dutch Warmblood owned by Julie Pawlak.

Beutel described Harry’s lovable temperament and goals for the horse’s future, saying, “He has a pretty quirky personality, but he’s a good boy. Sometimes, he can be slightly lazy, but he’s just so sweet, and I love him. I’ve had him in my program since he was three. We will focus on dressage for the rest of the year, and then hopefully he can go out at Novice level next year.”

Beutel, who moved to Colorado 12 years ago from Germany, now trains out of Hobby Horse Farms in Firestone, Colorado. She hopes her love of training young horses up the levels will eventually produce an eventing two-star horse. Beutel has been a regular competitor at The Colorado Horse Park for some time. “It’s a great facility,” she remarked. “I thought the Eventing Derby was wonderful. It was harder than we all thought it was going to be, because of the tight turns and some of the more technical aspects, but I think they should do more of them!” Beutel is particularly thankful for her Excellence Award. “It’s great to have such good sponsors like Triple Crown. I was positively surprised to win!”

Based in Wayzata, Minnesota, Triple Crown was the first company to add prebiotics, probiotics, and organic minerals to horse feed. Today, the company continues to deliver the very best in equine nutrition with its revolutionary formulations and premium quality ingredients.